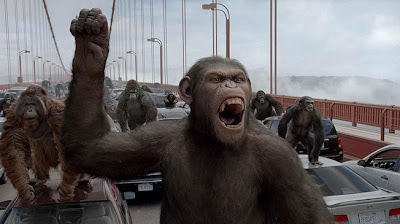 And lo, the gods of cinema did hear the hue and cry of the people, and finally they did right the grievous wrong that was the 2001 version of PLANET OF THE APES. A new APES film was bestowed upon the earth and it was good. Very, very, good. Yea, verily the curse of Tim Burton was broken, and there was much rejoicing.

-excerpt from The Chronicles of Cinematic Recompense

Like many children of the Seventies, I was a staunch supporter of the era's "Ape-mania," loving the PLANET OF THE APES movies and a good deal of their attendant fallout. The sci-fi pickings in the pre-STAR WARS days were pretty feeble, so when a series of films that were (mostly) pretty damned good came along, you cherished it. The APES movies all featured a good deal of social commentary/satire on subjects such as racism, religion vs. science/anthropology, nuclear self-destruction and the ethical vagaries of vivisection, and the pondering of those things while wrapped in allegorical sci-fi trappings was something that stirred the young minds of my generation. So when it was announced that there would be a new APES movie made in the wake of Tim Burton's decade-old abortion, I questioned whether the new film would follow Burton's brain-dead lead or be some kind of return to something a tad more intellectually stimulating. (In today's utterly mindless cinematic climate of movies by committee, I did not hold out much hope.) What I got was totally not what I expected and I could not be happier with the results.

In modern day San Francisco, scientist Will Rodman (James Franco) seeks a cure for Alzheimer's, something sorely needed by his aging father (John Lithgow) whose mind is deteriorating on a daily basis. Working within the corporate labs of the Gen-Sys pharmaceutical corporation, Rodman develops a serum that when tested on chimpanzees causes the brain to repair itself and generate new neural pathways, fixing Alzheimer's and boosting intelligence to amazing levels. Following an incident in which a particularly gifted female test subject, "Bright Eyes," goes berserk and escapes from the lab, resulting in her being gunned down by corporate security during the meeting that would have led to the greenlighting of the drug's testing on human subjects, it is revealed that that she was protecting the baby she had given birth to and hidden below her bed. Ruling the drug a failure, Rodman's money-hungry boss orders all of the test chimps destroyed, but since the baby was discovered after its mother's rampage and is thus known only to Rodman and the lab's chimp-handler, Rodman adopts the adorable little orphan and raises him at home in secret. For the next eight years, the chimpanzee, dubbed "Caesar," enjoys life in a loving home where he forms deep familial bonds with Doctor Rodman and his dad. Unbeknownst to his Gen-Sys superiors, Rodman continues the testing of the drug on his father and the results are both swift and spectacular. Meanwhile, Caesar displays intelligence far beyond the garden variety chimp, even exhibiting functioning and skills beyond humans of a relative age and development. (Though Caesar himself was not directly administered the experimental drug, his mother sure as hell was and the effects of the serum are proven to be genetically transmissible.) But things take a turn for the worse when the drug's effects upon the elder Rodman are reversed as the old man's body builds an immunity to it. Wandering into the street, the confused old man gets into a confrontation with the next door neighbor that is observed by Caesar, who launches into violent defense of his family member. Though the neighbor is not killed, poor Caesar is court ordered into the custody of a specialized home for great apes, a place where our simian protagonist experiences firsthand just how cruel man can be. It is during this incarceration that Caesar's resentment of mankind is forged, and from there he launches a revolt that — along with a couple of other factors that I won't spoil — leads to the beginning of the end for the human race's planetwide dominance.

RISE OF THE PLANET OF THE APES comes from out of nowhere (and from beneath the shadow of Tim Burton's atrocity) to not only be my favorite film of the summer blockbuster season, but also takes its well-deserved place as one of the best major studio films of the year. The script is surprisingly intelligent and does not at all cater to the moronic demographic Hollywood has spent well over a decade dishing out mindless celluloid candyfloss to by the truckload. I honestly believe the filmmakers involved looked at the Burton fiasco (and also some of the gaffes made in most of the films in the original series) and decided not to make the same mistakes as what came before. This is the origin story of Caesar I had never dared to hope for, and I have every intention of seeing it at least once more during its theatrical run.

Items of note in the film:
And there has been much discussion in the media and in online geek forums of how obviously impossible it would be for a relatively small force of apes, even organized and super-intelligent ones, to take on armed police and the national guard and have even the slightest chance of winning, but let me assure you that that question is very directly addressed and the answer quite satisfyingly requires very little suspension of disbelief. Hell, I bought it and I am one exceedingly critical son of a bitch. Believe that!

BOTTOM LINE: I simply loved RISE OF THE PLANET OF THE APES and very highly recommend that you see it in the theater. A franchise movie of this caliber that does not talk down to its audience is rare indeed, and it should be shown appreciation with your box office cash. But one word of warning: The story gets very emotionally intense in some areas and it greatly affected the grownups in the audience, so bear in mind how children react to animal characters that they come to care about. Kids will love Caesar, so expect them to become quite upset during a lot of what he goes through. (Plus to say nothing of the awful demise of his mother.)
Posted by Bunche (pop culture ronin) at Friday, August 05, 2011

The first Planet of the Apes totally blew me away. I remember waking up the next morning scared shitless and looking up atomic bombs in the encyclopedia (lol, that's a funny image nowadays. we actually had an old, out of date set in our house).

If I was raising a super-intelligent chimp I would name him Ghandi.

I cant wait to see this! "Apes Week" on the 4:30 Movie was always greatly anticipated by me. Remember, these were still the pre-VCR days.

I love that theres a character called "Dodge Landon". I'm sure the film is chock full of nods to its predecessors that geeks like me will love spotting.

I particularly loved the one liner the POS delivered in the ape jail...ode to Mr. Charlton Heston himself. Classic!

There were a lot of great nods to the original film in this new one. I loved it and I wonder what the premise of the sequel will be?

Well now I will actually go see it! I have had enough of the precious flowers of my childhood being debauched, the Burton atrocity being a case in point. I had just assumed this would be more of the same Hollywood bullshit, but apparently not. Thanks for this review!

This was that rare, rare summer sci fi movie, it is well written directed and acted a fucking good movie and not just a mindless "block buster". This thing is well thought out. In the 60s and especially with writers like Rod Serling the greatest threat to man's existence was all out nuclear war but now it's genetic engineering and super viruses. Keep your transformers and JJ Abramss raped corpse of Star Trek give me more of this.

Why weren't the national guard alerted, probably wasn't enough time to get to the Governor and mobilize the troops and also most of them were most likely in Iraq anyway.