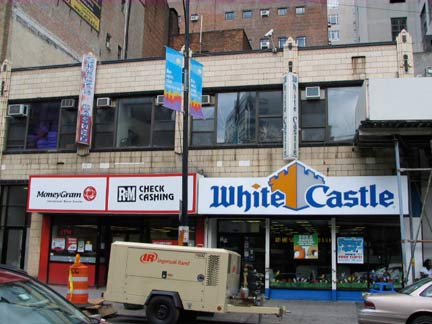 The White Castle on Willoughby Street in downtown Brooklyn's Fulton Mall area: a wretched hive of scum and villainy.

Welcome to the first installment in a new series of posts wherein I'll be chronicling the madness I experience every time I get "the crave" and decide to stop in at any of the city's fine White Castle burger joints, but most especially the people-watching Mecca that is the one to be found on Willoughby Street in Brooklyn's ghetto-licious Fulton Mall area.

On Tuesday afternoon, the East Coast experienced an earthquake that reportedly measured 5.8 on the Richter scale. It shook my building a bit, rousing me from a nap and prompting me to leave before my massive industrial bookcase fell over and crushed me, but fortunately no damage occurred.

About an hour after the quake, I went to grab a snack at the infamous Fulton Mall White Castle and the place was filled with scared black people like something out of a stereotypical film made in the 1930's. Most memorable was the fat old woman who stood up and announced — I swear on my mother's eyes that this really happened — "Well, lord, if I was meant to die today, I had me some White Castles, some fries, and a drink. Now I'm goin' home and pray. Thank you, Jesus, thank you lord!" after which she stopped at the joint's exit, dropped to her knees and venerated like she was worshiping some pagan idol. She did this for three or four genuflections before finally leaving. Even the ultra-ghetto and usually unfazable White Castle loiterers were taken aback by that one. All that was missing was Mantan Moreland, with his eyes about to explode out of his skull, growling "Feets, don't fail me now!"

The other notable event during the visit was the charming sight of an old man who appeared to have passed out at his table and, due to his utter lack of visible breathing or any form of reaction when one of the staff sprayed and wiped down the table while physically avoiding him, may have actually died upon finishing his sliders. (see below) 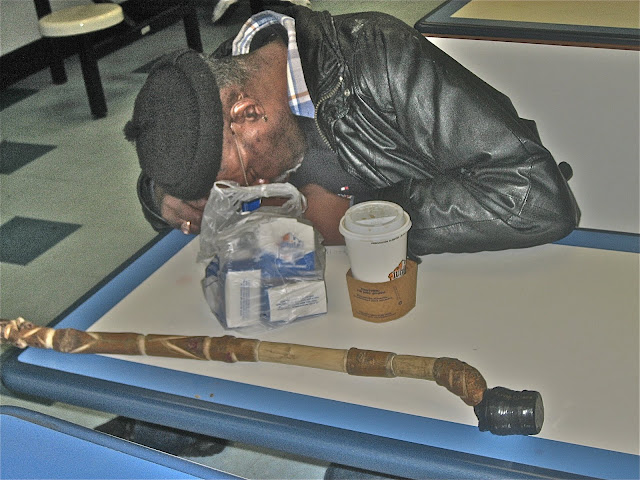