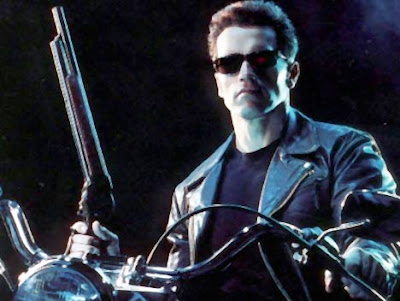 The magnificence of Ah-nuld as the now-iconic T-101.
The other day, I had TERMINATOR 3: RISE OF THE MACHINES playing in the background for noise and it made me wonder: if Cyberdyne Systems, the company that built the Terminator (and its identical assembly line brethren), was based in the United States, why was the T-101 model issued with an Austrian accent? I posed that query on Facebook and no sooner than I asked, my friend Mindless Kirby responded with a link to deleted footage from TERMINATOR 3: RISE OF THE MACHINES that answered that very question in grand style:

Now what I want to know is why in hell they opted to delete this from the final cut of the film?
Posted by Bunche (pop culture ronin) at Tuesday, November 01, 2011

I like to think Sgt. William Candy survived Judgement Day...

My theory is that it was just played too silly and in-jokey for the test audiences.

I remember this was included as an extra on the Terminator 3: Rise of the Machines video game for PS2, as an incentive to get people to buy it. The funny thing is, it was unlocked after you beat the first level.