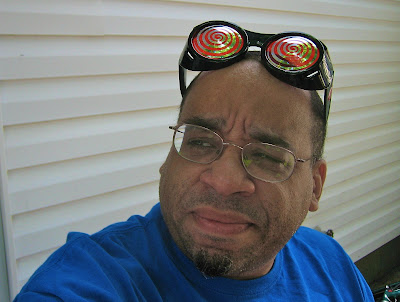 Hey, folks. Time for one of my periodic updates on what's going on here in my world outside of the Internet dimension. In a nutshell, I'm not doing great but I'm trying my best to keep a positive outlook on things. Nonetheless, the current state of affairs has left me rather unmotivated to write for this here blog, so please bear with my present dry spell.

The year began with me breaking up with my girlfriend — who, let us remember, was not a villain — and I have to admit that I was romantically gun shy for quite a while after that transpired. I believe I'm ready to start dating again, or at least I feel okay with it on a conceptual level. The problem with that is that there are no prospects at the moment. Well, maybe there is one, just maybe, but I have to really think about that...

I skipped Halloween because I just wasn't feeling it this year. Also there were no parties and none of my friends were really doing anything. Plus, Halloween kinda sucks without a squeeze to share it with. I've done Halloween stag many times in the past but nothing compares to that glorious day when I have a comely female accompanying me in a costume that I get to chew off of her at the end of the night.

After a fruitless year and a half of job-searching, my unemployment finally benefits run out this Wednesday. I have some small money socked away and there are also other resources that I would prefer not to rely on but one has to do what one has to do. I've applied for a job that I am perfectly suited for but so far there has been no response, but it's still early in the game, so I am remaining positive.

I'm heading home for Thanksgiving and all I'm really looking forward to about that is the eating. (Like my fat ass needs any more poundage added to it...) While at home, I'll have to try and stay sane during the annual horror that is the Macy's Thanksgiving Day Parade, that three-hour nightmare on wheels/thinly disguised long-form commercial that my mother insists on watching with the volume cranked up to 11. I'll also have to deal with her twitchy nervousness and hand-wringing over my state of employment, or lack thereof, while also fielding her endless directions about how to proceed in publishing or the comics biz, both areas that she knows absolutely nothing about, yet she refuses to cop to her ignorance. I swear, when she goes off in that mode, I just want to shove her head through the house's sheet rock with as much force as I can muster. She means well, but I wish she wouldn't act like an authority on something she knows nothing whatsoever about, especially not when it's a field that I was involved in as a professional for over a decade and something that I'm still involved with as a comics biz journalist.

In other news, I was tapped by my dear old friend Amanda to write the text for IDW's art book on her work. It was a breeze for me to write since I've watched her artistic progress with a keen eye since we were co-slackers in our tenth grade algebra class, and the project was a true labor of love. And who knows? Maybe my involvement with that book will open doors to the next phase in my journey.

And while I don't have actual plans for New Year's, I do have a dear friend coming down from Maine to spend it with me. I miss her being around in NYC, so even the briefest of visits will suit me just fine.

So that's where things stand at the moment. Stay tuned and thanks for your continued support.
Posted by Bunche (pop culture ronin) at Monday, November 21, 2011

Hang in there, man. it's tough out there!

As Ian McNiece aka Winston Churchill from Dr Who told me at NYCC this year, KBO - Keep Buggering On !

The world is a messy state of affairs for a lot of us dude, so all I can say from a mutual standpoint is to prevail and keep focused. It was amusing to read how your Mom is an authority on your pursuits and I must admit mine is as well. Love her to death but she needs to understand the whole "making a decent living" from a passion/pursuit such as my own is often a fruitless chase. We do what we love and hope something grand comes of it. Oh well.

I so enjoy your posts, they encourage my own to some extent. Be strong and always remember you got some buddies out there. Horns up!!!