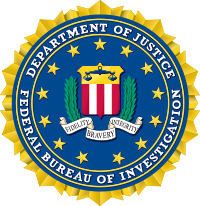 As noted several times over the years on this blog, I constantly receive emails that attempt to prey upon perceived fears and try to separate me from what little money I have or attempt to get me to fork over all my information, passwords, you name it. Well, this morning's attempt takes the cake and I will let it speak for itself, unedited, other than to note that save for its subject, the email itself was blank and I had to open an attachment to read the actual letter. Check this shit out:

Subject: FBI OFFICIAL NOTICE///FBI OFFICE GET BACK TO US IMMEDIATELY IF YOU DONT WANT US TO ARREST YOU AND JAIL YOU FOR YOUR OWN G0OD
Anti-Terrorist and Monetary Crimes Division
Fbi Headquarters In Washington, D.C.
Federal Bureau Of Investigation
J. Edgar Hoover Building
935 Pennsylvania Avenue, NW Washington, D.C. 20535-0001 Website: www.fbi.gov

Attention, this is the final warning you are going to receive from me do you get me?

I hope youre understand how many times this message has been sent to you?.

We have warned you so many times and you have decided to ignore our e-mails or because you believe we have not been instructed to get you arrested, and today if you fail to respond back to us with the payment then, we would first send a letter to the mayor of the city where you reside and direct them to close your bank account until you have been jailed and all your properties will be confiscated by the fbi. We would also send a letter to the company/agency that you are working for so that they could get you fired until we are through with our investigations because a suspect is not suppose to be working for the government or any private organization.

Your id which we have in our database been sent to all the crimes agencies in America for them to inset you in their website as an internet fraudsters and to warn people from having any deals with you. This would have been solved all this while if you had gotten the certificate signed, endorsed and stamped as you where instructed in the e-mail below. this is the federal bureau of investigation (FBI) am writing in response to the e-mail you sent to us and am using this medium to inform you that there is no more time left to waste because you have been given from the 3rd of January. As stated earlier to have the document endorsed, signed and stamped without failure and you must adhere to this directives to avoid you blaming yourself at last when we must have arrested and jailed you for life and all your properties confiscated.

You failed to comply with our directives and that was the reason why we didn't hear from you on the 3rd as our director has already been notified about you get the process completed yesterday and right now the warrant of arrest has been signed against you and it will be carried out in the next 48hours as strictly signed by the fbi director. We have investigated and found out that you didn't have any idea when the fraudulent deal was committed with your information's/identity and right now if you id is placed on our website as a wanted person, i believe you know that it will be a shame to you and your entire family because after then it will be announce in all the local channels that you are wanted by the fbi.

As a good Christian and a honest man, I decided to see how i could be of help to you because i would not be happy to see you end up in jail and all your properties confiscated all because your information's was used to carry out a fraudulent transactions, i called the EFCC and they directed me to a private attorney who could help you get the process done and he stated that he will endorse, sign and stamp the document at the sum of $120.00 usd only and i believe this process is cheaper for you. You need to do everything possible within today and tomorrow to get this process done because our director has called to inform me that the warrant of arrest has been signed against you and once it has been approved, then the arrest will be carried out, and from our investigations we learnt that you were the person that forwarded your identity to one impostor/fraudsters in Nigeria when he had a deal with you about the transfer of some illegal funds into your bank account which is valued at the sum of $10.500,000.00 usd.

I pleaded on your behalf so that this agency could give you the 11/06/2011 so that you could get this process done because i learnt that you were sent several e-mail without getting a response from you, please bear it in mind that this is the only way that i can be able to help you at this moment or you would have to face the law and its consequences once it has befall on you. You would make the payment through western union money transfer with the below details.

Send the payment details to me which are senders name and address, mtcn number, text question and answer used and the amount sent. Make sure that you didn't hesitate making the payment down to the agency by today so that they could have the certificate endorsed, signed and stamped immediately without any further delay. After all this process has been carried out, then we would have to proceed to the bank for the transfer of your compensation funds which is valued at the sum of $10.500,000.00 usd which was suppose to have been transferred to you all this while.

Note/ all the crimes agencies have been contacted on this regards and we shall trace and arrest you if you disregard this instructions. You are given a grace today to make the payment for the document after which your failure to do that will attract a maximum arrest and finally you will be appearing in court for act of terrorism, money laundering and drug trafficking charges, so be warned not to try any thing funny because you are been watched.

THANKS FOR YOUR CO-OPERATION.

So much of the FBI´s business is done through Nigeria now...

It's nice to see that the FBI's "Robert Mueller II" has such a good command of his native tongue, and is able to construct sentences in such a clear and easily comprehended manner.

The really unnerving aspect of this scam is that there will undoubtedly be people who are actually duped by it.