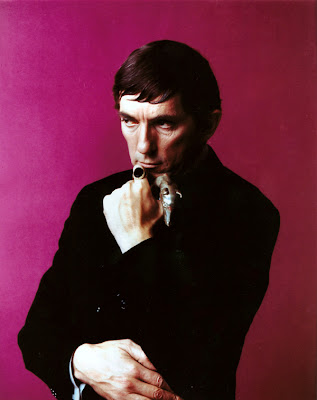 To horror fans of a certain age, the passing of Canadian actor Jonathan Frid truly marks the end of an era. Virtually forgotten after the advent of the 1970's, Frid enjoyed massive popularity as Barnabas Collins (seen at left), the sympathetic tragic vampire hero of DARK SHADOWS, an ABC daytime soap opera that ran from 1966-1971.
DARK SHADOWS started out inauspiciously as a straight Gothic soap opera that failed to light up the afternoon ratings, so when faced with cancellation the show-runners said "What have we got to lose?" and added Barnabas Collins, a late-18th century vampire, to the mix. (That move coincided with a renewed interest in old school horror and its archetypes that took place in the 1960's, as evidenced with the proliferation of stuff like FAMOUS MONSTERS OF FILMLAND magazine and the long-running line of classic movie monster model kits released by the Aurora company, a pop culture resurrection seen by some pop culture analysts as a reaction to the horrors of the Vietnam conflict.) The addition of the undead suckface did the trick and unexpectedly saved DARK SHADOWS from being relegated to the limbo of television obscura, propelling it almost overnight into the stratosphere of cult adulation, after which the series abruptly ended in 1971 without even bothering to give its viewers a proper ending to its storylines.
During DARK SHADOWS' four years as a pop culture phenomenon (its first year doesn't really count), Barnabas Collins became an ubiquitous presence and generated tons of merchandise while also appearing in the first of two theatrical translations of the TV series, HOUSE OF DARK SHADOWS (1970). With his unfortunate backstory and messed-up and largely miserable then-present day existence at Collinwood, fans took the 200-year-old vampire to heart and Jonathan Frid found himself admired as an unlikely sex symbol. His angst and drama-laden un-life can now be seen as a direct precursor to Anne Rice's VAMPRE CHRONICLES, the vampire-as-hunk Angel from BUFFY THE VAMPIRE SLAYER, and the TWILIGHT deluge, only with Barnabas coming off as quite manly in a tortured way, as opposed to the flamboyant, egomaniacal foppery of Lestat de Lioncourt or the unintentionally-creepy emo stalker antics of Edward Cullen. (Angel gets a pass because he was pretty cool and he was all about the pussy in a non-Cullenesque way, plus he could be terrifying when necessary.) It's interesting to see that though Barnabas Collins had his roots in soap opera, he could still be a creature of genuine horror, while some of his more recent pop culture descendants contributed much that led to the current state of vampires as a pack of decidedly un-scary douchebags. I personally could not see Lestat or Edward having the stones to last more than a few moments in the presence of Christopher Lee's Count Dracula, while Barnabas would definitely have been able to hang and maybe even engage in some very interesting conversation on the actions that led both himself and the Count to their current positions as accursed and unholy creatures of the night. Which is not to say that Barnabas' soap opera origins did not lend him a certain cheesy floridness, as is evidenced in this cut from the DARK SHADOWS soundtrack LP, featuring Frid's singular tones as accompanied by what sounds like an electric sitar.
But all things must pass and just as DARK SHADOWS' time on the first-run airwaves did, so now has Frid, and with that in mind I bid him a fond rest and hope he has a better time of it than his most lasting thespic creation ever did.
Posted by Bunche (pop culture ronin) at Thursday, April 19, 2012

And yet another part of my youth slips away into eternity. Now cracks a noble heart. Good-night, sweet prince; And flights of angels sing thee to thy rest.

How fitting that his last acting work was as an older version of Barnabas in the new Dark Shadows film.

I seek show on Ozon.Ru but not appear. Purchase show is it possible?