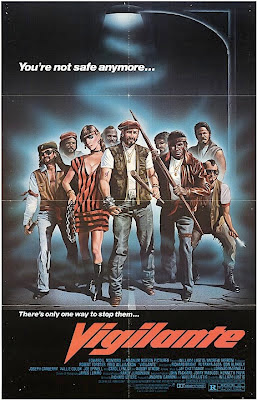 A minor classic of the "NYC violence/revenge" exploitation sub-genre, VIGILANTE is a film that greatly disturbed me when it came out, so once it finally became available on DVD, I decided to revisit it after nearly thirty years and see if it could possibly still affect me in such a way after all the nasty, nasty shit I've seen in movies since I was eighteen. 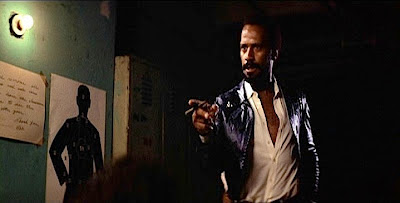 My man Fred Williamson as Nick, the very definition of the well-intentioned sociopath.

With VIGILANTE, director William Lustig — he of MANIAC (1980) infamy — crafts an '80's-to-the-core take on the established DEATH WISH scenario that opens with a pre-credits introduction to a group of citizens receiving a pep talk from a stogie-chomping Nick (my man Fred Williamson), the leader of the local "neighborhood watch," a cadre of toughs who handle what the police can't (or won't). This sequence sets the tone for the film's tense and dour attitude as Nick makes plain just how fucking sick he is of seeing the city become a morass of muggings, rape, drug dealing and all that kind of mess, with his speech serving to simultaneously rouse the territorially protective sentiments of the locals and possibly put the film's audience into a like mindset. That intro swiftly segues into the story proper, which begins with a woman entering the elevator in her tenement building, only to be abducted by a knife-wielding creep who hauls her up to the roof and rapes her (which we thankfully only see the preamble to). One of the building's residents, an elderly woman who was taking out her trash, witnesses the rapist making his escape, so none of the locals cooperate with the cops during their investigation because thanks to the old lady the vigilantes are on the case...

Contrasting Nick's no-nonsense eye-for-an-eye-ism is Eddie Marino, played by Robert Forster (who was excellent in JACKIE BROWN), an average Joe who's a mellow factory worker and doting family man who's also one of Nick's co-workers. When Eddie, Nick and some of their co-workers — who are also vigilantes — stop by a bar for some after work beers, one of the neighborhood cops drops in to cryptically warn that he and his fellow cops don't take kindly to citizens taking the law into their own hands and beating the living piss out of deserving scum. This exchange leads Eddie to ask Nick what it was all about, so Nick fills Eddie in on the whole vigilante posse thing. Since he's an optimist who sees a bright future for his family, Eddie isn't down with it and even asks Nick how he knows if he's any better than the vermin he opposes. Nick tellingly responds with how that's up to the individual to decide...

Once those opposing viewpoints are established, it's only moments until Eddie's wife runs afoul of Rico (Willie Colón), the vile leader of the equally-scabrous Headhunters street gang, whom she slaps in the face for dousing a gas station attendant with fuel when the attendant objects to the punk refusing to pay for a just-pumped tankful of gas. Followed home by Rico and his gang of scurvy thugs, she immediately finds herself on the receiving end of a home invasion that results in her toddler son being blown out of the third story window by a blast from a sawed-off shotgun and her barely surviving crippling injuries thanks to a stabbing just after witnessing her son's savage murder. 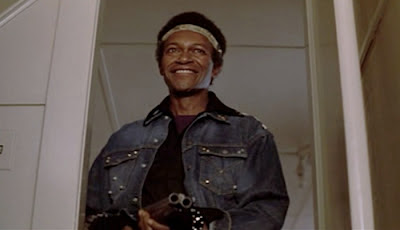 Prago (Don Blakely), all smiles a moment before blowing a toddler out a third-story window with a sawed-off shotgun.

When Rico, who has a rap sheet a mile long, is hauled in as the child's killer and receives a suspended sentence of two years from the corrupt judge, Eddie goes berserk in the court room and is himself sent up the river to Riker's Island for thirty days on a contempt of court charge. The rub here is that the actual killer of the child is gang member Prago (Don Blakely), but that plot point does not get addressed until the film's final act.

Once Eddie's in the slammer, legendary cinema badass Woody Strode protects him from being raped by a dude who looks like the sepia version of the Incredible Hulk, and during his stay we are led to believe that Eddie becomes hardened enough to willingly join Nick's vigilante force in order to exact even a measure of justice for his family. 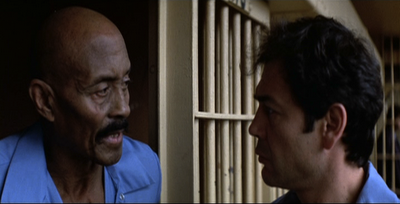 "Thanks for the save from the shower room bufu, awesome nameless old dude!"

Meanwhile, during Eddie's absence, Nick and his posse have crossed the line from merely roughing-up creeps to outright outright murder, even killing folks who are not directly involved in the street messes the vigilantes seek to avenge, such as a crooked politician's driver and Rico's girlfriend. So it's a case of justifiable rage escalating into the realm of irredeemable, and once his court-mandated month in the slammer is up, Eddie's right there with Nick and friends in the thick of the lethal vengeance. Eddie even goes so far as to murder Prago — whose fall from a great height results in a great image of his body laying on the pavement with its brains splattered out — and he also suddenly gains expertise with rigging remote-controlled explosives that he uses to assassinate the corrupt judge who sent him to jail. The film then very abruptly ends with Eddie and the rest of the vigilantes still roaming the streets, presumably to continue killing at will.

The film goes out of its way to state that it's not an endorsement of vigilantism and depicts its well-meaning neighborhood patrol as every bit as savage as the scum they forcibly remove from the streets in their none-too-subtle black van and I suppose the ending was meant to be some sort of mordant commentary but the ending left me deeply saddened and in need of something to cleanse my palate of the bleakness piled on during the film's running time. When I first saw VIGILANTE, I had just arrived at college and had yet to undergo the considerable corruption and jading that my college years afforded me, so I was still not as de-sensitized by the excesses of certain types of exploitation fare as I would eventually become. I love urban vengeance films, having been a fan of the genre since seeing the original DEATH WISH (1974), but VIGILANTE goes into darker areas that are rendered pitch black by the grimy exploitation-style filmmaking (which is not to say that the film is not well-made) and the result is one of the biggest downers in the sub-genre. We see Eddie go from a loving family man to being a stone-faced killer in short order — we're talking just over a month, plus however long it takes for the presumed killer to go to trial — and unlike a number of other urban vengeance films I can name, there is no sense of triumph or audience catharsis at the open-ended climax of his journey. I'm assuming that was the point, but still...

Both during my original viewing and during when I recently watched it, the thing that most turned me off about this film was the bit where Prago blows the toddler out the window with a sawed-off shotgun. It's truly horrible and while I don't think the deaths of children should be verboten in movies — especially not in films of this nature — the way it was handled here is truly horrible to a Stygian degree. It's not as gory as I remembered it being, but the blanks that the mind fills in as opposed to what is actually depicted are absolutely horrifying and it's something I really could have done without. I remembered it as being a moment where the report of the gun is heard and immediately followed by what looked like weighty, bloody hunks of meat propelled through the window and seen from the mother's point of view in the backyard, but what's actually seen is simply a gout of stage blood and no body. Nonetheless, it remains too nasty even for me.

The rest of the film is not an action flick, despite it being described as such in several online reviews, but rather a fairly serious look at vigilantism and how it can get out of hand. It's much more low key and thoughtful than a film of this ilk is supposed to be, and maybe that's why it hasn't vanished into the ether along with many other grindhouse efforts from its era. Oh, and among the film's highlights are:
Depressing though it may be, VIGILANTE is '80's to the core and is worth a look for vengeance cinema completists. Just don't expect to feel like life is worth living after sitting through it.
Posted by Bunche (pop culture ronin) at Sunday, April 01, 2012

Forester and Williamson?! Its in the que!

Thanks for the heads up,
Brian