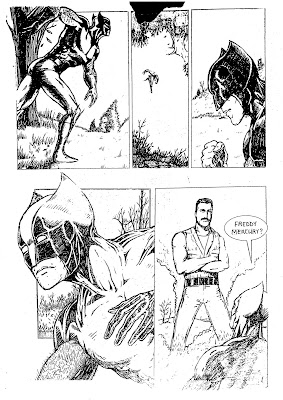 The now-infamous submission page.
Well, color me surprised...
Never in my wildest imaginings did I expect to see the "Wolverine meets Freddie Mercury" submission page that I received over a decade ago and posted here two years ago featured on the io9 website, and sure as hell didn't expect to see the page in question end up showcased on the ROLLING STONE web page, but such has come to pass and it can be seen here. If only they could get away with posting "Filthie Rich."
And in the interest of giving credit where credit is due, the page was first brought to my attention by my old friend and Bullpen brother Darren Auck, who at the time was the Bullpen's head of art corrections. As part of his duties, Darren received and perused countless submissions from aspiring artists, most of which were totally unusable crap, and he knew that I collected such anti-masterpieces in a thick binder, so when the submission in question fell into his hands he passed it on to me so I could photocopy it and add it to my collection, which I later digitized and posted here for posterity. And, boy, am I glad I did! I spoke to Darren about this sudden viral Internet presence not an hour ago and he told me he no longer had the original, it being lost to the mists of time and a ton of studio-cluttering junk that likely got thrown out. Let's hear it for being a pack-ratting, scanning geek blogger!
Posted by Bunche (pop culture ronin) at Wednesday, April 25, 2012

Filthie Rich is still my favorite. That hobgoblin sure loves knob-gobblin'!

This is riotous. Too bad there wasn't a slight song and dance number in there.