ANOTHER DAY IN THE LIFE 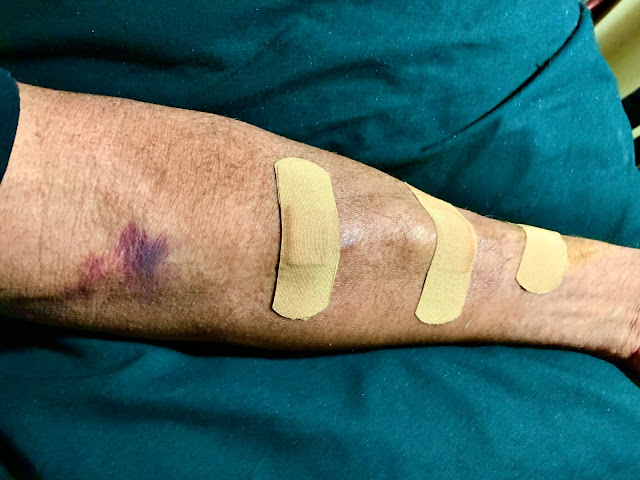 My fistula arm in the wake of Tuesday's fistula maintenance procedure in Flatlands.

One of the many ongoing agonies of late stage kidney failure and dialysis is the necessity of periodic checkups and maintenance of one's fistula, but one gets used to it.

The bandage near my wrist covers the point where the surgeon made the incision through which a wire is inserted into the length of the fistula, and when withdrawn, the wire pulls out any clotting that may be hindering the in-and-out blood flow of the dialysis process. (The other two bandages are over the entry points for the needles. What's seen here was hours after dialysis, as those wounds are tightly bound with thick cotton wadding and then tightly bound for pressure that aids in the woulds sealing.)

The fistula is a surgically-created fusion of an artery and a vein, and the area that needs periodic seeing to runs pretty much the length of one's arm. So, what happens is they make an incision and then roughly shove a wire into the arm, with the arm numbed-up and the patient under mild sedation. In the case of Tuesday's maintenance, it was a doctor I had not seen before, and the guy was quite rough with the wire. Think of a revolutionary war soldier tamping gunpowder down the barrel of his rifle and you'll get the idea.

When I got home from the procedure and the numbing agent began wearing off, a bruise became visible at the far end of where the wire was shoved, and from then on it's felt like someone hit the bruised area with a ball peen hammer. Fun, fun, fun...