REGARDING MY DAD: THE BOOK IS FINALLY CLOSED

So...
Two days ago my mother called to tell me she received a letter from Social Security alerting her to widow’s benefits. Such payment is awarded to the deceased’s first spouse, so my mom called up Social Security and asked what all of that was about. That's how she found out Oscar Anderson Bunche, her ex-husband and my dad, died on December 28th of 2021 at the age of 85.
For my part of the equation, what should be a gut punch is instead a state of apathy at his demise. There was no love lost between us and we had not had anything resembling a positive relationship since I was six (fifty years ago), so I note his passing but that's about it. In fact, my mother and I both admitted to a state of utter apathy upon receiving the word of his passing. Quoth my mother, "I was married to that man for sixteen years, yet I felt nothing when I got the news that he died."
When my mom called, she expected me to have some sort of an emotional flip-out at the news, but my calm shocked her. I explained to her that I understood her always wanting to foster a relationship between him and me, but it was never there. She finally acknowledged that she knew that there was no relationship between us and that is was all on him. If anything I felt bad for her, because I know she considers his failure as a father to me is somehow partially her fault when it absolutely is not.
The one thing that does rankle me, though, is that the obituary I found for him online completely erases any mention of his first marriage (the one to my mother), and while his survivors are listed, I am not among them. I suppose I should not be in way surprised, as the man actively worked to erase all evidence of his existence prior to the divorce from my mother (save for his acknowledgement of my older half-sister who was born to another mother some seven years before I debuted), something I discovered when I had lunch with my my younger half-sister some fifteen years ago when she tracked me down via the internet after not having seen me since she was three. She told me because she was shocked to see the photo album that I brought with me during the lunch where we met up when she was an adult. She had never seen even one photo of him from before he married her mother, so my erasure is part and parcel for the life he re-imagined himself into. In short, my dad basically erased all evidence of his life prior to his second marriage, starting as far back as 1976, but my existence and presence remained an inconvenient  anchor to a relationship that he never wanted to be in in the first place. And I was a disappointment by not being the fantasy son that he wanted, and if he could have he would have started over while completely forgetting the child he sired in a relationship he felt forced into by parental pressure. He started over with his new wife and kids and reinvented himself as a sepia Caucasian, a case of denial and self-loathing the like of which I have never seen.
My involvement with him would have ended there, had it not been for my mother's well-intentioned but utterly misguided efforts to make sure he remained in my life as my father figure, despite lack of any real interest from either myself or from Oscar. There were many awkward and uncomfortable visits with him during the years when he was re-establshing himself, years that coincided with my junior and senior high school years, a period in which I really needed a solid male parental figure, but at the time he was not in a place where he could have provided that, if indeed he ever was. From all reports, his parents never showed him much by way of love and nurture, favoring his younger brother, Leonard (now deceased), over him, so he never learned the tools with which to impart such on either my older half-sister or myself.
My parents, both born into the deep, rural American south of the pre-Civil Rights Jim Crow era,  only got married because their folks — both families being highly dysfunctional — thought it would be the answer to both of their problems. Oscar's parents wanted him to marry someone of color, noting that despite her Native American complexion, my mom was still "the darkest thing Oscar ever brought home" (according to my mother; she told me that ages ago, claiming it was said to her by dad's mother) during the late 1950's). On my mom's side of the equation, her iron-fisted southern matriarch of a mother wanted her to marry and have kids and then take over as the matriarch of the James family's twisted dynasty. My parents were together for a total of sixteen years, all of which was a misery for both parties. And I, as their only child, bore daily silent witness as their relationship worsened with each passing day and year.

My favorite story of my dad, if I can even call it that... No. It's more of an anecdote that perfectly outlined his character: According to my  mother, early in my parents' marriage, it was apparent that things were not working out, and my mom, being the old school southern gal that she is, suggested that they go back to the church and see if that would help them. (Mom was raised in a strict Episcopalian household, and her religious programming persists to this day.) Hearing this, dad reportedly responded with "You don't need church. I am your god." (Having lived with the man for the first ten years of my life, I absolutely believe he said that.) When mom told me that, I said "If I were you and he said that to me, I would have immediately bailed." Mom just looked at me with sad eyes and a weary expression and simply said "I wasn't that strong then."
There's more, a whole lot more, to Oscar's history, but now it's over and I choose to just let it go.

As for any deeper expression of feelings I may have on the matter of Oscar's passing, they may eventually come, but right now I am just numb. I came to terms with my inner demons regarding him, demons that I sought to drown with booze and drugs for far too long, and since then I have been at peace with all that went down. I survived is what matters, and if anything, his legacy to me was a carved in stone example of what NOT to be as a spouse and as an influence on children. That said, the man that his second wife and kids lived with and knew was a complete reinvention of the man that my mother and I knew, so perhaps he found some measure of happiness in a family of his own choosing.
Despite his academic and career achievements, he was a weak and damaged man and a failure as a human being, at least during his pre-rebooted existence. If anything, I no longer hold anger towards him. Only pity.
Anyway, I mark his passing simply as footnote in the pages of my life. No condolences are necessary, as he's been dead to me for close to thirty years. I leave the mourning to his acknowledged survivors and I wish them well. 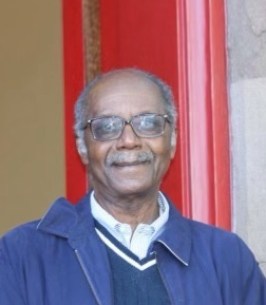 Oscar Anderson Bunche (1936-2021), originally Bunch. (He added the "e" to the surname in an effort to sound more posh, and to spark speculation that he might have been related to then-prominent politician and Nobel Prize winner Ralph Bunche.)
Posted by Bunche (pop culture ronin) at Thursday, January 20, 2022