THE GIFT OF PLASTIC, MAN 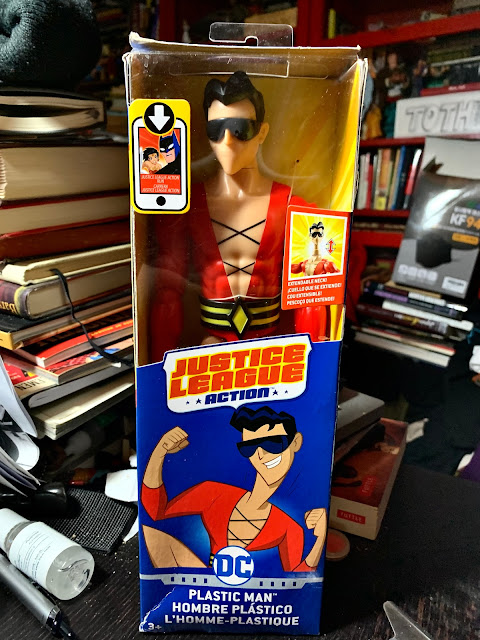 I'm gearing up for my mom's 89th birthday, which is next week, and along with some culinary goodies — four quality fillets of catfish (frozen for transport), an excellent Cajun fish breading, and the promise of a meal at the excellent Westfair Fish and Chips (provided they are open for dining and not just takeout — I happened upon this big doll of Plastic Man and had to get it for her.

My mother is a first generation superhero fan, having been born five years before the debut of Superman (the OG superhero), and when she was a kid her favorites were Wonder Woman and Plastic Man. She has a sort of shrine to Wonder Woman in her entertainment media room, but she has no representation for Plas, largely because most of the figures of him suck. I mean, let's face it, his powers are among the most visual out there, and they do not translate as a solid toy, but I figured something of this scale would be a striking addition to her collection. It has a jaunty animated look, modeled as it is after how Plas looks on the JUSTICE LEAGUE ACTION cartoon, and his neck elongates, which is better than nothing.

Anyway, the point is that now my mom will have Plastic Man. Even if she just displays him in the box, at least he will be present.