I love the writing of Garth Ennis because it appeals to the arrested adolescent sensibility within me, the aspect of my forty-something psyche that finds over-the-top ultra-violence, sleazy sexual scenarios (the day when T.C. fucked the cake in PREACHER remains a landmark), creative profanity and all-around laddishness to be a shitload of fun, so when I found out that the crazy Belfastian bastard has scribed a five-part mini-series about Barracuda, my favorite character to surface in comics during the past decade, I almost called Garth to offer him a serious BJ by way of thanks (I’ve never played the skin flute, but anything is possible when one is drunk enough). 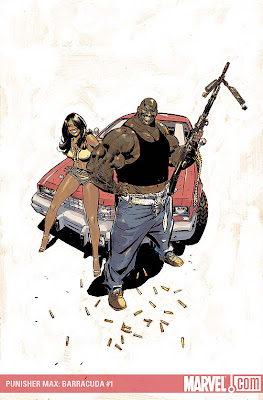 For those out of the loop, get to your local comic shop and pick up the PUNISHER volume entitled BARRACUDA; it’s about how the Punisher meets a huge black dude who’s every bit as badassed as he is, and I’ll be damned if you won’t love Barracuda despite the fact that he’s a vicious killer for hire. His charming, sunny attitude is infectious indeed, and when the Punisher not only cut off the fingers on the dude’s right hand and then dumped him into a roiling sea full of ravenous Great White sharks, I was truly saddened to see him go. I mean, think about it: today you’re the baddest, Blackest thing next to Darth muthafukkin’ Vader, and the next day you’re shark shit. How do you get outta dat?

Then the mini-series arrived, and what I assumed would be a flashback turned out to be a continuation from what would have been a terrible end. The big black motherfucker turns up very much alive — I won’t reveal how, because it’s such a perfect way out of a no-way-out situation that I laughed my ass off, recalling the MONTY PYTHON’S FLYING CIRCUS episode “The Cycling Tour,” in which the two heroes are ludicrously bailed out of certain death by firing squad (who, thanks to their horrendous marksmanship, have to resort to rushing the condemned with bayonets) when a title card appears that reads SCENE MISSING, only to turn up in an entirely different location and react with, “What an amazing escape!” — and in less time than it takes to read here he steals a classic car, thoroughly fucks up some suicidally-disrespectful Mafiosi, and is enlisted in a mission for their capo, a leader who is clearly modeled after Christopher Walken, right down to the unmistakably distinctive cadence of his dialogue. I’m just pissed that I have to wait a month until the next chapter.

And I would be remiss if I didn’t mention the excellent art by Goran Parlov, whom I had the honor of working with during my days editing OUTLAW NATION. The guy can draw his ass off, and I will kick you in the skull if you disagree.

Bottom line, THE PUNISHER PRESENTS: BARRACUDA #1 was the highlight of this week’s comics reading, and I say to the powers that be at Marvel, stop fucking around and give Barracuda his own book with the same creative team!!! You have winner here, so if it ain’t broke, DO NOT FIX IT!!! TRUST YER BUNCHE!!!
Posted by Bunche (pop culture ronin) at Monday, February 19, 2007