Since I had the time I figured I’d check out some of the latest Hollywood has to offer, quite conveniently in my humble apartment, on screener DVD’s. I propped my convertible futon up into couch position, cracked open a Bud forty, and let the first movie run, and so began my descent into cinematic Hell. 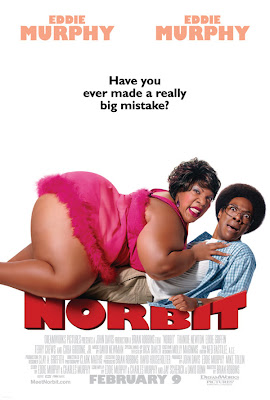 First up was Eddie Murphy’s NORBIT, an outright disaster that had the poor timing to come out right on the heels of his Oscar-nominated performance in DREAMGIRLS, and hopefully the Academy members voted before NORBIT hit the screens. The film tells the story of the sweet-but-dorky title character whose life gets off to an unlikely start when he’s left as an infant at a Chinese restaurant/orphanage (?) and raised by Mr. Wong (played by Eddie Murphy in the most cringe-worthy stereotypical yellowface role since Mickey Rooney’s Mr. Yunioshi in BREAKFAST AT TIFFANY’S). There he falls in love with another orphan, and the two “get married” in a pretend ceremony before they are separated when she’s adopted and Norbit is left behind. From that point on Norbit is hounded by Rasputia, a fat girl who bullies the entire schoolyard and ropes Norbit into being her boyfriend.

As the years pass he ends up marrying the increasingly grotesque woman (now played by Murphy in an incredibly realistic fat suit crafted by effects genius Rick Baker) and becoming a part of her brothers’ uber-thuggish shakedown and construction organization, all while his monstrous wife’s emotional and physical abuse escalates into areas that bear no resemblance to humor whatsoever. But just when Norbit’s about as pathetically, miserably downtrodden as a human can get, the love of his life returns (now played by Thandie Newton) to run the orphanage, and she’s the polar opposite of Rasputia, what with being sweet, rail-thin, not an adulteress, and light-skinned, and she rekindles their friendship. As Norbit experiences happiness for the first time since childhood, Rasputia’s evil is given a run for its money by Cuba Gooding’s polygamist, gold-digging scumbag who’s engaged to Newton’s character and intends to steal the orphanage from her once they tie the knot, and since he’s in cahoots with Rasputia’s hoodlum brothers he will transform the place into a titty-bar called Nipplopolis the second the deed is in his hands.

These plots converge with results so predictable that members of undiscovered tribes in the deepest Amazon would call the results stale, and by the time the credits mercifully roll the audience is assaulted with a non-stop barrage of fat jokes that aren’t funny in the first place — let alone the ninetieth time — a horrifying catalog of extreme ethnic stereotypes, ludicrously gaudy pimps thrown in for no apparent reason, white women who yearn to serve the aforementioned pimps at the mere suggestion of being a “ho,” and an animal cruelty gag that almost literally made me gag.

Now, I love stupid and tasteless humor quite a bit, but NORBIT is merely tasteless and aggravating, a prime example of that saddest nadir of entertainment failure: a comedy that provides no laughs and just lays there like three-day-old roadkill. And as if that weren’t bad enough, the film has a balls-out mean streak running through it that negates what it tries to convince us is humorous; abusive relationships are not funny, and it’s truly agonizing to witness the torments Norbit goes through at the hands of his manipulative, adulterous, shrill, would-be “ghetto chic,” grotesquely obese harridan of a spouse, a “comedic” creation of such supreme malevolence that she crosses the line and becomes a monster.

The simple fact of the matter is that NORBIT is a gross display of racist imagery, misogyny, and cruelty passed off as entertainment, sort of an urban Roald Dahl fairy tale without any of that author’s wit or wicked sense of humor. A very big step back for comeback kid Eddie Murphy, and highway robbery of the moviegoer’s time and hard-earned cash.

And you know NORBIT is an atrocity when it makes the unspeakably horrifying origins of a sadistic, cannibalistic serial killer pale in comparison. 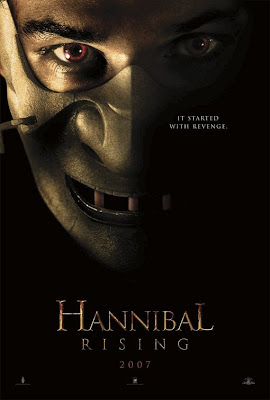 HANNIBAL RISING is the latest installment in what has become the Hannibal Lecter franchise, and is by far the most slumber inducing of the lot. Lecter instantly attained horror movie hall of fame status thanks to Anthony Hopkins’ Oscar-winning turn in THE SILENCE OF THE LAMBS — actually the second film featuring the character, 1986’s MANHUNTER being the first, with Brian Cox essaying the role — joining such beloved latter day bogeymen as Freddy Krueger, Jason Voorhees, Michael Meyers, and Pinhead in the popular consciousness, yet being far more frightening due to his status as a mere, albeit seriously twisted, human being. Driven by amoral madness, senses that verge on the animalistically acute, and a cold, reptilian intelligence, Lecter’s crawly evil touched a place within viewers so primal that it overshadowed what many would consider his most diabolical aspect, namely a taste for human flesh coupled with a gourmet’s kitchen skills. The guy was smart, soft spoken and creepy as all fuck, so it was just a matter of time until the box office take spoke and sequels began in earnest.

HANNIBAL (2001) sucked balls almost as much as its source novel, suffered from Jodie Foster’s absence (although I would never turn up my nose at Julianne “the carpet matches the drapes” Moore’s redheaded loveliness) and was met with both critical and audience apathy, then RED DRAGON (2002) retold MANHUNTER far less effectively, with a bigger budget and more upscale cast, but also didn’t set the world on fire like SILENCE had. You’d think that after two relative duds in a row Hollywood would give it a rest, but NOOOOOOOOOOO…

This time around we are presented with Lecter’s youth and the hideous events that spawned him, and I’ll be damned if anyone really cares about the end product. The story pulls off the double barreled kick in the head of not only demystifying the character, but also rendering his origin a glacially-paced snooze with understated acting so turgid you’d think it was performed by the Royal Shakespeare Zombie Repertory Company. The guy playing the young adult Hannibal has no screen presence whatsoever, to say nothing of the slightest trace of menace, and for a budding cannibal the guy is one emaciated motherfucker. Seriously, this guy looks the kind of wannabe hipster/poet type you knew in high school, all black turtlenecks and posing, just waiting for a savage beatdown from the flitty president of the drama club who hates him for being too much of a pussy. Oh, and just to spoil THE BIG REVEAL, the Lithuanian brigands who killed and ate Lecter’s little sister to stave off hunger during the closing days of WWII fed Hannibal — presumably to keep him alive in case he’s needed for the next barbecue — a broth made from his sibling, and that's what truly pushed him over the edge. And now you have been spared two hours of dullness.

Let's hope my next day off movies will be better.
Posted by Bunche (pop culture ronin) at Thursday, February 22, 2007

What made you decide to torture yourself like that on your day off?

It looks like that tagline on the Norbit poster is rather descriptive of the whole experience of seeing the film.

I can't even watch the Norbit trailer...although I enjoyed the review.