BACK IN THE DAYS: ON “NO TELL” MOTELS

In the early 1980’s there used to be a commercial that ran on local television for a motel named the Grantmoor Motor Lodge in Newington, CT — near Hartford, making it a bit over an hour north of where I grew up — and the place had all the earmarks of a so-called “no tell” motel. 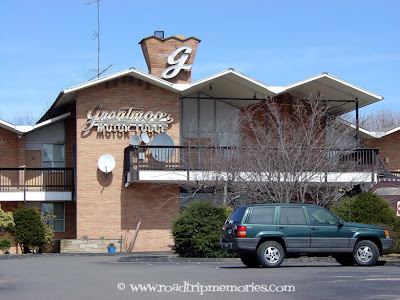 Sadly, I was too young to experience the fleshly delights of the Grantmoor, so all I know of it is what was shown in the ads, and even though I was but a callow youth I knew sleaze when I saw it. This was the kind of place where someone could get pregnant or contract an STD from merely sitting on the sheets, and I would bet good money that each room was equipped with hidden cameras so that the antics of the patrons could be taped, packaged, and sold in a kiosk in Manhattan’s Port Authority bus terminal back in the days when you might have been sold into white slavery if you dared to enter. And, amusingly enough, there was a sister establishment to the Grantmoor on Long Island, namely the Commack Motor Inn, that ran the exact same commercial on NYC television, changing only the name. 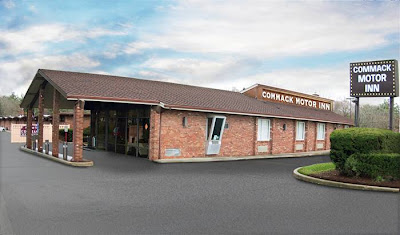 I have no idea what made me think of the Grantmoor, but I checked it out online to see if it still exists, and here’s what I found:

The Grantmoor Motor Lodge, located on the Berlin Turnpike in Newington, Connecticut, sits 154 miles due south of the Shady Lawn Motel in White River Junction, Vermont. Built in the 1940s to speed up the drive from Hartford to New Haven, the Turnpike was nicknamed “Gasoline Alley” because of the thirty-two gas stations that sprung up along its eleven-mile way. Now, however, the Turnpike serves as the main corridor between Wethersfield and Meriden; no one has called it “Gasoline Alley” in years. Though big-box stores have set up shop where gas stations once stood, the strip has managed to hold onto a few residual traces of local flavor. Between and off to the side of the newly minted national and multinational chains—Lowe’s, Krispy Kreme, Raymour and Flanigan, Burger King—lies a sundry string of distinctly regional operations, from independent motels to the odd Fifties diner.

While most of the motels here hunker meekly by the side of the road, each somehow more unexpected than the next, the Grantmoor makes its presence known far in advance with a towering steel sign that rivals even that of Wal-Mart’s. Despite its initial hubris, however, the motel keeps a prudish distance from the road, hiding behind an expansive, heavily divoted and frequently empty parking lot, which the Lodge shares with the Sphinx Temple (a Shriner meeting house) and the Golf Improvement Center Driving Range (self-explanatory). Eventually, though, the Grantmoor’s signature white modernist zigzag pokes through the horizon, a colonial “G” pinned to its top.

With its wood-vinyl walls, Indian tapestries, and a large sheet of glass that keeps the proprietors safe from their clientele, the lobby suggests a New Delhi bank circa 1973. Behind the front desk, a row of photographs displays the Grantmoor’s diverse array of accommodations so that visitors too shy or too tired to talk can pick the kind of room they want merely by pointing. (Rooms are for single guests and couples only. The rule reads: “Only two people allowed in room. No Visitor! No Party!”) The most deluxe room, depicted in a photo on the far right (the photos are arranged in a left=worst, right=best sliding scale), features a heart-shaped waterbed, a heart-shaped Jacuzzi, and a floor divided into carpeted and uncarpeted zones. A car stereo is mounted in the bed’s headboard next to a lighting control panel, which features not only a variety of basic color choices but also a variety of color gradations. (If you don’t like your pink “hot,” you may opt for “somber.”) Here, the mood is at one’s fingertips.

The options to the left of the Most Deluxe Room feature, in descending order of notability (but also silliness): round beds, four-poster beds with sash, four-poster beds without sash, with/without Jacuzzi, plus/ minus television—until one reaches the Most Far Left Room: standard double bed, bureau, no Jacuzzi, no television, scuff marks on the wall. One senses immediately the deep stench of nicotine. Even without all the bells and whistles, the Most Far Left Room retains a certain cachet: a mirrored ceiling. In fact, every room at the Grantmoor, from Most Deluxe to Most Far Left, comes with a mirrored ceiling. One may lie on a bed and examine one’s reflection for as long or briefly as one wishes: hourly, nightly, and weekly rates are available.

For those who enjoy water sports, the Grantmoor offers a half-empty pool and a hot tub filled with rocks and newspaper.

And then there were the reviews from people who stayed there:

Cannot understand why this place is still doing business!! The proprietors overcharged for facilities that they knew did not work; no heating in winter; $20.00 for one extra blanket; a non-smoking room (for which I paid extra) reeked of nicotine -not good for an asthma sufferer; bath tub was cracked, filthy and the hot-jets they advertise didn't work; 'hot' water was brown and unpleasant. The curtains hadn't been cleaned in years and needed replaced, bed linen was old and torn in places; I had to be careful when walking on the carpet due to frayed areas. When I complained to the management, they barely understood English, and just kept insisting I give them more money! What For??? The only thing I liked about the place was leaving!

Do us all a favour - Bulldoze the bloody place to the ground!

Grantmoor was a horrible hotel. I went just last weekend, in the end of October, and the heat was not working for the entire building. Of course, my boyfriend and I were not informed of this prior to paying for the room. In fact, we were not informed of this until we said something. Then to make matters far worse, when we woke up the next morning, we found an old condom wrapper in the bed, between the blanket and the sheet (obviously not ours). When we complained and said we were leaving early, they refused to give us our money back and only offered us another room. While we were arguing, at least two other groups of people had come by attempting to leave as well, due to the freezing cold in the rooms. We ending up getting about a quarter of our money back and that was all. We are in the process of fighting this still. I was disgusted and disappointed. I will never go back, and suggest people think about this before going there themselves.

I don’t know about you, but I would love to go there and catch such elegance on video!
Posted by Bunche (pop culture ronin) at Sunday, February 18, 2007

Labels: BACK IN THE DAYS

Every town had one of those motels. Ours was the Stony Point Hotel. Same crappy commercials and all.

if you reread the post, I mention that I went online and the article quoted was what I found. I did not say that I wrote it.

My mom ran this motel from 1981 to 1997. In that time the motel was clean, safe and beautiful. We had a full time maintenance crew that took care of any and all repairs. The housekeeping and maintenance staff was the same for all those years. We were a family. My first job was as desk clerk here. It's a shame that it got this bad.