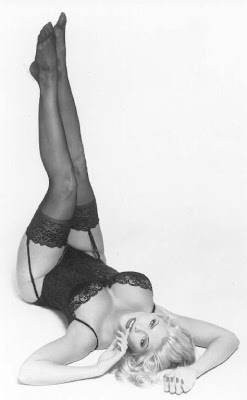 Anna Nicole Smith. Born Vickie-Lynn Hogan (and never knew her father) in Houston, Texas, high school dropout, former fried chicken purveyor and pole-dancing stripper, Playboy Playmate of the year for 1993, full-blown big-titted blonde bimbo caricature brought to life, sex machine to a grody ancient billionaire, Trim Spa spokeswoman (who looked great in a surfer body glove), devoted mother and reality television train wreck on the criminally-exploitative ANNA NICOLE SHOW (turning someone who obviously has serious problems into a laughing stock for the sake of ratings should be a prosecutable offense).

Dead of undetermined causes in a hotel room at the age of thirty-nine.

Infamous as a drugged-out tabloid floozy and publicly crucified for a myriad of perceived transgressions, Smith was the poster child for many negative female stereotypes but she pulled herself out of her crap-assed life and into fame and fortune by any means necessary to care for her son (as for how that worked out, we’ll leave that one alone), and while many regarded her as a gold digger for marrying that Crypt-Keeper-looking fossil of a tycoon (he was ninety, she was twenty-six), stop and think about that situation for a moment. The guy was a loyal, high-paying customer during her time as a dancer, so the old fart was still into hot chicks when they got married. I guarantee you that being able to get his hump on with that luscious hunk of Texan totty made his twilight days quite excellent indeed, so for that humanitarian act I say Anna Nicole deserved the money she got out of it and then some. 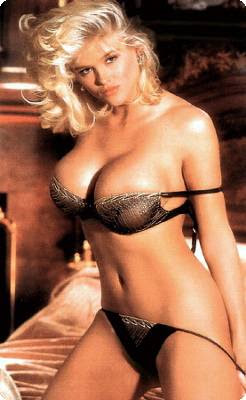 I mean, the lucky old bastard got to wake up next to this goddess with a shit-eating grin on his face. For fuck's sake, she was a goddamned saint!

So, fuck you, I liked Anna Nicole, and I hope that now she can find some of the peace that eluded her for at least the last decade.

I liked her too. What a babe.