Bouncing back from the unspeakable clusterfuck of last year’s debacle, the 2007 Comicon at Manhattan’s Jacob Javits Center was an improvement in many ways. This time around, whoever did the programming turned over the bulk of the Center’s vast space to the event and the look and feel of the place brought me back to the grandeur of conventions held there over fifteen years ago.

The three-day geekfest ran from Friday through Sunday, but my schedule allowed me only enough time to go on Friday and that suited me just fine; the convention opened at noon on Friday for pros, exhibitors and the press, with the general public allowed in at 4PM, so I would be able to make my exit before the crushing horde stormed the place.

I arrived at the Javits Center at noon and asked for directions to the pressroom so I could pick up my pass, but it seemed that none of the Center’s staff had any clue as to where the designated room was. I told each staffer I ran into the exact room number and ended up being directed to four different locations, none of which was where I needed to go, before I found someone who pointed me to the right place. Upon hitting the press room I discovered that I was not on the list and had to fill out a form with all of my information; I was there as a reporter for Publisher’s Weekly, but since I freelance for them I don’t have a business card, so I had to go through the red tape. As I scrawled down the page, my editor from PW came in to collect her own credentials, and once it was made clear to the convention check-in staff that I really was exactly who and what I identified myself as, the form was yanked from my hand before I had finished it and my press badge and lanyard were thrust into my hands. Thus armed, I made a beeline for the dealer’s room.

Unlike last year, the dealer’s area was wisely kept separate from artist’s alley and allotted enough room for vendors to set up impressive displays and allow what was certain to be a huge crowd to mill about with relative comfort. Reflecting the trends of recent years, much of the space was dominated by manga and anime companies, leaving the remaining areas to indie publishers — one of whom was an old friend and co-worker who told me that the promoters did not provide the indies with chairs and tables promised in their signed contracts, instead attempting to rent chairs for $75 and tables for an insane $700 for tables, until he set the douchebags straight — representatives from comics shops, the latest in video games (the DANCE DANCE REVOLUTION display for two participants was amazing), independent filmmakers, DVD companies, original art dealers, toy and T-shirt salesfolk, and a tiny bit of land devoted to role-playing games.

While scoping out the place for bargains and interesting tchochkes I ran into many friends and co-workers from my thirteen years in the comics biz and was shocked to see how much we’d visibly aged since I first set foot in the Marvel Bullpen seventeen (!!!) long years ago; graying hair, paunchiness, sagging tits, it was all there, and that was just me. Damn, aging is a bitch…

The number of costumed attendees was less than expected, but it was only the first day, so who knows what would turn up later? There were the requisite Star Wars cultists, including a Boba Fett whose helmet supplied the electronically altered voice, 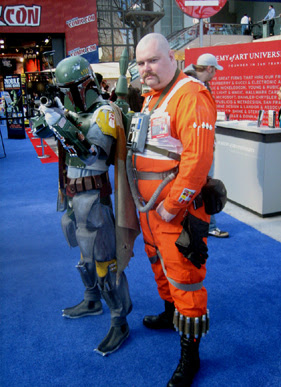 lots of barely legal girls dressed up as anime and video game characters and implant-laden horror sirens (most in the employ of companies who know that nothing gets a geek’s attention like hot chicks with big tits in skimpy outfits), Spider-Man, 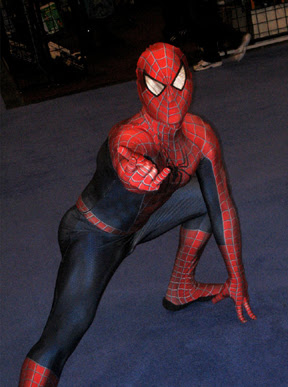 and there was even a dog in a full body Superman suit. 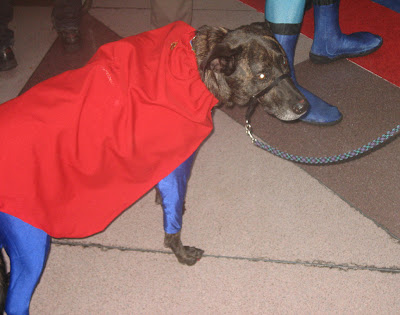 When I asked his owner if I could take the beast’s picture, I swear the dog looked and me with an expression that flat out said, “Look, I know I’m just a dog, but allow me what remains of my dignity, for fuck’s sake.”

I then went upstairs to artist’s alley and said hello to the various artists I have known and worked with over the years, first seeking out my pal of nearly thirty years Amanda Conner, and her partner in crime Jimmy Palmiotti. Both talented to an unfair degree, the twosome somehow remain humble and utterly personable, each possessing a vile sense of ribald humor that shocks many but makes me feel right at home, and I adore them both dearly.

For those not in the know, Amanda is one of the few women to break into the boy’s club that is mainstream comics — meaning both Marvel and DC Comics — along with kicking ass in the minors, and possesses a clean, concise line that communicates exactly what comics used to be, namely sheer visually appealing fun, and I herewith suggest her for the regular artist on BIRDS OF PREY; it’s DC’s best superhero book that has great scripts by the incomparable Gail Simone but has suffered from very inconsistent art, and Amanda could remedy that with her eyes closed. And talk about a natural pairing: A.C. draws hot, tough chicks like nobody’s business, and that’s what the fucking book’s about. HELL-LOOOOOOOOO!!!

After A.C. offered to look after my coat and extraneous gear, thereby allowing me to move about the show relatively unencumbered, I checked out the rest of the artists on hand and was pleased to see Frank McLaughlin, a longtime inker for both DC and Marvel who also happened to be my first judo and cartooning instructor. 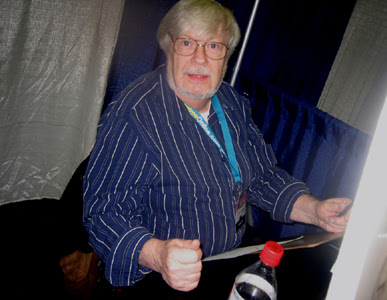 “Steven!” he yelled when he saw me. “How’s your mother?” We chatted for a bit and then I moved on, my encounter with Frank further driving home the fact that I’m now middle aged. After saying hi to a few other old friends I headed back to the dealer’s room and began to shop in earnest.

Gone are the back-issue-rich cons of yore, the in person oldies market having pretty much given way to the online cornucopia that is eBay, so the pickings in that area were a lot slimmer than I would have liked. I couldn’t find even one of the issues of 2000 AD I had on my list, but I did locate a seller who had vintage copies of my beloved EERIE and CREEPY in decent shape for a mere pittance at three bucks a pop, so I snagged ten of them including the first one I ever read back in 1974. None of the spectacular new FIST OF THE NORTH STAR toys were about, despite the new theatrical film and supplemental DVD flick, but all of the anime toy dealers sure as shit had every other item you could think of. And in my never-ending quest for absurd stuff I got my hands on a DVD of BLONDE SAVAGE (see the previous post) and the first two issues of — I shit you not — RETURN OF THE SUPER PIMPS. And last but definitely not least, I snagged a NO MA’AM shirt, an item emblazoned with the emblem of Al Bundy’s comedically anti-feminist organization from the late, lamented MARRIED…WITH CHILDREN. 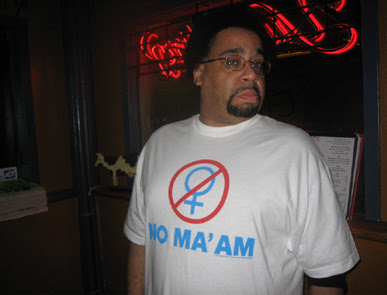 And I wish I could have afforded one of these excellent collector's dolls, the average price of which was around $90. 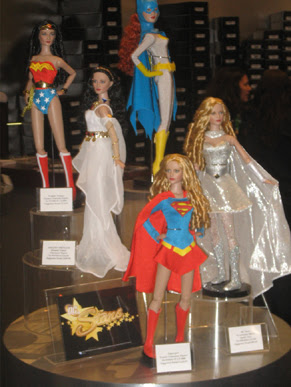 I'd have gone with Supergirl. I may be a Wonder Woman groupie, but she is definitely NOT "heroin chic."

But then it was down to business, so I hauled ass to a panel on how the blogger community has changed, and continued to change, the comics landscape, both in terms of taste making and dissemination of info. I was covering it for Publisher’s Weekly and it was moderated by the redoubtable Heidi MacDonald, so it was guaranteed to be lively and informative. It was every bit as fun as I expected it to be, and I would have happily sat through another hour of Heidi and the panelists exchanging ideas and opinions, but it just wasn’t to be; my job at the barbecue joint beckoned and the general admission crowd threatened to storm the gates, so I made one last meet-and-greet round before leaving and encountered a group of fans who had just walked in, decked out in excellent Superman, Blue Beetle and Power Girl costumes, and when I caught sight of the blonde in the Power Girl getup I had to drag her up to meet Amanda, who had drawn the character not long ago for a mini-series. 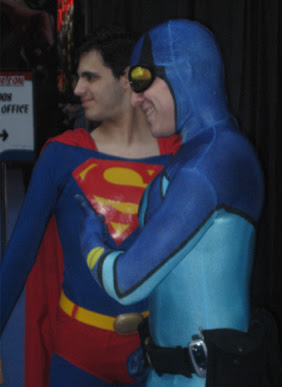 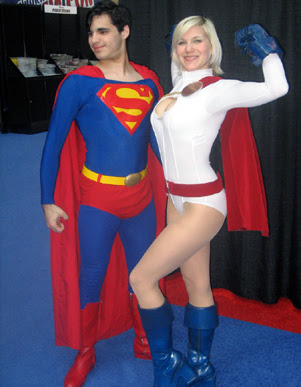 Oh, and here's an example of A.C.'s work on Power Girl, and note yours truly's cameo in panel four just below our heroine's glove: 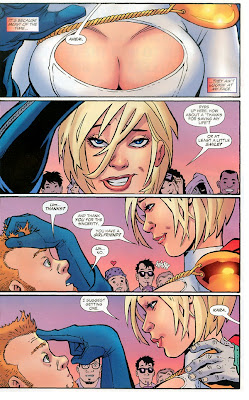 Turns out that Power Girl, the Blue Beetle and Superman were part of Blinky Productions, a group of fans that make no-budget web movies mostly based on DC Comics characters, and their work is a lot of fun. Their films can be found online at www.blinky-productions.com and the one that made me laugh out loud was a short entitled “I’m Power Girl, Dammit!” so start with that one. Anyway, artist and superhero soon met, and it was a fangirl love fest. 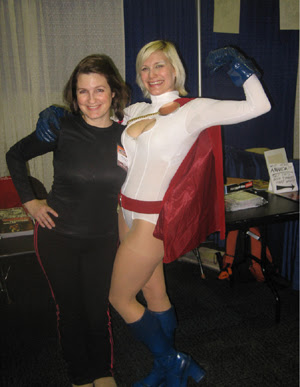 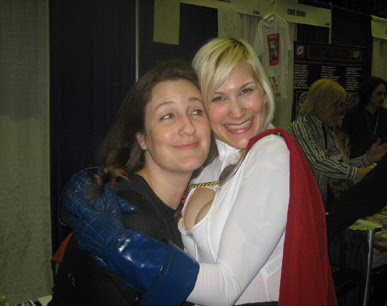 Having done my good deed for the day I headed toward the exit and beheld the waiting public, champing at the bit and reminiscent of a crowd of pitchfork and torch-wielding Bavarians about to run roughshod over Baron Frankenstein’s castle. 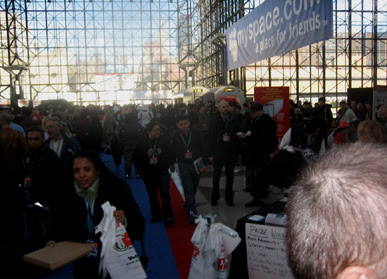 So with the scent of geekish blood in the air I knew the time was ripe to depart. And so I stepped outside into the harsh winter winds, past the enormous line of ticket holders and hightailed my ass to the barbecue joint. 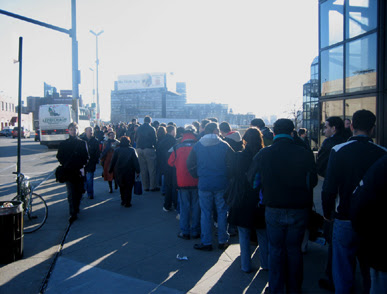 I'm just curious to see how the New York experience stacks up next to the upcoming San Diego shindig.
Posted by Bunche (pop culture ronin) at Sunday, February 25, 2007

The only reason it wasn't a debacle for you is that you got in before the general public and left before they came. Those who were in the line on Saturday that stretched all the way up to 41st might have a different idea. I wasn't there because of last year's cluster fuck and they still haven't proved to me that they can throw a proper event and handle all those people.