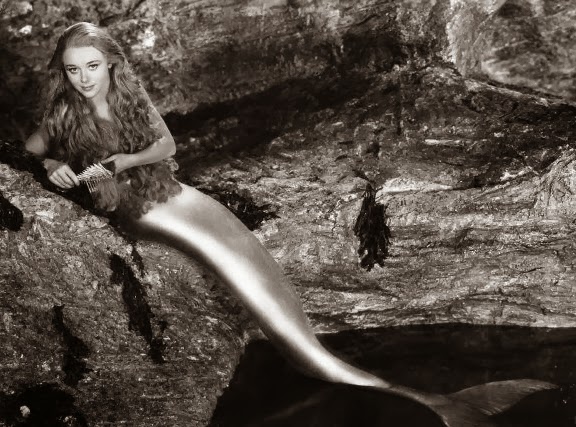 The one and only Glynis Johns as Miranda, a lonely mermaid who's out to catch herself a man.

Ever since I was a little boy I have loved and been fascinated by the lore of the mermaid, an interest likely sparked by the adorable Neptina, the tastefully topless half-fish girlfriend of early anime hero Marine Boy. I was one of the rare little boys who never found girls to be "icky," so I was fascinated by the female from Day One, plus I had a deep interest in aquatic lifeforms that led my earliest job aspirations to lean toward marine biology, so the concept of a magical creature that combined my two loves into one was bound to appeal. From the early days of watching Marine Boy and Neptina "fighting evil 'neath the sea," I moved on to reading world mythology and absorbing the many cultural variations on the mermaid, and as I got older I sought out any movies that had to do with them, nearly all of which revolved around mermaids falling in love with men from the surface world. The list of the genuinely good films in this niche category is rather small and until now I held the Daryl Hannah vehicle SPLASH! (1983) as the exemplar of the form, but now that I've seen Britain's 1948 cult classic MIRANDA (based on a stage play by Peter Blackmore), Madison's reign is over and her Cornish predecessor has taken her place in my heart and mind.

Dr. Paul Martin (Griffith Jones) fails to entice his wife, Clare (Googie Withers), into joining him for a fishing trip to Cornwall, so he leaves by himself for a bachelor's holiday. While out angling in a boat, Paul's line is snared by what he presumes to be a very large fish and he is pulled overboard, where he is promptly seized and spirited away to the underwater cave of Miranda Trewella (Glynis Johns), a lonely mermaid who's looking for a man — she'd previously caught other men but threw them back because they were too short — and instantly takes a liking to the married doctor. She makes it very clear that she intends to keep the doctor forever and he is absolutely not immune to her considerable charms while stuck in her hideout (despite his love of his wife, which he immediately tells Miranda about), so, understanding Paul's fidelity (which is fighting a losing battle against her otherworldly allure), Miranda agrees to set him free, provided he takes her back to London with him for a three-week stay. She wants to see and experience all of the things she's read about in books and magazines found mostly on ships, and she would be willing to pretend to be an invalid during her stay, covering her fish tail with long dresses and blankets while riding around in a wheelchair of being carried. Paul agrees to her request and brings the beautiful creature to the London flat that he shares with his wife and their live-in servants, butler/chauffeur Charles (David Tomlinson) and maid Betty (Yvonne Owen), with Miranda playing the role of a patient who needs Paul's care over a specifically-stated period of three weeks.

During the course of her stay, every male that she meets is completely enthralled with Miranda and not one of them stands a chance against her spell (though Paul puts up the most resistance). She bewitches Charles — who's engaged to Betty — and Nigel (John McCallum), an artist who's betrothed to Clare's best friend, snobbish hat designer Isobel (Sonia Holm), and enters into affairs with both, which of course results in all sorts of romantic mishegoss that postwar British society found scandalous and wholly inappropriate. Yet as all of this extracurricular spit-swapping occurs with the two mesmerized young men — and, to a certain extent, Paul as well — Miranda remains as sweet as honey and it's impossible to hate her for what appears to be simple (albeit powerful) sex appeal, and not even the women whose men she's stealing really hold it against her (their ire is instead directed at their helpless paramours). Especially not Clare, who eventually twigs to Miranda's secret, realizes there's some form of magic involved in all of the seduction going on, and settles back with an amused eye to watch what she knows will be an inevitable emotional train wreck (or as much of an emotional train wreck as the British stiff upper lip of 1948 would allow). It all amounts to a (mostly) one-set sex farce that leads to a rather surprising ending, especially for a film of its vintage and country of origin.

MIRANDA is a delight from start to finish and it wastes absolutely no time in getting the ball rolling, with Miranda coming into the narrative about two minutes after the opening credits. Highlights include:
One of the things that most fascinates me about this film is that when looked at from the point of view of a rather jaded audience member some 65 years after its release, it's fun to ponder just how risque this movie must have been when it hit the U.K.'s screens during its original release. For one thing, you get a mermaid who's topless when she's seen in the water (though her hair is always strategically placed), and piled on top of that there are several references to fish (and their smell) and wetness that bear intentionally vulgar connotations, and Miranda's sweet-faced, very matter-of-fact sexual aggressiveness, which brings me to the film's ending.

WARNING!!! HERE THERE BE SPOILERS!!!

Far from being merely the male sex fantasy adventures of a beautiful horny mermaid on the loose, Miranda's sexual campaign is revealed near the end of the film to be her acting not only on her personal loneliness, but also taking action to ensure the survival of her species. She earlier states that her mother had an affair with a human man, and she also mentions that mermen do exist but their unattractive looks make them unappealing to her — and presumably other females of her species — so she's opted to mate outside of the more obvious choice, and her dalliances with the three men under her thrall are an effort to widen the genetic options. It's never explicitly stated as such, but that's exactly what's going on. And while the goal of conceiving a child out of wedlock via three different men was probably scandalous enough for its era, an aspect that absolutely would never have flown in an American film, it's the film's very last shot that really raises eyebrows. When Miranda escapes back to the sea after Clare subtly calls her out for being a mermaid — and there is no malice about that; Clare is fascinated, but she wants to make the discovery public, which Miranda (and Paul) is not at all thrilled about — we see Miranda swim away, after which there is a flash-forward that shows a very happy Miranda on the shores of Majorca with a mer-baby on her lap. So in a film made by one of the most propriety-obsessed European societies during the postwar/pre-Profumo era, we get a feel-good story about a hot chick who gets knocked up by one of three possible babydaddies and we're happy to see the unashamed result. 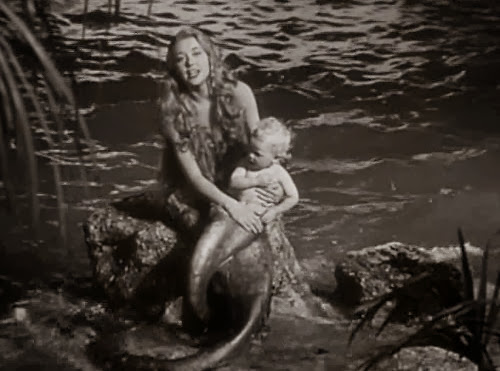 How in hell did they get away with that in a 1948 British comedy, and did it ever get an American release? (I'm guessing that it was okay by virtue of Miranda not being a human woman, but even so it's still a bit of a shocker for its time.)

The movie is dominated by the performance of Glynis Johns as Miranda, and I defy you to find any straight guy who wouldn't willingly end up a slave to the character. She's beautiful, dryly funny, has eyes that draw one in like quicksand, has charm to spare, and she's horny as hell in a classy British way. And while Miranda is a natural-born seducer — which may be magically assisted, though it's never explicitly spelled out — and knows full well that's she's messing with men who are all involved in very committed relationships, she doesn't have a malicious bone in her body, so her man-stealing ways are impossible to hate, especially once we get that she's doing what she's doing by way of acting on a biological imperative. In short, she's an ideal fantasy creation who carries equal irresistible appeal for both adults and kids. This movie can be run for kids and not be considered salacious because when viewed through innocent eyes, Miranda's romantic entanglements can be seen as simply kissing and such, the kind of thing that mermaids get up to in even G-rated kiddie flicks, and the scene fades out during the three instances when it's obvious to adult audience members that the Beast with Two Backs is about to be made. (Don't ask me exactly what the logistics of achieving successful intercourse between a human male and a mermaid may be in this specific instance. Unlike Madison in SPLASH!, Miranda does not have the ability to become bipedal below the waist, so I'd say that magic is a definite factor here. That, or a process similar to the fishy mating process involving the female's eggs being fertilized by the male's milt, which when translated to this sort of scenario would amount to bukkake, which is something best not thought about in this movie's charming context.)

MIRANDA proved popular enough to generate a Technicolor sequel, MAD ABOUT MEN (1954), which brought back Glynis Johns and Margaret Rutherford, but it appears to be unavailable on DVD in an official release, either domestically or in a foreign edition. That makes me quite sad because I loved MIRANDA and I've read several reviews that cite MAD ABOUT MEN as being superior to the original, so I'm anxious to see it. Anyway, take my word for it and check out MIRANDA for yourself. It's a rare and unique treasure. I would love to see it rediscovered because it really is a classic deserving of wider recognition on these shores. (Then again, the one possible negative byproduct of MIRANDA getting rediscovered is that some Hollywood douchebag will greenlight an unnecessary remake, replete with modern day raunchy humor and frat gags, so maybe it's better off staying in relative obscurity.) 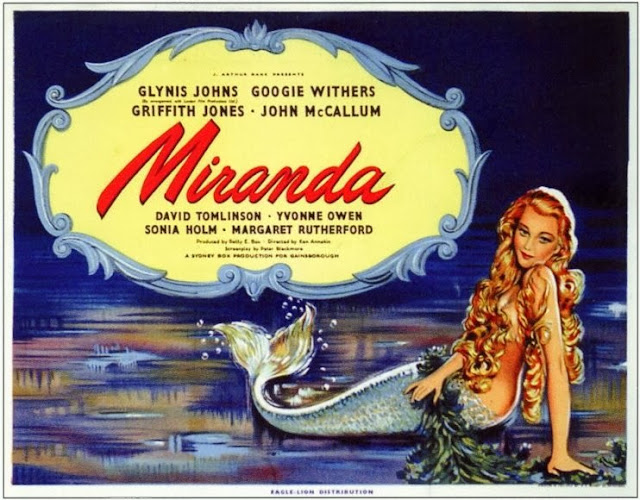 MAD ABOUT MEN is on Netflix and Amazon instant streaming if you feel the need.