Around a year ago the apartment across the hall from me once again turned over and a new resident moved in, this time a nice and clean-cut young man named Preston. When he moved in I introduced myself and filled him in on what he needed to know when living in our sketchy building — how to deal with our utter turd of a landlord, ways to handle the ultra-ghetto thugs who live in the building next door and take over the stoops and street on a daily basis with their loud and obnoxious friends, et cetera — and thus was established a good neighbor relationship. He's a really nice guy and a pleasure to have as a fellow resident.

Anyway, tonight he returned from being away for Thanksgiving and he handed me this, an autographed photo of his dad. A while back he mentioned that his dad was an actor, and it turns out his pop is none other than Ed Neal, the creepy hitchhiker from my favorite horror movie, namely THE TEXAS CHAIN SAW MASSACRE (1974). 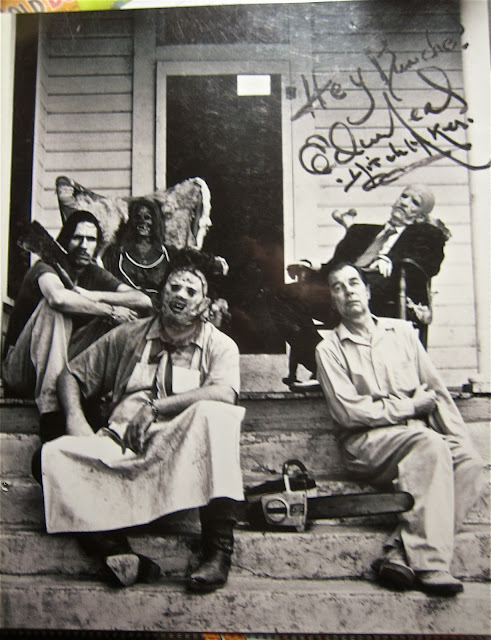 Needless to say. I'm quite happy and I immediately put the photo into a place of honor in my big leather binder of autographed pics.
Posted by Bunche (pop culture ronin) at Sunday, December 01, 2013

Mr. Neal has quite the diverse body of work. Heck, he even provided the English voice for Berge Katse in the dubbed version of Kagaku Ninja tai Gatchaman! Nice to see karma treating you right for a change Sir Bunche.

I feel for you man. I live in a redneck town. The only nuisance is hoards of birds who find something interesting about the tree in my yard.