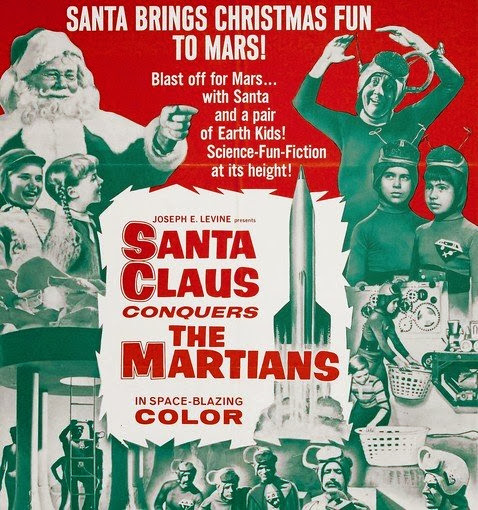 Last night I went to the Rifftrax live screening of the classic seasonal bad movie SANTA CLAUS CONQUERS THE MARTIANS (1964) with three friends, and we had a blast.

For those not in the know, SANTA CLAUS CONQUERS THE MARTIANS is a cheapjack kiddie movie that played annually for ages on the now defunct kiddie movie matinee circuit, and it was in that context that I saw it several times during my childhood. Even as a wee moppet I knew it was a piece of shit, but I saw it numerous times during those days because it was always part of an all-day movie show where parents could drop off the little ones for three full features and a number of cartoons  and short subjects, giving mom and dad time in which to sleep, fuck, get wasted, have marriage-ending fights without the kids around, or a combination of some or all of the aforementioned activities. As a kid I found it an insult to my intelligence but as I got older and my fascination with bad movies blossomed, it took on a luster that few of the bad kiddie movies I endured could match. Its narrative of a party of Martians kidnapping Santa Claus (and an incidental brother/sister team of kids) in order to bring joy to the listless children of their world is ultra-juvenile, cheaply-made and very cheap-looking, boasts no special effects to speak of — which is a real problem for a movie involving technologically-advanced  space aliens and inter-planetary travel — contains one of the most irritating "comic relief" characters in the entire history of world cinema,  possesses the screen debut of future sleaze-film star Pia Zadora, has robot and polar bear costumes that would not have passed muster in an Ed Wood flick, and features an incredibly annoying theme song that sticks in one's head like napalm while being so terrible that it comes back around to actually become endearing. In short, it's a masterpiece of crap.

The film rests on its laurels among the pantheon of classic bad movies, so it was perhaps inevitable that the crew at MYSTERY SCIENCE THEATER 3000 would find it perfect fodder for their weekly sarcastic evisceration of terrible cinema. Their version of it is now rightly hailed as one of the all-time greats from the series' ten-season run, so when the guys from Rifftrax — all of whom are alumni of MYSTERY SCIENCE THEATER 3000 and continuing that show's tradition for the 2000's — announced that they'd be doing a live theatrical simulcast of their take on SANTA CLAUS CONQUERS THE MARTIANS, I swore I would be there with bells on and I would drag as many of my friends as possible along with me. Two of the three friends who attended had never seen the movie before (much less with it being snarkily riffed upon by Mike Nelson, Kevin Murphy, and Bill Corbett), so they were unprepared for what they got.

Though I enjoy what the guys of Rifftrax do, not all of their efforts result in gems and their treatment of SANTA CLAUS CONQUERS THE MARTIANS, while certainly funny, simply could not hold a candle to the MYSTERY SCIENCE THEATER 3000 version. That was a bit of a disappointment but it was fun nonetheless, largely thanks to an unexpected bonus. 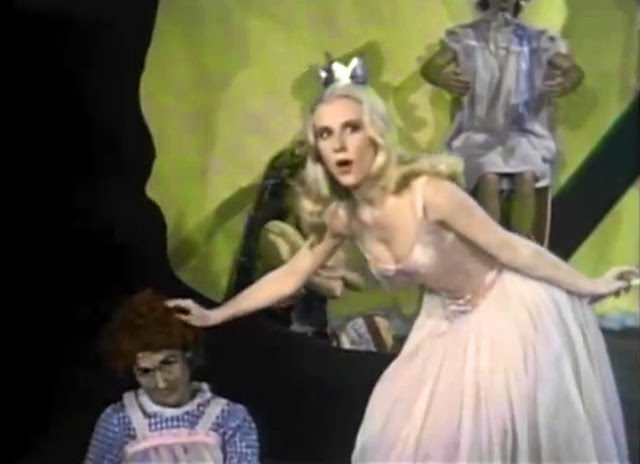 The screening was preceded by the short SANTA AND THE FAIRY SNOW QUEEN (1951), a spectacularly warped kiddie time-waster that felt like it was made in the ERASERHEAD universe. Think "Five Characters in Search of an Exit" if it had been viewed through the effects of a potent cocktail of well tequila, muscle relaxers, and Nyquil. The shit was funny as hell and worth the price of admission. MST3K fans will enjoy it because it is extremely reminiscent of aspects from the legendary MR. B NATURAL. (Those who've seen that one will immediately get what kind of psycho vibe I'm talking about. In tonight's short there's a character named Snoopy who's a magical brownie played by a woman, which brings up all of the confusing androgyny that made MR. B NATURAL an instant classic.)

Some of the live Rifftrax shows have come out on DVD — BIRDEMIC: SHOCK AND TERROR and MANOS:  THE HANDS OF FATE being the must-sees — and I'd be willing to bet that we'll be seeing this one available for at-home enjoyment soon enough. I recommend it, but mostly for SANTA AND THE FAIRY SNOW QUEEN. The MST3K version of  SANTA CLAUS CONQUERS THE MARTIANS is currently available in a two-movie DVD edition that pairs it with MITCHELL, a film considered by many fans to be the series' single funniest entry, so recommend picking that up in the meantime.
Posted by Bunche (pop culture ronin) at Friday, December 06, 2013