One of the latest additions to my endlessly-growing toy collection is this incredible skeleton warrior from the Ray Harryhausen classic JASON AND THE ARGONAUTS (1963), which happens to be one of my all-time favorites movies and my nominee for the title of "Best Mythology Movie Ever Made." The film retells the classical story and lets master stop-motion animator Harryhausen loose to create wonders as only he could, and the sequence involving Jason and some of his men fighting a pack of armed skeletons has rightly gone down in film history as one of the greatest moments in the cinema of the fantastic. Seriously, check this out:

Totally kickass, even in today's arena of CGI. I saw that film projected at Lincoln Center a few years back and the place went absolutely berserk when that scene came on, which was only made better by us rabid film junkies being able to directly show our love for the sequence to its creator, who was seated in the audience. It's been a favorite of mine since childhood, so when I heard that Japan's exceptional Revoltech toy company was releasing a super-articulated replica of one of the skeleton warriors, I did not hesitate to pre-order one. I received it yesterday and I spent a couple of hours checking out its considerable excellence. 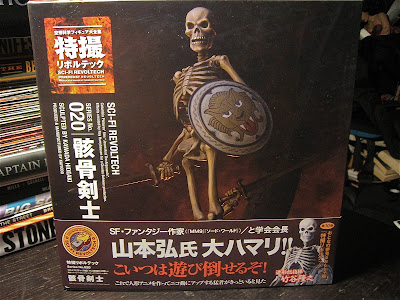 The box for Revoltech's skeleton warrior from the Ray Harryhausen classic JASON AND THE ARGONAUTS. 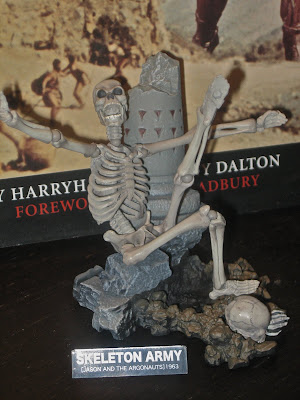 When I took it out of the box I was so amazed by how articulated it was, I could not resist posing it in Broadway-style flamboyant positions. 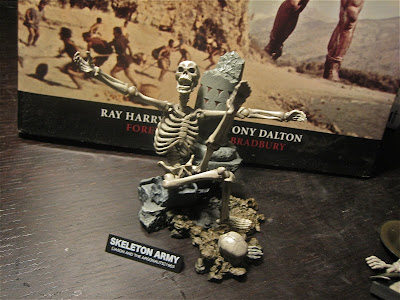 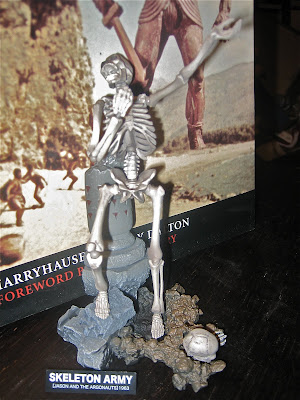 The skeleton sings "The Impossible Dream." 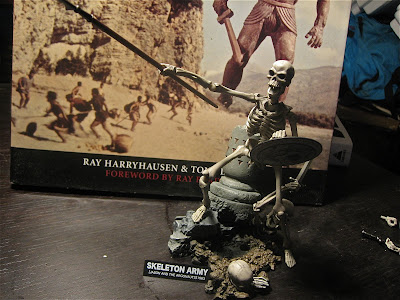 The skeleton comes with a sword, a spear, two different shields — one emblazoned with an octopus and the other with a lion's head — and his base features two more skeletons clawing their way out of the ground to join him, one of which is armed with a sword and features an articulated neck, mandible, and arm. 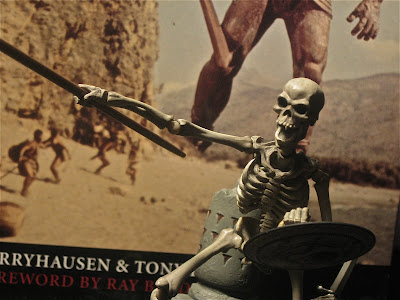 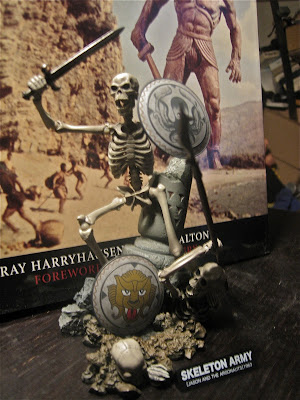 Bottom line: this is one of the finest toys I've ever had the pleasure to snag, and I wish I had the disposable cash to get six more (so I could have a whole set of the bloodthirsty, unholy bastards).
Posted by Bunche (pop culture ronin) at Friday, January 14, 2011

I'm happy to see that you're better (two posts in one day lead me to believe that you are, anyway).

Steve Bunche: Choreographer of the Dead

The reader can almost hear the skeleton singing "Impossible Dream", but what! No Ethel Merman?

I'll probably get one of these. If someone wanted to make a Harryhausen Shiva (my personal favorite), I would be all over that in an INSTANT.