HERE'S TO 2011 BEING BETTER THAN ITS PREDECESSOR 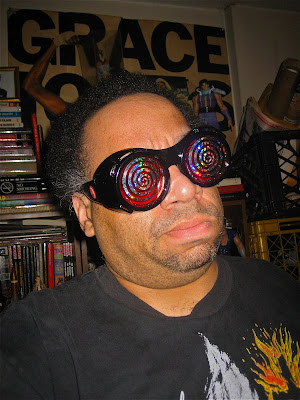 Yer Bunche, using his dimension-spanning hypno/x-ray goggles to try and peer into a less bleak future. Thus far, the reception is kinda dodgy.

With dead birds plummeting from the sky and fish floating tits up in alarming numbers, 2011 has gotten off to an ominous start, and I find myself in a sort of limbo.

As stated previously over the past couple of months, Yer Bunche has been rather out of sorts. Fuck "out of sorts," the simple truth is that I have been in a state of pretty deep depression and most of my attempts at shaking my beige ass out of it have met with only limited success. As the new year approached and my state of unemployment showed no signs of change despite being on the hunt for work since March, my spirits flagged and my soul felt crushed and helpless. Those who know me in the world beyond the Internet will be the first to tell you I'm a very emotional person, so when I'm in the midst of hard times I allow myself to be miserable rather than hold all that shit in and give myself an ulcer (or worse). I've been one morose sad sack of a Bunche for too long and, thanks to some seasonal socializing — particularly a New Year's Eve celebration where I put a major dent in a bottle of Jose Quervo, which led to some late night/early morning catharsis and an accompanying hangover — I'm slowly coming back from the semi-dead.

While sussing out the strategy of my crawling from the spiritual wreckage, I've had time to think about just what the hell I'm going to do in 2011 in order to kick my world back into gear, and here's some of what I've come up with:
And most importantly as far as you are concerned, dear readers, get back to posting regular entries on this here blog. I hope to return to either daily posts or posts every other day, but whatever the case, I need to get back on track to maintain my (tenuous) sanity and writing chops, so please keep coming back and kindly making time to read my blatherings. Your participation in all of this over the years has meant a great deal to me, and even though I earn not one fucking penny from doing all of this, your continued interest and support is worth more to me than a truckload of cash. (NOTE: that's not hyperbole: I've had several opportunities to run ads on this blog, but I refuse to do so because I hate that kind of shit on the blogs I read, so why make mine just as annoying for my regular readers?)

Anyway, here's to 2011 being better than the last year. Please wish me good luck, and I will happily do likewise for you.

Oh, and check back here no later than a day or two from now. I have the assessment of my current Top 25 Favorite Films list on the boiler, complete with liner notes, so that's as good a place as any with which to start the new year.

I've missed your more regular schedule of posting, but totally understand how lack of job for so long (even absent any other stresses in life) can screw with a person's head...and I'm pleased that you've been able to keep up with things here as much as you have.

It was wise of you not to toss "get a job" into the resolution list since there's not much you can do to move a sluggish economy...but I'll resolve to see if I have any pull with the Big Guy to send some karmic good fortune your way.

(Oh, and I'm glad your eyewear has some ability to see into the future. All my pair ever did was allow me see through women's blouses and bras)

I really missed your postings.

Hang in there Steve, Spring's coming! :)

Glad you're back on Gram'pa. Been fienden' for some news from the homefront!

Here's a big thank you for making my 2010 a little brighter.

I went through a bunche of your old Christmas song posts, made a CD and gave a copy to my brother for Christmas and it made me feel all warm inside.

Good fortune smiles on the wise.

Big manly hugs, and power-wishes for an amazing new year!

I'm so glad you've elected to emerge from the "sad sack of a Bunche" cocoon, and am there all the way in support... Augean Stables and all.

dude. i say run ads. make a little something. we all understand and many sites have them. if it helps you i say do it. none of us will stop reading if you run ads.