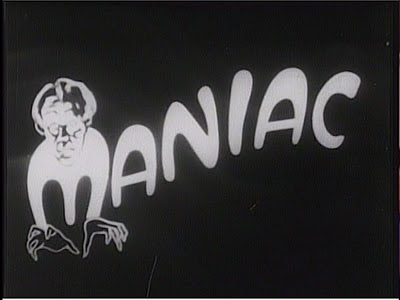 Ed Wood's PLAN 9 FROM OUTER SPACE (1959) is often cited as "the worst film ever made," but I take issue with that assessment because, unlike innumerable very bad movies, it is very, very entertaining from start to finish and it is also (mostly) coherent in its storytelling. A more legitimate contender in this department (though also entertaining to an incredible degree) is 1934's MANIAC, a fifty-minute supposedly serious examination of assorted mental disorders, all embodied within the person of one very, very fucked-up guy and explained in periodic "educational" placards that bring the plot (such as it is) to a grinding halt. 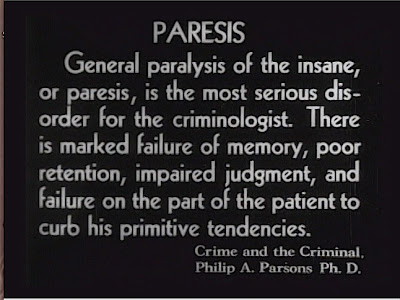 A feeble attempt at granting this film some modicum of socially-relevant respectability.

Or rather that's how the filmmakers got away with its considerable excesses back in the days; it's actually a primitive exploitation film of the highest/lowest order and should be seen by all students of the genre, as well as by those fueled by cheap booze and low-grade ditch weed. 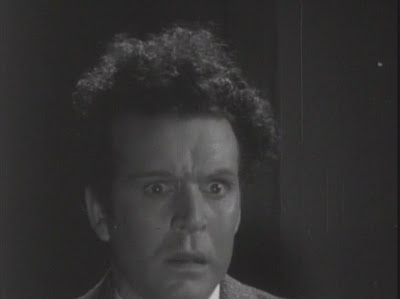 Our protagonist: Don Maxwell (William Woods).
The narrative opens in the lab of Dr. Meirschultz (Horace B. Carpenter), a bushy-haired, German-accented and quite obviously mad scientist whose twisted experiments focus on various aspects of re-animating the dead. Aided by former Vaudeville actor/impressionist and inexplicably-wanted felon (?) Don Maxwell (William Woods), the doctor sneaks into a morgue and successfully re-animates the corpse of a recently dead woman with a serum he discovered, so with that success the doctor declares he needs a corpse with a shattered heart with which to continue his work, this time transplanting a re-animated and undamaged beating heart into said corpse. 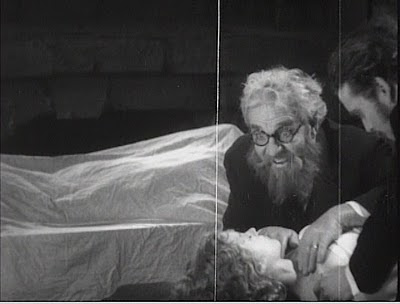 What a way to get a Saturday night date: re-animating recently-dead hot chicks.

But Maxwell's corpse-pilfering errand is derailed when he's interrupted and frightened by two cats having a fight (why the cats are hanging around in a dungeonlike basement morgue is anyone's guess), so he returns to the lab empty-handed and crazed-looking, right after being once more frightened off, this time by a fight between a dog and a cat in the street. (??? Are there neighborhoods where animal fights just spontaneously break out all the time?) The mad scientist blows a gasket and hands Maxwell a pistol, with which he is told to shoot himself in the heart so the doctor can still have a corpse to work with. Instead, Maxwell does the only sensible thing and kills the doctor, at which point he goes full-tilt, balls-out-hallucinating insane, without preamble and for no apparent reason. 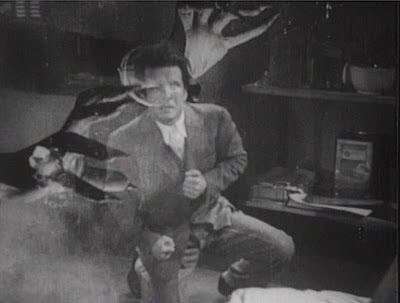 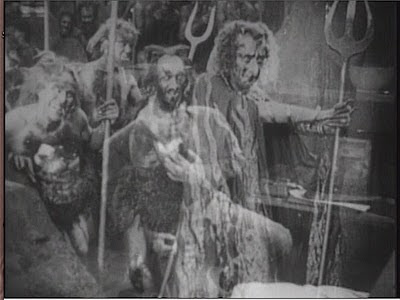 Ah, sweet hallucinations...Wheeeeee!!!
With the mad scientist now tits-up dead on the laboratory floor, Maxwell puts his impersonation skills to good use and literally becomes the crazy old Kraut, even taking over the quack's practice. (I guess it stands to reason that the scientist might have had a practice outside of his interest in re-animation. I guess...) 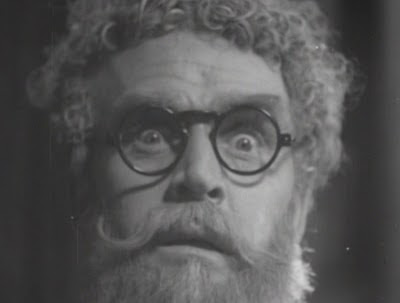 Maxwell becomes Dr. Meirschultz. Would you trust this guy as your personal physician?

From there the film veers wildly into sheer incoherence and lunacy that rivals that of its protagonist, all of which is driven by ludicrous dialogue, directing choices that amount to visual non sequiturs, and, above all, some of the most entertaining terrible acting in cinema history. Case in point: this classic sequence in which a patient goes insane after Maxwell/Meirschultz accidentally injects him with the re-animation serum.

The crazed dude then abducts the re-animated woman and steals her away into the countryside, at which point her gown opens for no reason other than to expose her '30's tits. 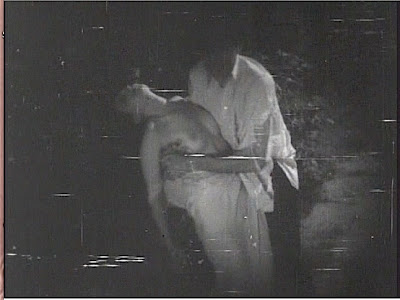 GASP! Tits...of the '30's!!!
Sure, it's obviously an early exploitation film, but the nudity element clearly marks this as a pre-Hays Code grindhouse product, and more power to it for going that extra sleazy mile. 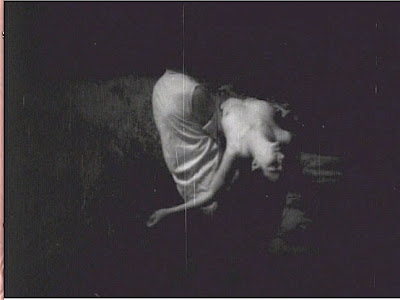 More tits of yore. Think about it for a moment: this could be your grandma.
The sex-crazed injectee then goes on to strangle his topless victim, after which that's the last we hear of him. In other words, the sequence existed for no reason other than to provide an eyeful of nekkid titties. A noble artistic intention, to be sure, but I would have liked to have some resolution to this particular plot thread. 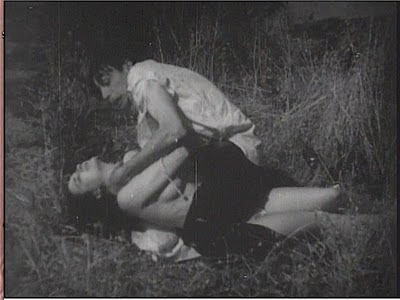 Then there's a totally from out of nowhere bit where Maxwell, who by this point has fully become Meirschultz, wrestles one of his neighbor's cats and pops out one of its eyeballs. 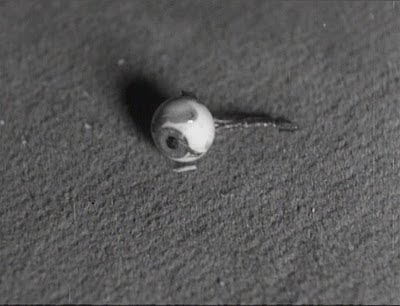 Delighted with the results of his efforts, Maxwell scoops the feline peeper from the floor 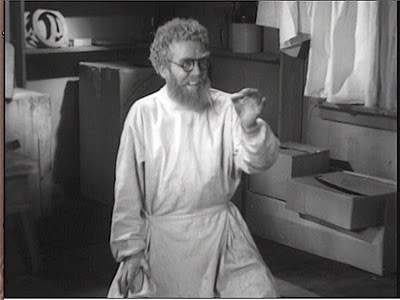 and promptly eats. it. 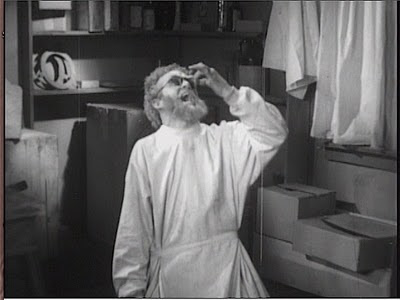 Exactly why is anyone's guess, because it is in no way made clear by the script. There's more — a lot more — but I think you get the point that this film is off-the-rails crazy and totally worth seeing. Plus, at a mere fifty minutes in length, it's mercifully short.

Helmed by Dwain Esper — director of such socially important works as MARIHUANA, THE WEED WITH ROOTS IN HELL! (1936), SEX MADNESS (1938) and THE STRANGE LOVE LIFE OF ADOLPH HITLER (1948) — MANIAC (originally SEX MANIAC, but presumably changed to its present title so as not to mislead its sleaze-hungry audience into thinking the film was about the mauler of topless chicks) is a fascinating and hilarious time capsule that conclusively proves exploitation and lurid sleaze are nothing new in the movies, and even by today's standards it's still quite shocking. I can't imagine how I would have reacted to it if I'd had the opportunity to see it during my early youth and the years in which I absorbed tons of old movies of a far more wholesome pedigree, but I bet I would have loved it. 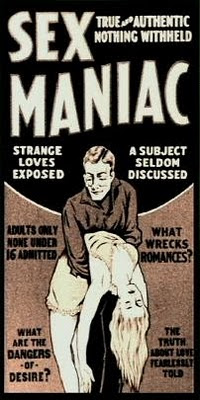