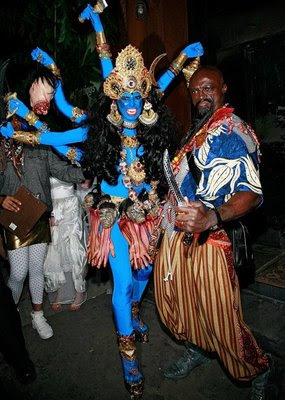 Heidi Klum as Kali and Seal as Sinbad. No, seriously!
Hey, Temmere-

While they are admittedly miracle-workers when it comes to making gorgeous and accurate small scale versions of familiar movie monsters, I doubt Revoltech will attempt to tackle Harryhausen's Kali from THE GOLDEN VOYAGE OF SINBAD. 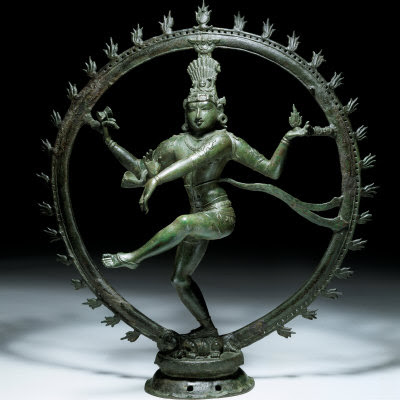 Classical depiction of Shiva in statue form.
And you are quite correct in thinking it was Shiva, which shows more thought than the filmmakers put into getting the Hindu gods straight; the Harryhausen version is clearly modeled after the classic "dancing Shiva" statue posture, but the figure and features of the Sinbad version are clearly female, plus it's identifiable as Kali by the belt of skulls that adorn her waist (usually seen in classical depictions as severed human heads, accessorized with a garland of severed arms, but presumably toned down here for the purposes of a kid's movie). Harryhausen's Kali, shortly before she starts to dance.
That said, while Revoltech may or may not get around to making Kali, there have been a couple of replicas of her that got released in the '90's and they're both quite good. First up is the smaller of the two, and eight-inch version that's part of a series of other notable Harryhausen characters. 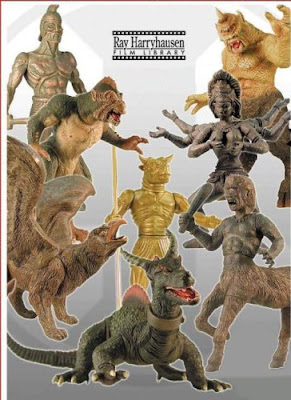 The whole set can be had via Amazon for $149. I've seen these up close and they're okay, but they're a bit too small for my liking. The cyclops and dragon from THE 7th VOYAGE OF SINBAD are both available at much larger scale and featuring incredible detail, so I'd search those out instead, especially the dragon.

But if you're willing to spend that kind of scratch for this kind of thing, I highly recommend going for X-Plus' exceptional 12" Kali. 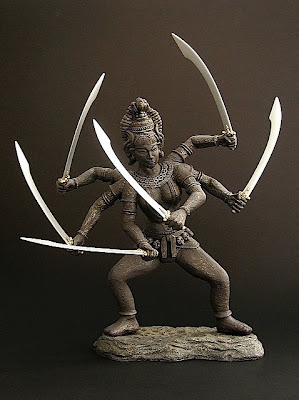 The 2002 X-Plus 12" Kali. (photo by J. Pidgeon)
Released in 2002 as a limited edition of 5000, this one's simply gorgeous, with a convincing fake stone texture (it's made of vinyl), and its arms have enough articulation to occasionally vary the figure's positioning. It's available on eBay for $150, with another $25 tacked onto that for shipping. If you have the disposable cash, I say go for it. I got one when it first came out and it looked beautiful while I had on full-time display; mine now resides in a box because not only is it tall, it's also rather wide, and as a result it takes up a good deal of shelf space.
Posted by Bunche (pop culture ronin) at Wednesday, January 19, 2011

Actually she might have done the Natraj Dance which is fine for a Goddess to do as a show of power BUT as for design she looks EXACTLY like the Goddess of victory in warfare Koravai..which later in Hindu mythology became an aspect of Kali. Though in truth she is a stand alone South Indian Goddess!