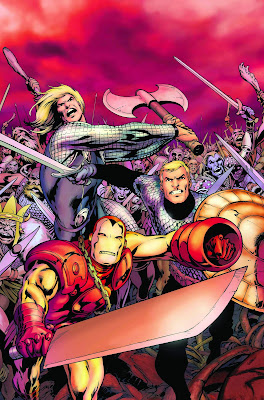 SPOILER WARNING! If you have not yet read this particular comic and plan on doing so, don't read this post!

Now that 2011 has begun, it's time to start taking note of the year's best comics, and right out of the gate we get AVENGERS PRIME #5, the excellent conclusion to a majorly fun mini-series. But before I get into discussing it, a little background for the non-geeks who may be reading this.

Those who have been reading comics since 1961 know that the comics put out by Marvel form a massive collective narrative tapestry commonly referred to as the Marvel Universe, and it all amounts to a soap opera about super-types. While not all of its titles are directly interconnected, the tales told of the Marvel Universe and its assorted champions and ne'er-do-wells do spill over into one another and sometimes the ramifications of a particular narrative "event" do have a marked effect on the whole shebang, sometimes for years on end. The most recent perfect case in point would be the events of "Civil War," a 2006-2007 multi-part, imprint-wide crossover (which followed another imprint-wide crossover, and so on) that saw Tony Stark (aka Iron Man), a long-established hero known for making some very bad judgment calls, chief among which in this storyline was backing the Superhuman Registration Act. The Superhuman Registration Act essentially boiled down to a law requiring all super-powered beings (and non-superhuman crime-fighters) to register with the government, exposing their true identities and operating with governmental approval, and that mandate demanded full compliance or those who did not fall in line would face prosecution and imprisonment. Tony Stark, who had always maintained strong U.S. government connections from his capacity as one of the world's top advanced munitions developers, supported full compliance, which rendered him a pariah in the eyes of much of the superhuman community, and soon ideological battle lines were drawn between Stark's faction and that of Steve Rogers, better known as Captain America (perhaps the most true blue and morally unquestionable superhero ever). Cap and his group of outlaws fought the good fight on the grounds that that the Registration Act violated their civil liberties, but many dire events spun out of the "Civil War" arc, two of the most egregious of which were the surrender and subsequent presumed assassination of Captain America (as chronicled in the best-selling "The Death of Captain America"), and the ill-advised cloning of the presumed-dead Thor to create an dangerous out-of-control duplicate with the strength of raw power of its genetic source.

In the years following the end of "Civil War," readers endured the seemingly endless wait for Cap's inevitable return (which finally happened in CAPTAIN AMERICA: REBORN from 2009-2010), Tony Stark's tenure as head of S.H.I.E.L.D., and the return of the real Thor, who, as one would be right in imagining, was greatly offended at being cloned without his knowledge (which earned an armored Stark a long-overdue ass-kicking), leaving the three core members of the Marvel Universe's #1 super-team, the Avengers, either at odds or in states of outright hostility with one another. To a longtime follower of the overall Marvel Universe soap opera, that was some tragic shit.

Now comes the five-part AVENGERS PRIME mini-series, written by Brian Michael Bendis and superlatively illustrated by Alan Davis — one of my favorite comics artists of the past two-plus decades — with inks by the equally-talented Mark Farmer. It not only gives me a visually-stunning fix of Marvel's version of several Norse realms (cobbled together unnaturally by a convoluted series of events), but it also finally allows the deep battle scars that divided Thor, Cap (who is now simply Steve Rogers, but in charge of U.S. security) and Stark to be somewhat healed as the contentious trio are thrown headlong into the strange area of living mythology and forced to work together to survive and try to find a way back to Earth. A lot of neat stuff happens as the heroes air their grievances — mostly and deservedly at Stark — , get separated and have to fight all manner of threats in order to stay alive (Rogers' one-man melee against a horde of heavily-armed Dark Elves was a show-stopper), Thor loses his hammer (a very big deal), Stark's armor is useless so he must cobble something together with limited resources, the dragon Fafnir shows up, the Enchantress shows up, about a gazillion dwarves, elves and monster battle it out on an epic scale... 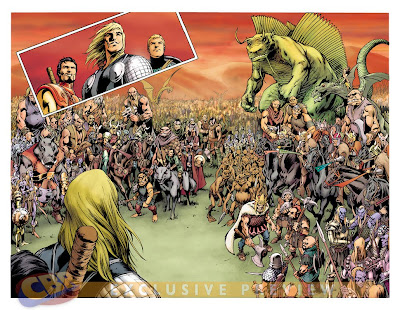 Thor assembles an army of disparate and hostile factions... 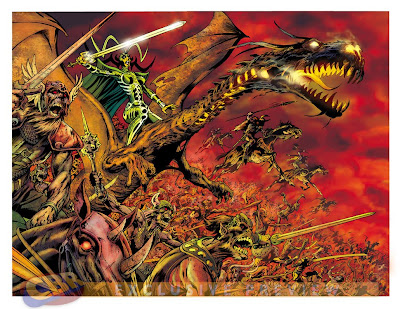 ...to battle against a horde of monsters led by Hela, the Norse goddess of death (who has never looked more awesomely badassed). Ho. Lee. SHIT. (Click on these to see them large. Believe me, you really want to.)

Jesus, a whole bunch of fun and cool shit happens, okay? And it's interesting to note that in five issues there's more brisk and solid entertainment than I got out of any of the bloated, overlong comics epics that have come in the wake of DC's "Sinestro Corps War" arc (2007).

But the thing that was the icing on this delicious cake was the moment near the end when our three heroes take the steps to restoring their friendships. After facing and defeating the impossible for the umpteenth time, Rogers and Stark express admiration for each other's performance in the final battle, which leads Rogers to apologize for some of the things he (rightfully) said to Stark in the first chapter. Stark, in turn, makes a deep and heartfelt apology to Rogers for his considerable assholism during and since "Civil War," stating to the former Cap that he feels he's not half as good at anything as he is when he's doing it with Rogers and that he hopes he will be allowed to earn back his friendship, after which there's a silent panel of Rogers looking Stark square in the face while placing a firm hand on his shoulder. Rogers then embraces Stark, who returns the hug, and a number of their colleagues smile in silent acknowledgement as two of the cornerstones of the Marvel Universe's main cast patch things up. It was a real bromance moment, and I have to admit it brought a tear to my eye. There will definitely be a long road back to full reconciliation, but it all starts right here, and it warms my heart to see the heart of the Avengers on the road back to once again being a harmonious unit.

To sum up: AVENGERS PRIME #5 earns a solid 10 out of a possible 10 for every aspect of its final results and will be on my shelf the second the collected edition inevitably comes out. This is the kind of thing that filled me with delight at my heroes when I was a kid, and it's rare that I get that feeling as an adult, so this was pure gravy.
Posted by Bunche (pop culture ronin) at Friday, January 07, 2011

You'll never convince me that a Bendis written book is any good. I've been disappointed too many times that claim was made.

I read this last night and agree on all your points. It was great, fun stuff.

Alan Davis is one of the few artists out there that can make ANY comic book look great, no matter how bad the story is (George Perez being another).