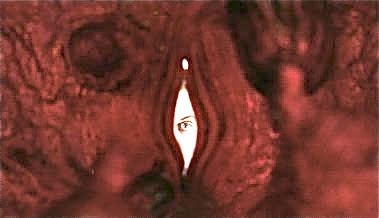 A view from the inside...of Jennifer.

I was born with seven clits. Seven that I know of, seven I that can feel and touch. Seven separate clitorises, each one constantly craving attention. Actually, I'm pretty sure that there are more than seven,  but the others are buried so deep inside that only a doctor could find them. And I'm sick of doctors. Doctors probing, doctors touching...Doctors, doctors, doctors...To some, I was a perfect example of permanent sexual arousal syndrome, but to most I was imply the girl with the crazy pussy.
-Jennifer, BAD BIOLOGY'S protagonist.

With an opening monologue like that, there was no way in hell that I wouldn't include this film in this year's review series!

Blonde, attractive Jennifer (Charlee Danielson) is a photographer who aggressively and artfully documents her dark, weird vision of sexuality, a vision that stems from her own...curious condition. You see, Jennifer is some sort of mutant whose difference involves her utterly bizarro genitalia and reproductive capabilities. Having begun menstruating at the age of five and cursed with seven known clitorises (there may be more within her somewhere) that make her perpetually horny and insatiable, Jennifer sees herself as her own species, "a new species. The doctors think I'm a genetic mistake, but I believe I'm an evolutionary leap forward, a female of the future who feeds on orgasms the way you people devour burgers and fries." Her unquenchable need leads her out at night to prey upon assorted thuggish lowlives in bars and dodgy pool halls and drag the unwitting studs back to their places, where she proves to be a thrashingly animated lover who demands her lovers cum insider her and whose inhuman throes of sexual ecstasy occasionally result in her killing her partners (whose corpses she photographically documents). After a typical fatal tryst, Jennifer immediately consumes large quantities of food before retreating to the nearest available bathtub or other private spot where she gives birth to full-term babies less than two hours after conception, then abandons the squalling infants wherever she births them, caring nothing for them because she's sees them as "fake, unfinished freak babies" since "real" babies take nine months to happen. All of this information is imparted within the film's first fourteen minutes, and things only intensify from there.

BAD BIOLOGY is by no means flawless — none of Henenlotter's films are — but it tackles some very delicate and potentially offensive material with its tongue planted very much in cheek, and its extremely prurient content is especially tragi-comic to those in the audience who enjoy romance and fun sex that makes the participants feel good both physically and emotionally. The plights of Jennifer and Batz are quite miserable and viewers will want to see them connect and find some measure of relief and comfort in each other, but comedy though it may be, BAD BIOLOGY is still quite horrifying at its heart, and it never forgets that for even one minute. I dig it but there are those who might find it a bit too much to take, so carefully consider your own limits for this kind of thing before checking it out. A date movie it ain't, unless you and your squeeze find tormented mutant genitals to be a major turn-on.
Posted by Bunche (pop culture ronin) at Sunday, October 07, 2012