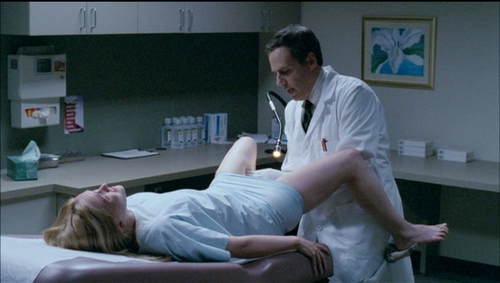 Perfectly striking the incredibly delicate balance between dark comedy and outright horror, TEETH has the look and feel of any garden variety teen coming of age comedy, with its narrative centered on Dawn (a winsome Jess Weixler), a sweet high school student who serves as a very vocal proponent for Christian pre-marital sexual abstinence. Living in the shadow of a twin-towered nuclear power plant, Dawn shares a house with her father, terminally-ill step-mom, and very creepy, obviously disturbed older step-brother, Brad (John Hensley). As adolescent biological urges wage war with Dawn's stance on abstinence, Dawn fails to recall an incident from her early childhood in which her already hateful soon-to-be step-brother (who's maybe five or six at the time) curiously tries to digitally probe her vagina while they're both in a kiddie pool, only to end up with the tip of the exploring finger getting mysteriously severed. It turns out that for whatever reason (my money's on the nearby nuclear plant), Dawn possess the literal "vagina dentata" of mythology, the teeth of which are described as being akin to those of a lamprey, and her self-imposed sexual repression keeps her toothy nether region in check. Unfortunately for Dawn, as she struggles with her utterly normal teenage desires, she runs afoul of a string of predatory, misogynistic peers and grown men who find themselves on the severing receiving end of her snapper's chomping defensive reaction, which leaves the sweet girl feeling horrible guilt while also considering herself and her budding adult sexuality as inhumanly monstrous.

TEETH is simultaneously funny, horrific, and unsettling in what it has to say about how society treats women by means of infantilization and repression of their sexuality and the autonomous control thereof, as well as male domination of women's bodies and the maintaining of a casual rapist mentality of the entitled oppressor. The narrative paints a very negative picture of the male in general society  — virtually every guy in the film sexually abuses Dawn, with the notable exception of her dad — and has been railed against by some as a flagrant piece of misandry-laden femi-nazi propaganda, but I don't see it that way at all. The story is clearly intended to be a very dark comedy that tackles some very tough subjects while addressing long-held cultural taboos about all things vagina-related, and the men in the story have to be verminous creeps in order for its impact to succeed. And though her Cronenbergian "body horror" may lead some to consider her a monster, Dawn is anything but horrific and she is quite likable, which only makes the audience care for her all the more and want to see her arrive at some kind of peace with her literally mythic pussy.

TEETH is right up there with BAD BIOLOGY as a modern comedic examination of fear wrought by our own genitalia, and is by far the better-crafted of the two. I recommend it in general, but most especially for women who have a sense of twisted humor when it comes to their own girly bits. 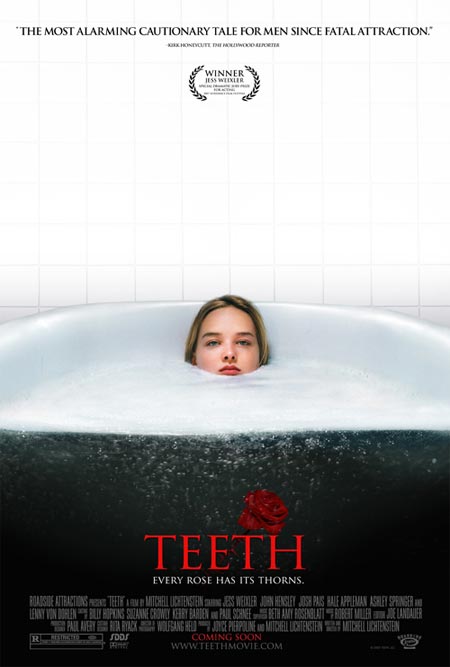