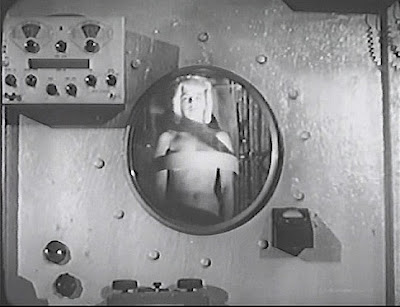 Three new bodies. Fresh, live, young bodies. No families or friends within thousands of miles, no one to ask embarrassing questions when they disappear. Victor wondered which one Mrs. March would pick. The little Mexican, the girl from Vienna, or the buxom blonde? Victor knew his pick, but he still felt uneasy, making love to an 80 year old woman in the body of a 20 year old girl; it's insanity!
-the film's narrator

One of the staples of my movie education during the glorious pre-cable days were mad scientist movies, and few of them came any madder than this bit of no-budget lunacy. Originally released as MONSTROSITY, this flick is one of those mostly undistinguished and rather generic black & white oddities that would have deservedly languished in obscurity if not for some of the utterly bonkers elements found in its plot.

The film tells the story of a nasty old woman who lives with an unappealing, overage gigolo and seeks to transplant her still nimble and thoroughly evil brain into the body of a young hottie, at first relying on her live-in mad scientist's experiments with freshly-dead nubile young women to yield results. Initially testing his procedure using the brains of animals transplanted into human bodies, the scientist generates a mutant dog/man for no apparent reason other than to serve as an odd-looking and none-too-bright servant, but that avenue of "science" proves a bust when it is determined that the nerve endings of the dead are too far gone to allow a brain transplant to take. With that stumbling block noted, the evil old lady takes out an ad for a new cleaning woman and soon ends up with the three girls described in the narration quoted at the beginning of this post. In short order, the poor Mexican girl is deemed not pretty enough for the old bag's needs and falls prey to the mad scientist, who takes out her brain and replaces it with that of the resident housecat. Why? Your guess is as good as mine but it was apparently for shits and giggles, laughs that were guaranteed when we got to see the "Mexican" actress imitate a kitty in human form and scarf down a live mouse.

As if the general creepiness of the old lady's mansion and the presence of the mutant dog man wandering about the grounds were not enough to cause the remaining pair of girls considerable unease, the disappearance of their Mexican colleague and the old lady locking them in their rooms to ensure that they don't attempt to escape soon twigs the girls to the fact that all is not kosher. During an escape attempt, the British girl is accidentally partially blinded and the remaining blonde bombshell is swiftly prepped for surgery. Having previously signed a legal document, it is revealed to the blonde that her signature was needed so the old lady could legally declare her the heir to her vast fortune (she's described as "one of the richest women in the world," but we are never told where her fortune comes from), and once the old bitch's brain is in her new young (and not coincidentally hot) body she'll pretend to be the young woman, who will be the only survivor when the mansion, its inhabitants and the old lady's body are destroyed in a planned nuclear explosion. But what the old lady does not anticipate is the hatred she's engendered in the scientist and her gigolo after untold years of abuse; both men were willingly strung along in hope of getting a piece of the inheritance when the transplant occurred, but with the blonde now legally declared the sole inheritor, they've had enough. As the blonde and the old lady are strapped to the operating table and anesthetized, the scientist wreaks horrible (and ludicrous) revenge upon the old woman, leaving the blonde untouched but transplanting the old lady's brain into the housecat, leaving the old lady's intelligence exactly as it was but now trapped in the non-speaking and comparatively impotent body of a common tabby. Reasoning that he'll still have access to the money if he keeps the blonde alive and drugged, the scientist readies to embark on a new life of leisure, but his plans are thwarted when he enters the atomic brain-swap chamber (pictured above) for a final cleanup and ends up locked into it by the pissed-off housecat. The cat then activates the machine, reducing the mad scientist to a skeleton and setting off the chain reaction that will destroy the house. The blonde manages to escape, as does the cat, whom, the narrator informs us, plans to follow the girl and someday, some way, get revenge. THE END.

I've seen countless movies about brain transplants and laboratories that blow up at the end of the movie, but never have I seen such a scenario involving the machinations of an evil housecat who is equipped with the brain of a horny octogenarian. The image of the cat pressing the auto-destruct button with its paw is hilarious, and the idea of said housecat embarking on an implacable quest for vengeance is the cherry atop a glorious confection of implausible ridiculousness. I know one is supposed to completely suspend disbelief for this kind of flick, but even by the standards of D-grade movie science, this just takes the cake. I mean, when the cat's brain was stuffed into the Mexican chick's head, did the doctor account for all the leftover cranial space by filling the rest of the skull with cotton wadding? Would the tiny cat's brain still wobble about a bit, regardless of the stuffing? And when the doctor puts the old lady's brain into the cat's head, how could her brain have possibly remained cognizant, let alone even remotely functional, with a good 85% or more of its mass excised in order to fit into such a vastly smaller skull? Frankly, I don't care. I just love that the screenwriter had the balls to come up with it and not give a flying fuck about even the smallest shred of logic. RECOMMENDED. 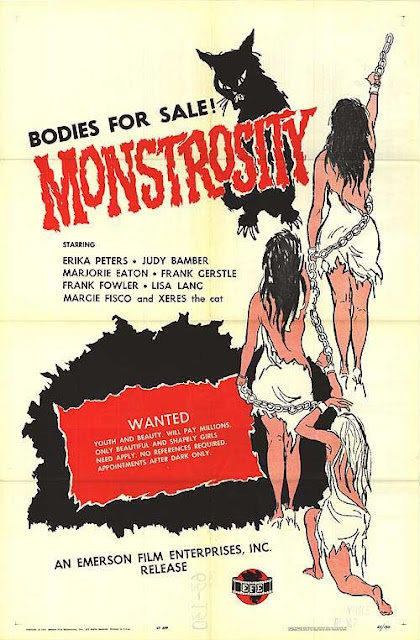