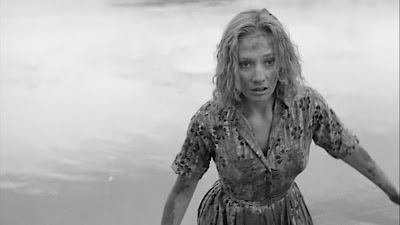 Remember the 1960 episode of THE TWILIGHT ZONE, "The Hitchhiker?" Well, director Herk Harvey's 1962 effort, CARNIVAL OF SOULS, tells much the same story, only at greater length and with the atmosphere and queasy creepiness cranked up to 11.

When church organist Mary (Candace Hilligoss) miraculously survives a drag racing accident that plunges a car full of herself and her girlfriends into a river, the spooky young woman moves to a job at a new parish in Utah and finds herself in a constant state of terror as she's haunted by a mysterious and silent chalk-faced man (Herk Harvey). This creepy figure turns up everywhere she goes and is sen by no one but Mary, and as if that's not bad enough, as the days progress, Mary begins to see more and more figures of her mute stalker's ilk as she begins to feel strangely drawn to an abandoned carnival pavilion on the shore of the Great salt Lake.  As her paranoia increases and her grip on reality erodes, Mary herself occasionally becomes imperceptible to those around her, an aspect that threatens to send the poor woman straight over the edge into shattered madness. The question is just what the hell is going on? The answer to that is obvious to anyone who saw "The Hitchhiker" or other not-dissimilar tales of driving-related hauntings. 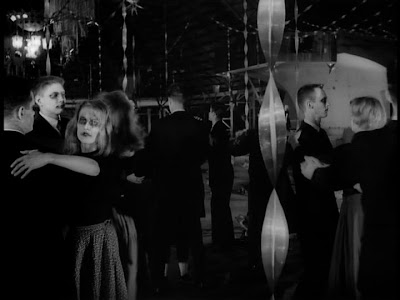 The titular carnival in full swing.

I've never been a big fan of stories about hauntings and ghosts, but CARNIVAL OF SOULS holds a strong and very special place in my heart because it is genuinely eerie and possesses a positive surfeit of old school black-and-white atmosphere (which is aided in no small part by the film's all-organ score). The narrative progresses with a feel and pacing that's downright dreamlike, and that dreamlike aesthetic lugubriously builds to a full-blown nightmare by the time all is said and done. There are no visceral shocks or gory violence, and yet the viewer is held in the film's thrall by Candace Hilligoss's nervous, haunted turn as Mary. The film rests squarely on her performance, and its what she so memorably delivers that has earned her and the film its considerable, well-deserved cult rep. This is a thoughtful, quiet tapestry of utter creepiness and it's suitable for all ages, with Yours Truly strongly recommending that "horror parents" sit their impressionable young ones through it as early as age five or six. Sure, it may give them nightmares, but the grounding they'll receive will serve them well as they find their way down the path of the horror movie devotee, hopefully engendering a taste for the classy stuff early in their development. If not, there's always THE TEXAS CHAIN SAW MASSACRE. 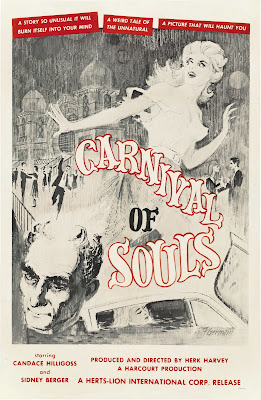