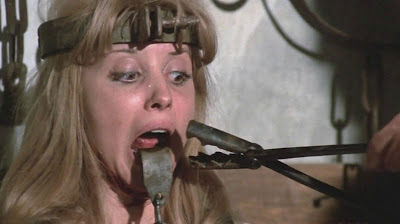 Remember a few entries ago when I talked about WITCHFINDER GENERAL, a classy movie about foul, manipulative torturers who roamed about ye olde Englishe countryside doling out cruelty, extortion, and rape while taking advantage of the fearful and ignorant and claiming to be doing God's work? Well, bunkies, now's the time to enlighten you on what can happen in the wake of an artful work dealing with highly unpleasant subject matter, namely the crass exploitation of the worthwhile piece's less-than-savory aspects. That's right, I'm talking about WITCHFINDER GENERAL's embarrassing bastard child, the odious MARK OF THE DEVIL.

Released in 1970, this West German shocker was originally entitled HEXEN BIS AUFS BLUT GEQUALT — which my fluent-German-speaking pal Mindless Kirby assures me translates as WITCHES ARE TORTURED TO DEATH — and its threadbare plot wastes the talents of both a young Udo Kier (a very versatile actor whom I've always liked and genuinely feel he's never received the recognition he deserves) and the ever-reliable Herbert Lom in what is essentially an uninvolving excuse for a good number of graphic sequences of innocent young women enduring sadistic torture after being falsely accused of witchcraft. That's really all there is to it and even though it's vile, disgusting, and incredibly sleazy in its presentation, its scabrous "thrills" eventually get old and in no time you'll find yourself looking to down another beer or throw in your ever-within-reach copy of 18 AND NASTY VOL. 10 (which I recommend infinitely more than MARK OF THE DEVIL) and heartily begin shuffling off some knuckle-children. I don't mean to skimp on outlining the details, but there really is no point in doing so with this one, and I only mention it because it's the middle stage in the evolution of its niche in the genre, which paved the way for the ultimate and very classy witch-related torture film that succeed it. But more on that later...

My main reason for bring up MARK OF THE DEVIL was due to the lasting impact it had on me when I was about three months away from turning seven years old, just before my family left California and moved to the opposite side of the United States. It was the spring of 1972 and this wee Bunche was accompanying his mother and aunt to a local shopping mall. Once the station wagon had been parked in the outdoor parking lot, we went inside and spent however long shopping and enjoying lunch in the food court, and when we went outside we were greeted with the astonishing sight of nearly every car in the lot having a folded and (thankfully) unused MARK OF THE DEVIL vomit bag tucked snug under one of the vehicle's windshield wipers.

An example of one of the bags that so sparked my under-seven-year-old admiration.

My mom and aunt were both perplexed but soon sussed out that the bags were basically the kind one received on airplane flights so one could hurl during turbulence, only here they were re-purposed to catch geysers of spew brought on by the myriad horrors that MARK OF THE DEVIL so merry splashed across the screen like so many buckets of offal during the film's American release's novel publicity blitz. My elders were highly amused by this and when they explained it all to me, I was absolutely delighted at the concept of a film so gross that it actually made people vomit. Unfortunately, my mom removed the MARK OF THE DEVIL vomit bag from beneath the windshield of her station wagon and promptly threw it away, which is a great pity because now those fucking things are collector's items and I would love to have one. (They can be had for cheap and one day I'll get one — or more — but to have the very one from that magical, formative moment in my childhood would be sheer bliss.) 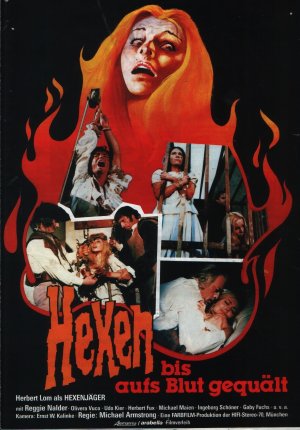