ANOTHER OBSERVATION ON THE TEN COMMENDMENTS (1956) 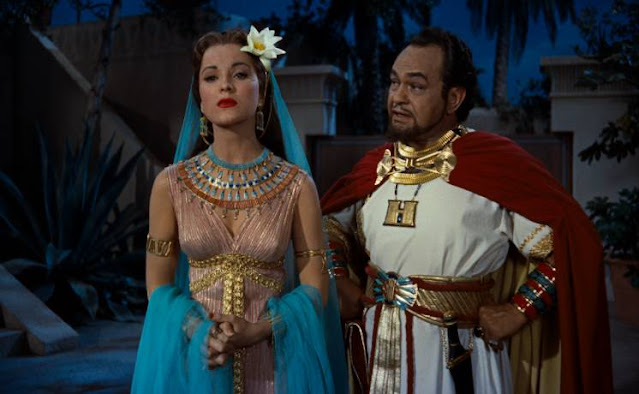 This time around with THE TEN COMMANDMENTS (1956) finds me paying closer attention to certain plot details. For example: In the scene where the vile Dathan (Edward G. Robinson) has acquired the slave girl Lilia (Debra Paget) as part of a massive and lucrative "thank you" package from soon-to-be pharaoh Rameses (Yul Brynner), and he has her dressed in sexy finery by his house slaves. He orders a purple flower removed from her hair and replaces it with a "more appropriate" white one, a clear symbol letting us know that she is a virgin. Now she is not only very much unwillingly Dathan's property to do with as he pleases, but her compliance to his sexual whims will prevent Joshua the stone cutter (John Derek), from being sent to an horrific life in the copper mines (a promise that is never kept, unbeknownst to her), so she utterly surrenders her dignity and weeps while swearing to Dathan that she will do anything to save her love's life.

It was always obvious to me what Lilia was being leveraged into, but this was the first time I noted the flower as a virginity signifier. Makes the scene that much more tragic, once one grasps that rather obvious symbol that I somehow missed for over forty years.