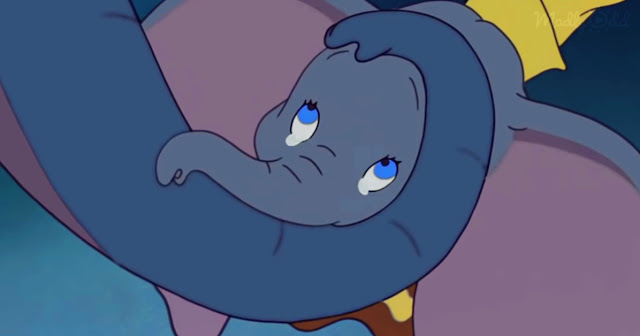 I'm not crying...YOU'RE crying!!!
So...
I watched DUMBO (1941) again the other night, the first time I'd sat through its entirety in close to 20 years, and while I consider it to be among the strongest of Disney's early features, I doubt that I will be able to sit through it again any time soon, and if I do I definitely will not enjoy much of the experience. You see, I have adored elephants my entire life and if a nature documentary is on, I will stop whatever I am doing to observe the footage and any new information that may be imparted. Meaning that I get elephants for who and what they are, so witnessing the outright cruelties inflicted on wee Dumbo from virtually the moment the stork drops him off is an agonizing ride.
Dumbo (and let us not forget that his actual name is "Jumbo Jr.") is relentlessly abused and bullied by all and sundry, with the sole exceptions of his mother and Timothy the mouse, and he's just a defenseless baby. When his mother justifiably rampages against a kid who's abusing her child, she is attacked and whipped by the circus's ringmaster and assorted roustabouts as they subdue her, and she ends up in chains, separated from Dumbo while he is forced into the humiliating and dangerous role of a clown, and the viewer's heart breaks. Then the "Baby Mine" number comes on, where Dumbo visits his mother during her imprisonment and the shackles prevent his mother from coming close to the window to actually see him, so all the she can do is extend her trunk through the bars of her prison to caress the wee, weeping baby while singing him a lullaby. For me, it's the Disney moment that wields the most emotional power. A real haymaker that just comes in and mercilessly shatters what remains of your broken heart into about a million shards. I wept for all I was worth while watching it. Utterly wrecked me.
And do NOT get me started on the murder of crows who befriend Dumbo and Timothy and sing the now-infamous "When I See An Elephant Fly." I wish Richard Pryor or Paul Mooney had commented upon that sequence. Watching it this time, I was shocked by its sudden intrusion of outright minstrel show antics in a tone completely at odds with the rest of the film. I have no illusions about such material in old Hollywood productions, but as seen here it was just odd, and it mars an otherwise excellent (if painfully miserable) classic. (Same goes for "What Made the Red Man Red" in PETER PAN, and that was arguably a better song.) 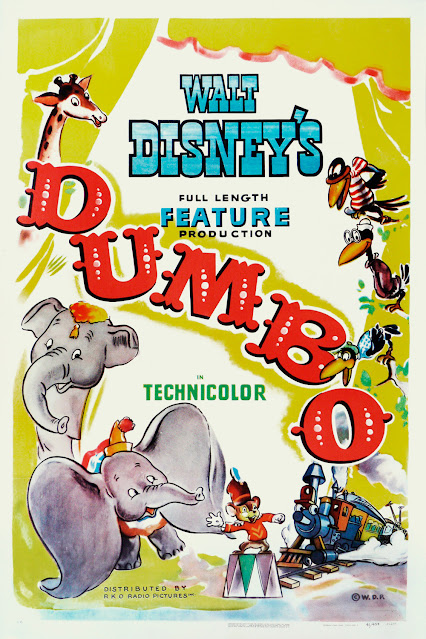