AMONG THE TURKEYS: RANDOM MUSINGS ON MY HOMETOWN 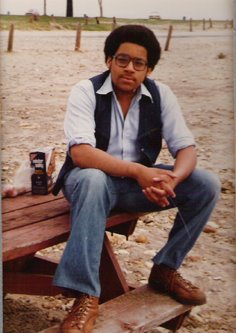 Yours truly-Westport, CT 1981. Can you believe I was parentally berated for being fat when this was taken?

One of the things that entertains and saddens me most about returning to Westport even for the briefest of times is just how much the place has changed since I first arrived here in 1972, just two weeks shy of my seventh birthday. I know, I know, "you can't go home again" and all that, but the slow, insidious metamorphosis that Westport has undergone is truly disheartening to witness.

My friend since junior high school, Walter, and I drove about the town on Thursday afternoon, a lovely day, and absolutely perfect for taking the guy on a tour of a town he hated and left long ago. Neither one of us ever fit into the town's mold of pod people in the making and consequently hold no love for the place, but since I occasionally drop in for a visit with mumsy I see what goes on. Walter, however, was unprepared for what he saw, deciding that somehow Westport has actually managed to get worse, becoming even more of a soulless, faceless "Stepford" than ever before. That statement put me into a contemplative frame of mind, and I mulled over a few things that are of no real importance and may come off as bitter, but what the hey? I have nothing better to do at the moment other than care for my mom's aged, vicious and incontinent chihuahua...

One of the more unfortunate results of the community expanding and clearing what remains of the area's wilderness to build horrible and ostentatious "McMansions" is the fact that the abundant local wildlife is forced into direct confrontation with man and the general populace actually has the nerve to be offended when the rightful non-human residents make themselves visible and wander about homeowners' properties in search of food. Hordes of Thanksgiving-style turkeys strut about like a feathered army (the people in my neighborhood embrace their visual absurdity and frequently feed them), deer traipse around and devour every plant that's not covered with chicken wire or sprayed with a chemical that simulates the scent of wildcat piss, groundhogs wobble hither and yon, and my mother even told me that she's seen a fox hanging around our back yard, all of which goes to prove that these critters have nowhere to go. What will become of them in the next ten to twenty years? 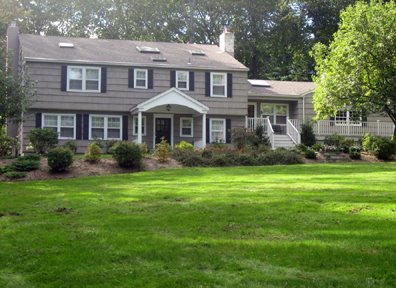 Walter and I drove past the house that my family moved into in 1972 and it still galls me that I no longer live there, thanks to the bad blood between my parents during their bitter divorce proceedings. The place was huge but not ostentatious in the style that prevails now, and if my mom and I could have stayed there I would have serious reservations about selling the place and never returning when she inevitably joins the Choir Invisible. I love the much more modest house that I grew up in from 1980 on, but when the time comes to deal with such depressing matters I will sell it, take the money and invest it in a home in a location that has yet to be determined (but definitely NOT in Connecticut) and never return to my despised home state for as long as I may draw breath.

Yet despite the proliferation of offensive housing, there remain a few spots that display the rustic charm that Connecticut can exude, such as this gorgeous stretch of land located right next to an office complex off of Nyala Farm Road. I have a great love for this location for a few reasons, chief among which is this view that brings "Christina's World" to mind. 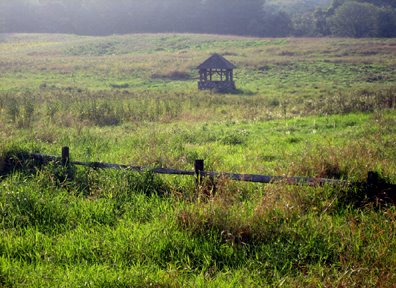 Lastly, in an effort to curb the rampant speeding on the back streets, many speed-bumps have been added to the roads and I support that decision because for as long as I can remember there have been countless speeding/drunk driving-related deaths here, some of which claimed the lives of kids I knew while growing up, both those behind the wheel and innocents who happened to be on the road while other drunken assholes decided to drag race. The only down side to this new policy is the unfortunate choice of wording for the signage. I mean, when did they stop calling them speed-bumps? 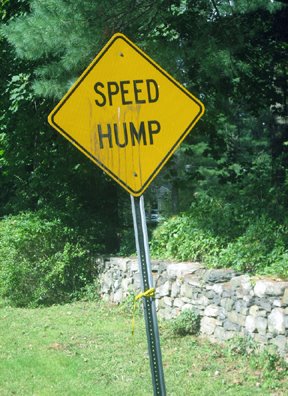 Maybe that fox was looking for a chihuahua dinner.... Something to think about.

Steve, it was a real pleasure seeing you in Westport. I really do hate that place, and many bad memories, which I thought had been exorcised, came back with a vengeance. But still, if not for Westport, I never would have met you. You were far braver than I ever was back when we were in Staples High School, and never were afraid to be yourself, and damn all the rest. I believe I learned more about good music, pop culture, bad movies, trash art, etc., than I ever learned anywhere else. You seemed to come out of Westport relatively unscathed, whereas it took me a good five years to get on. And by the way, that Gumbo was pretty damn amazing!