While watching an episode of SPONGEBOB SQUAREPANTS on Nickelodeon I saw an ad for the latest in the legion of Barbie doll sets and almost snarfed out my orange juice over the hilarity of the commercial. 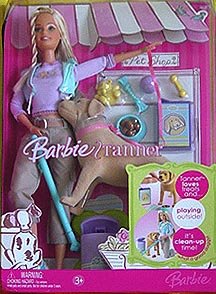 This latest ad was for Barbie and her dog, Tanner, a cute felt-covered pooch that Barbie feeds treats to. So far, so normal. 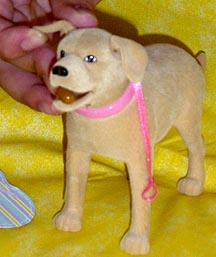 Then the ad switched to a closeup of the dog's ass, and when you push her tail she drops a brown payload. 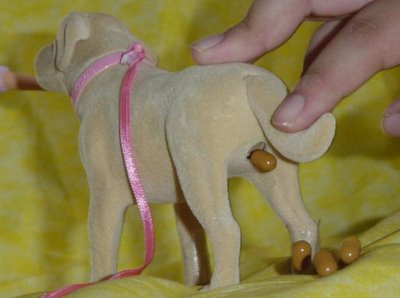 Said payload can then be scooped up by Barbie and placed in a handy doody recepticle. 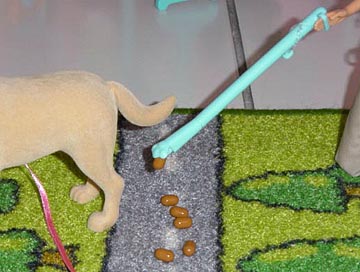 Now ever since I was a kid I thought the myriad outfits, cars, houses, spaceships (yes, there was an astronaut Barbie during the late-1960's) and whatnot were supposed to allow little girls to live out just about any fantasy scenario that they could think of. So does this latest addition to the line mean that little girls harbor dreams of cleaning up steaming piles of dogshit?
Posted by Bunche (pop culture ronin) at Monday, September 25, 2006

The most disturbing part is that I swear the treats look just like the shit.

Come to think of it, dogs do eat shit, don't they? Do you remember our dog?

What's next? A Barbie doll that takes a shit?
-Xtina

Believe it or not, this is a re-toy (improved though). I found pooping dog toys at a yard sale a couple years ago and bought them for my niece and nephew. (Why not?)

No worries about the choking. Look very closely. That shit is a jellybean. So, not only does the dog eat shit, so does your kid!

Ick-factor aside, which Madison Avenue idiot thought this would sell? Someone should can his ass!

Look for the SouthPark to smack their heads and say, "How did we miss putting that into 'Team America'?"

Makes me wish I was a seven year old girl, just so I could ask for it for Christmas. You know what I.m going to ask for it anyway, get ready Santa! I'm a'comin!

So, do the people with the huge Barbie collections actually buy these things? Are they stuck in the back somewhere, behind the Bob Mackie dolls? I've seen pooping toys, but I thought Barbie was "supposed" to be a bit classier...

"Ick-factor aside, which Madison Avenue idiot thought this would sell? "

Clearly... A genius!! I will buy this and proudly display it next to my vintage Type 1 Mego Superman!!

I want the toy just to have a very interesting Tic-Tac dispenser!

I think its great, its funny as hell, admit it, if you saw it you'd laugh and it teaches responsibility after all if you have a pet you will have to clean up after it!!!

My name is Tanner... Christ.

that barbie doll needs a POOPOD

Sometimes I poo on my dog. Wait... Did I just say that?