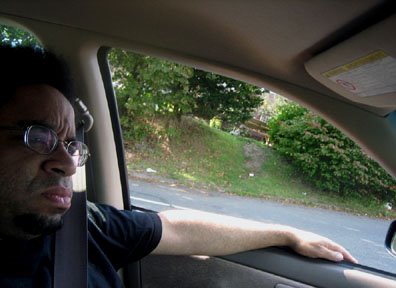 Weary of the seemingly endless rewrite that I'm working on for Tokyopop (the latest volume of GIRLS BRAVO), I hopped into the car and drove about Westport looking for a diversion. Eventually I ended up at the enormous Stop & Shop supermarket near the Fairfield border, and decided to pick up something to make for dinner.

The store in question is enormous, definitely the largest in town, handily combining a supermarket and a department store, and while aimlessly perusing the wares I wandered into the aisle that housed a plethora of cheap and crappy Halloween stuff such as bad wigs, plastic pitchforks and the like. It all looked unremarkable, but it did make me happy to think of the arrival of Halloween. Why, just yesterday while at the CVS pharmacy, I found a great and cheap toy of Charlie Brown that came with a cloth slip-on replica of his famous ghost costume, the one with dozens of eye holes, from "It's The Great Pumpkin, Charlie Brown," and that toy will soon adorn space on the barbecue joint's kitchen sill for the duration of the season.

While looking over the slim seasonal pickings my eyes riveted onto what at first looked like a replica of a "face-hugger" from the ALIEN movies, but upon closer examination was revealed to be a beer funnel, just like those found at collegiate keg parties nationwide, only with the funnel itself fashioned to look like a mandible-less human skull, while the almost three-foot long tube was made to simulate a dangling spinal column. 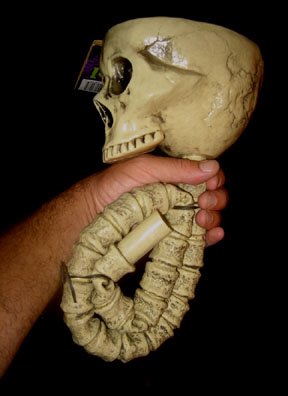 If the infamous cannibalistic necrophile and morbid craftsman Ed Gein had been invited to a frat party, I can imagine him showing up with just such a party-facilitating item. And think about it, you just know some sickass sumbitch is gonna use this thing to administer red wine enemas... 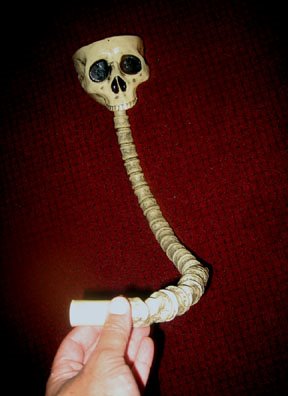 As previously mentioned, it was cheap — only $7.99 — and there was no way I was walking out without buying one. And with that purchase, my Halloween planning has begun in earnest!

For a few weeks I have contemplated just what I would go as this year, and settled on a classic monster. The usual faves such as Frankenstein, Dracula and such have been done to death, and I really wouldn't attempt them unless I could really bring something new or interesting to them. And forget about the Mummy; I like to party while in costume, and that outfit is one hell of a fire hazard, to say nothing of being a serious problem if you need to take a leak, so that one was right out. As much as I love werewolves, I decided against that one as well because I'd like to take at least three months to craft something spectacular, and until recently I just wasn't feeling it this year. But I'm back on track, and after mulling it over once more I have decided to do my own low rent take on the 1958 version of the Fly.

The Fly will be simple enough to achieve since the results of that famous teleportation fubar amount to an oversized fly head and a claw, so I came up with a basic design: 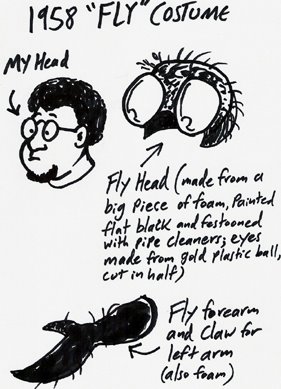 I'll have to get my hands on two pieces of foam, one about twice the size of my head, and the other large and long enough to cover my left hand and forearm. Using a reference shot of the character from the movie, I'll remain as cheesily faithful to its look as possible, however I'll tweak it a bit for comfort. My head piece will fit snugly over most of my skull, with the front portion ending just above my eyebrows. After hollowing out the head and carving it into the desired general shape, I'll spraypaint it a flat black and uses pipe cleaners or some other stiff-yet-wiggleable fibers to simulate that grody fly hair, and then I'll get one of those large, gold rubber balls like we all played with as children and cut the fucker in half, thereby providing the eyes. Those will be affixed with hot glue, and I'm still debating adding the feeding "proboscis" so that it comes out just above my nose. Once the fly helmet is completed I will blacken my face to match the paint job as closely as possible and obscure my features; hopefully an onlooker's gaze will be focused on the huge, gold eyes and not so much on my unconcealed glasses.

The claw will get the same paint and fiber attention, and I will fashion it into a form similar to a jai-alai glove so that my left hand will be concealed yet fully functional (a beer-holding claw will look great during photo-ops!). And once that's completed I'll top it off with a lab coat.

MAN, am I looking forward to Halloween!!!
Posted by Bunche (pop culture ronin) at Saturday, September 30, 2006

I miss the hell out of you Bunche. I'm coming out there for Halloween. This I must see.

Personally -- I'm going as Mark Foley. I figure I'll pick up the classic cult DVD "Chicken Hawk" to help me get the mannerism's right.

I'm still undecided as to what I'll be for Halloween. After you do Powergirl, nothing can really compare, you know?

(Of course, I said the same thing about my Harley Quinn costume from 2002...)

Scott and I were considering Arthur and Carmelita from The Tick, but he thumbs-downed anything that would involve him in a unitard and tights. ;)