For many years I have avoided most sitcoms like the plague, simply because I feel that the form has pretty much reached a creative dead end and nearly all shows within the genre are distinguishable from one another only by name. Yes, there have been exceptions to my ban on sitcoms, most recently and notably SCRUBS and MY NAME IS EARL, but I have otherwise remained steadfast in my stance.

However, during my lengthy run of unemployment a few years back I found myself leaving the TV on for noise while I wrote, tweaked my resume, or cleaned my apartment, and as a result I encountered series that I would otherwise never have seen. Most of them were as disposable as I'd expect (BECKER and THE KING OF QUEENS fall into that category for me), but occasionally I was surprised by a great deal of wit occupying a show that was deceptively "cookie-cutter." I had never heard of YES, DEAR at all during its first four years on CBS — and judging by its spotty ratings history, neither had you — but now, thanks to syndication, I think I've seen every episode and still tune in for some of my favorite episodes. YES, DEAR appeals to me because it's had a number of genuinely hysterical episodes, and the characters are realistically quirky and neurotic enough for me to see bits of myself and several of my friends in them.

But the one sitcom that dominated the airwaves for almost a decade was one that I intentionally steered clear of because everyone I knew thought it was the funniest fucking thing ever aired, and when something achieves such a level of universal popularity I usually strike up an automatic hatred of it, sight unseen, since I usually find such things to be brainless and crafted to give the audience more of the same crap that it has subsisted on for years and grown to depend upon like a junkie and his next spike of horse. So my insta-prejudice kicked into high gear the second that EVERYBODY LOVES RAYMOND hit the airwaves, and I kept my disinterest going strong.

As the years went by and the RAYMOND megalith growed like Topsy, I would try to see what the big deal was but I always saw random snippets and what I saw did not appeal to me at all: Raymond came off as a henpecked pussy, his wife was an intolerable ultra-bitch (verging on the "hard C-word"), his kids were ciphers, his brother was a Frankensteinian crybaby, his dad was a boring misuse of one of my favorite actors (ever see Peter Boyle in JOE? He's like a serious Archie Bunker who's dangerously psychotic and scarier than hell), and his mother was an intrusive pain in the ass to a degree never seen on TV, a repellent factor that reminded me of my own well-meaning but aggravating mom writ large. None of this grabbed me, but then I left the TV on a few months ago and I finally caught a whole episode, and was charmed by the writing and generally excellent performances by the whole cast. Very reluctantly, I would catch the occasional episode, and came like the show quite a bit, but the episode I caught tonight has officially turned me into a fan.

The episode in question is from the show's sixth season (thanks to TV.com for the info) and is entitled "Marie's Sculpture." In a nutshell, Marie — Raymond's mother — joins a sculpture class and crafts an abstract piece. Well, abstract to her anyway, since everyone else stands mesmerized by it, either because they can't quite figure out why they are fascinated by it, or because they realize that it looks like a three-foot vulva, or labia minora if you prefer. 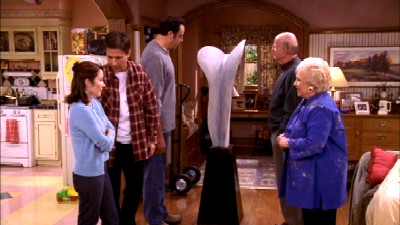 The second it was unveiled, I howled like a madman and chalked it up to my immature/dirty mind, but was then delighted to see that such was the intent of the writer. I won't say any more in case you get a chance to see this one for yourself, but it was really funny, surprisingly tasteful considering the setup, and actually got away with a pussy gag — several, actually — on CBS, the stodgiest of networks. Kudos to all involved, says I.

The only gag that comes close from a sitcom on a supposedly "family" network was a bit from ABC's GRACE UNDER FIRE with Brett Butler; Brett and her pal (the chick who played Cassiday Yates on STAR TREK: DEEP SPACE NINE) attend a women's poetry open mic night, and this crunchy granola/sensible shoes type takes the stage. She breaks into a recitation that consists of bleating "Fish! Fish!," to which Brett observes, "Why do I feel like I'm in a feminine hygiene commercial?," as her pal cracks up. There was barely a titter out of the audience, and I couldn't believe that one made it past the censors onto the Disney-affiliated network.
Posted by Bunche (pop culture ronin) at Wednesday, September 27, 2006

My ELR turning point (I had the same knee jerk distaste for the show) happened one night when I was at a friend's house. An idiotic drunk was there telling the same lame story I'd heard 10-50 times about how he was wronged 20 years ago. ELR was on TV on mute with subtitles. I was reading it and realized it was hilarious. I suspect some of my knee jerking was from growing up in a haven for obnoxious NYC ex-pats. Shame on me.