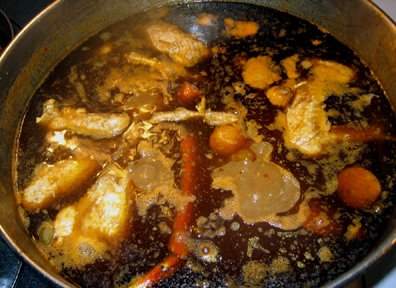 Gumbo, cherished mainstay of Louisiana cuisine and one of the tastiest fucking dishes on the planet. As diverse as the people in the region that spawned it, there are literally dozens — if not hundreds — of ways to prepare a rich pot of gumbo and I have attempted at least seven different varieties only to arrive at my culinary gene-splicing of my favorite variations (chief of which is my mother’s brown roux specialty). Making a good batch of this sacred brew is an art form requiring patience, a knack for “measuring by intuition” and attention to both detail and the slowly simmering elixir, in other words, if you feel that you do not possess these traits, do not attempt this recipe and pass it on to someone who would feel more comfortable with it. If you’re gonna make gumbo, you’ve gotta do it right since gumbo cooking ain’t for the weak. Not scared off? Then let’s get badassed on the bayou! 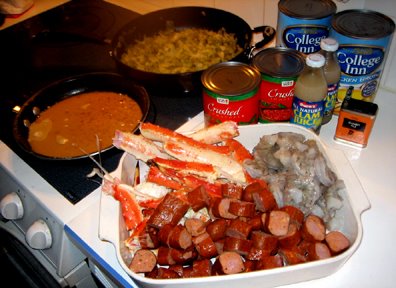 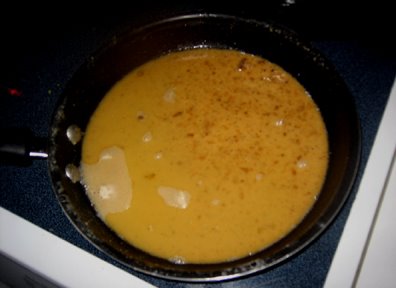 Hail to the might and majesty of the roux!
The foundation of any good batch of the ‘Bo is a heartfelt roux. Roux is a mixture of flour and oil continually stirred over a medium hot flame until the mixture turns a chestnut brown; some prefer a lighter color for their roux but I find that the darker brown provides a headier flavor, but you can do it however you like. Blend the flour and oil slowly with a spatula, and I suggest adding salt and pepper (to taste) to the mix at this point. The roux is finished when it is somewhat pasty in thickness and has reached the shade of brown that floats your boat, but time-wise I usually stay at the stove and stir slowly for about a half-hour/forty-five minutes; this part of the procedure is a great time for functional meditation as you concentrate on the incredibly relaxing Zen of stirring. Also, depending on how much you need for your batch of gumbo, I suggest making a surplus of roux to save on the side. More on this shortly. 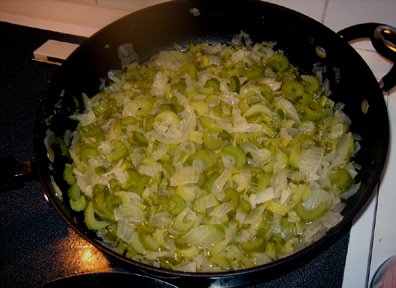 A surfeit of veggie goodness!
Next, chop up as much onion and celery as you may need and sauté in butter or oil until the veggies are somewhat soft. As mentioned previously regarding the roux, you may also want to prepare a surplus of the vegetables so that they can be combined with the surplus roux and frozen for when you may need it again; since making roux is a time-consuming activity you will pat yourself on the back for this time-saving bit of foresightedness when it is needed. 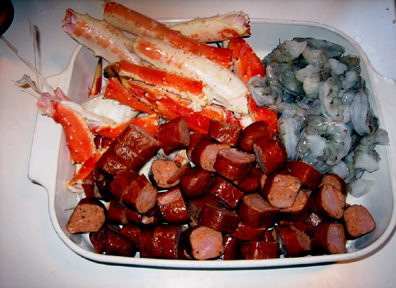 Behold the goodies!
Next, pour the veggies and roux into an eight-quart stock pot and mix thoroughly. Now pour in two quarts (or as much as you feel you may need; remember that much of my method is intuitive) of chicken broth and four Andouille sausages that have been cut into small, coin-shaped sections. NOTE: I recommend adding as much Andouille as possible since it adds a distinct flavor and spiciness to the mix, but keep in mind that the shit ain’t cheap; at my local supermarket they go for around six bucks per pound and that translates into two nine-inch sausages for about five bucks since a two sausage pack never quite equals a full pound. My average batch of gumbo requires at least four Andouille sausages, and in a pinch smoked sausage, Italian sausage and damn near any other sausage will do, but I’m snob for authenticity of flavor.

Bring this lovely mixture to a low boil and add the Dungeness crabs (cleaned of course, and frozen is perfectly fine — for my standard batch I go with three pounds, which comes to around twenty bucks) or Alaskan King Crab Legs, and then the chicken. I recommend wings, legs and thighs over breasts since breasts tend to fall apart into stringy tendrils during a long, slow simmer; it’s still edible, but it’s just nicer to have a piece of solid chicken to sink your teeth into while enjoying the meal. Anyway, pour in one quarter of a bottle of clam juice and we’re off to the races. Once that comes to a boil drop it down to a low simmer, stirring periodically for three hours, taking care not to break up the chicken too much. NOTE: sometimes the roux portion of the mixture may stick to the bottom of the pot so pay attention and don’t let it settle to the bottom for too long.

At the end of the three-hour simmer add at least a pound of fresh, cleaned shrimp to the pot, along with a few shakes of gumbo file; file (pronounced "fee-lay") is ground sassafras which is used to thicken soups and stews, so apply as much as you need for the desired thickness. Let this boil for another five minutes and remove from heat. That’s it. You have now made a pot of gumbo.

I recommend making this the day before you intend to serve it since, much like almost any dish, the gumbo finds its flavor overnight, just make sure that it has fully cooled before putting it in the fridge. And for those who want more of a kick to the flavor, feel free to add whatever kind of hot sauce you like later, though thanks to the Andouille you probably won’t need to.
Posted by Bunche (pop culture ronin) at Saturday, September 23, 2006