One of the many things that suck about being a descendant of a mostly close-mouthed family governed by an emotionally oppressive southern matriachy is the paucity of documented evidence about our ancestors and their stories, tales that have slipped through the cracks of history because "we didn't talk about those things." What little that I have been able to glean of the history of my mom's side of the family mostly goes back as far as the late 1880's/very early 1900's, much of that is piecemeal at best, and considering the horrors contained in much of it I can't honestly say I'm surprised by little of this lore being passed down. Fortunately photgraphy was around at the time, so in some cases I am able to attach a face to some snippet of my family's painful minutia.

My maternal grandmother gave up the ghost just after Thanksgiving in 1988 and when my mom traveled back to Alabama to settle her mother's estate, she returned with many artifacts of her mother's, including the one photograph known to exist of my great-grandfather, Liggon James. (see below) 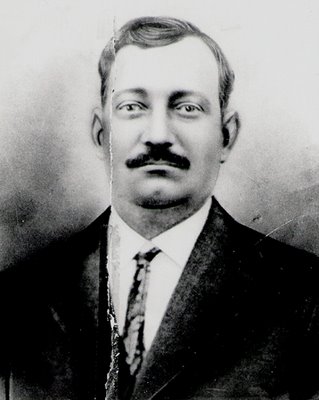 I was already very much aware of the genetic stew that makes up my lineage, but I was taken aback when I saw the image of my great-grandfather. Here was a dude who looked like he could have been the guy they used as the model for the cartoon character found on the Pringle's New-Fangled Potato Chips container, in other words, he looked like a quaint "gay nineties" white guy. When I asked my mother about it, she related to me what little history about Liggon that she could recall (he died when she was very young).

As previously stated, my mom's family was basically a matriarchy, but that bastion of strong women was founded by my great-grandfather. You see, his mother was a freed slave whose name has been lost to time and when she was a young woman in the 1870's she worked in the home of a white employer as a housekeeper. According to what my mother was told, during her time there my great-great-grandmother was raped by her employer and Liggon was the unwanted result. When he was old enough to understand why he looked quite unlike the other kids, Liggon was told of how he came to be and from that point on he firmly defined himself as Black with a capital B, and when he was old enough to start a family he made sure that each of his many daughters got a college education so they would never have to endure what his mother went through.

Other than the story of his origin, the only remaining Liggon tale that my mom related to me was of how he held a well-paying job as a foreman of a construction company, and at the company's main office there was one of those stores where employees could buy all manner of goods for greatly reduced prices. When Liggon's very dark-skinned wife, Saveda, arrived one day to shop, one of the company executives took Liggon aside and said, "Look, we all love our nigger whores, but for Christ's sake, we don't bring 'em to work!" When Liggon informed the guy that this was no "nigger whore" but his wife, the executive flipped out because that was the first time he realized that my great-grandfather was not exactly a white man. Shortly thereafter, Liggon was drastically demoted in position, but he didn't give a shit because he had already saved a lot of money and therefore there was nothing that could really be done about it. Take THAT, you cracker pricks!!!
Posted by Bunche (pop culture ronin) at Tuesday, September 19, 2006

Labels: WE ARE FAMILY

wonderful story! so glad you were able to learn some of your history -- and btw, that dude looks like you!