SOME HIGHLIGHTS FROM LISZTOMANIA (1975) 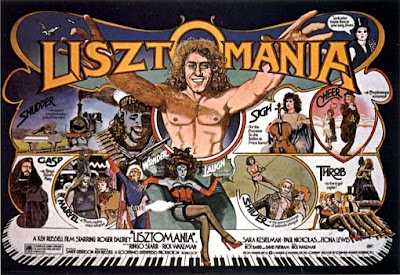 After recently reading a biography and overview of the works of British director Ken Russell , I was consumed with a longing to once more sit through my favorite of his loony filmic catalogue, the much-maligned LISZTOMANIA (1975), but after some research I found out that it's not available on DVD in the States. Luckily for me I know of a terrific source for "gray market" DVDs, and they had the film, albeit a transfer from a pan-and-scan VHS tape, so I watched it again and laughed my ass off with — and at — its glorious and schoolboy-vulgar excesses.

Playing fast and loose with the life of classical composer Franz Liszt, LISZTOMANIA is a cornucopia of visual insanity and extremely questionable taste featuring a shitload of stuff that will either offend or amuse the moviegoer. I mean, how can you not love something as ludicrous as Ringo Starr playing the Pope? 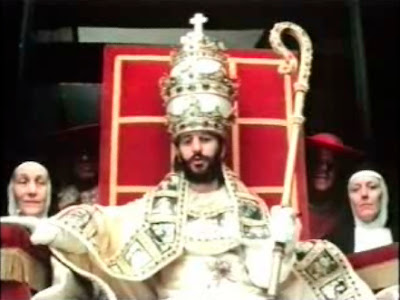 Or how about Yes keyboardist (and the film's scorer) Rick Wakeman as Wagner's Sigfried in a Marvel Comics Thor getup? 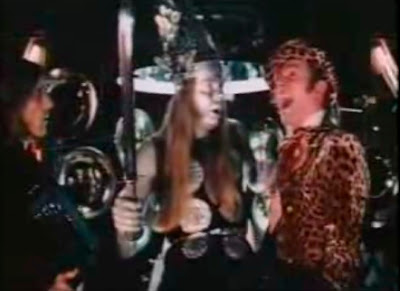 And, speaking of things Wagnerian, how about the buck-nekkid Rhine Maidens worshipping Das Rheingold that happens to looked like a huge, gold-tipped dick? 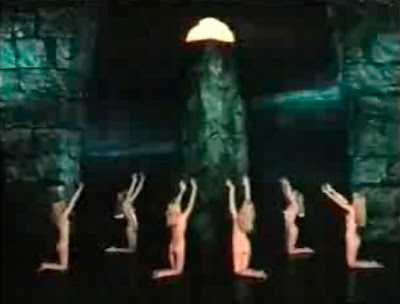 That's pretty good, but LISZTOMANIA is infamous for a much more outrageous bit of phallic folderol.

During the course of the story, Franz Liszt — played by the donkey-faced frontman for the Who, Roger Daltrey — symbolically sacrifices his womanizing ways for the patronage of Princess Carolyn (Sarah Kesselman). The princess greets him in a room supported by gilded dick-pillars, 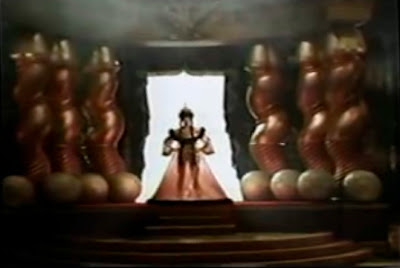 and once he agrees to the bargain things go balls-out Russellian and in no time Liszt, in a dress no less, gets sucked up the princess' vagina by wind-tunnel-velocity gusts. 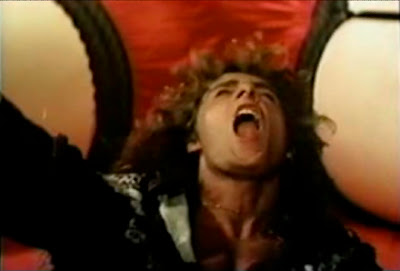 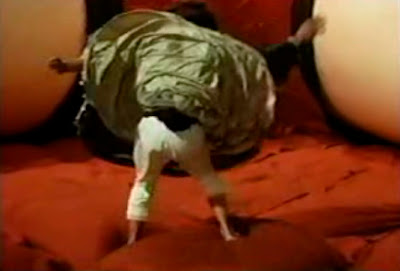 Once inside this titanic pussy, Liszt is assaulted by a chorus line of former lovers, each decked out in goofy burlesque costumes. 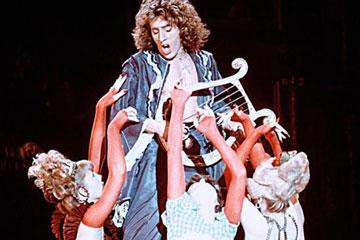 The girls tear and claw at Liszt, who whips a harp from out of nowhere and goes into his "Orpheus" schtick, a move that soothes their savage breasts and inspires them to summon out his trouser snake with a sweet siren's song. Their lilting calls yield totally unexpected results as Liszt's member expands and expands, 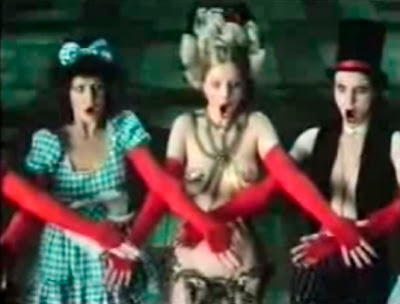 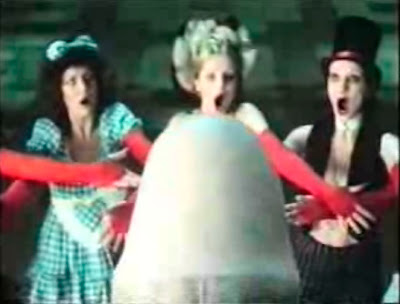 finally ending up at a length of about ten feet. 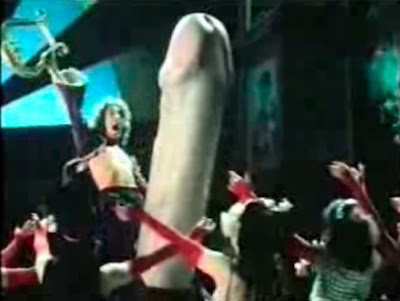 As rinky-dinky "pee-anny" music blares on the soundtrack, Liszt cackles like a fucking madman and proudly slaps his monstrous bacon bazooka in time to the music, occasionally treating the stunned audience to the old "fist-up" erection gesture.

He then kindly gives the ladies a ride on the mighty baloney pony, 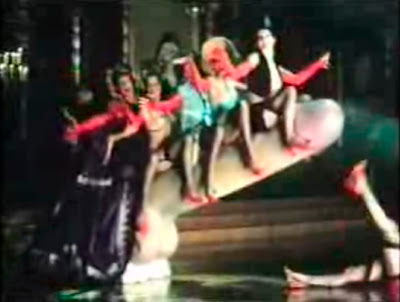 after which the choreography changes gears and turns into a phallocentric Busby Berkely number wherein Liszt bobs his pecker up and down between the legs of his spread-eagled harem, 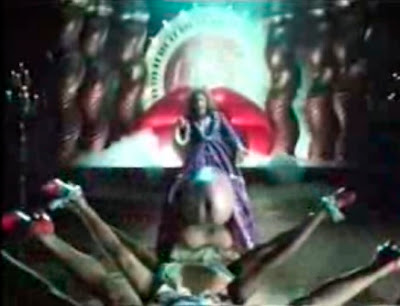 before obligingly letting the women dance a merry maypole around his engorged man-root. 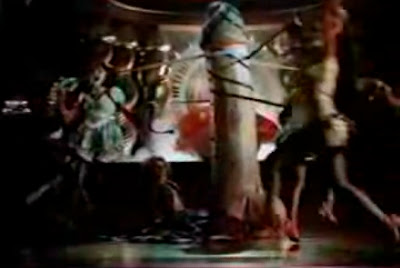 But all good things must eventually come to an end, and the girls use the maypole ribbons to drag a loudly-protesting Liszt to a guillotine wherein his kielbasa will be sacrificed, the pillory through which his behemoth boner will be thrust framed by the splayed thighs of a now demonic and bat-winged Princess Carolyn (I particularly like the inverted crucifix pasted to her crotch). 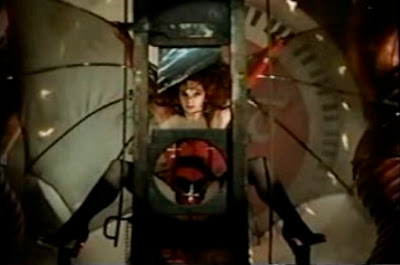 It's a pretty delirious sequence, but it pales in comparison to the film's finale.

By the time the film's nearly over, all sorts of crazy shit has happened, but of greatest importance to the "plot" is how the stylistic influences vampirized from Liszt by Richard Wagner lead to the creation of Nazism, personified by a risen-from-the-grave Frankenstein/Wagner/Hitler who not only looks ridiculous but also packs a combination machine gun/electric guitar.

aided by apple-cheeked Aryan youth in Superman costumes while he blows away klesmer-music-accompanied Jews, Liszt is in heaven, residing in a huge pipe organ with all of the significant women from his earthly existence, even his daughter, Cosima, who was depicted as killing him with a voodoo doll (don't ask). 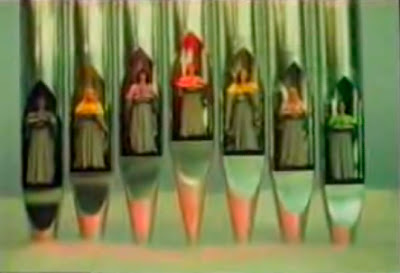 After Liszt and the ladies play a soothing classical number, their moment of peace is interrupted by all of them noticing Frankenstein/Wagner/Hitler's heinous deeds. Liszt figures it's up to him and the ladies to fly to Earth and kick Frankenstein/Wagner/Hitler's ass, so we then find out that their pipe organ-cum-love-shack is actually a spaceship with dime-store angel wings, 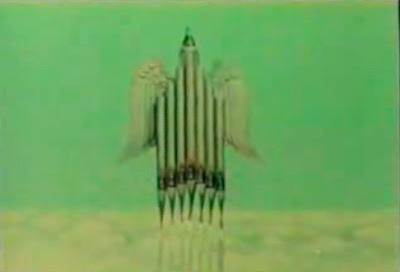 which Liszt swiftly pilots to a ravaged Germany. 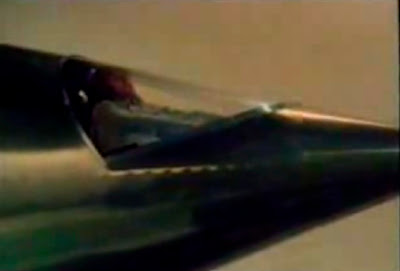 Once there, he sends the ship into a nosedive, 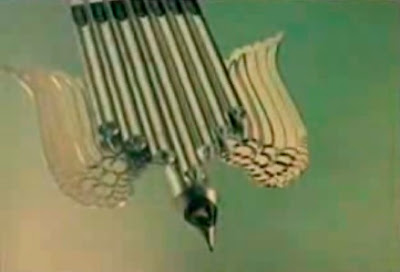 and blows up Frankenstein/Wagner/Hitler with rainbow-colored/psychedelic laser beams. Once the day is saved, Liszt pilots his ship into deep space, toward Heaven or who the fuck knows where, or for what purpose. THE END. 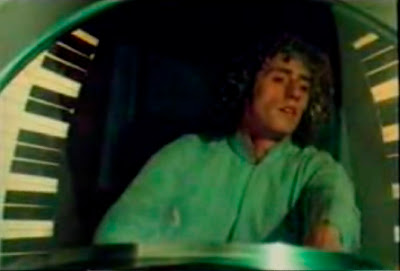 Sure there are some slow-moving moments in the flick — it can't all be gigantic cocks, Nazi vampires, Frankenstein/Wagner/Hitlers, and naked chicks with big boobs...or can it? — but now don't you wanna see LISZTOMANIA for yourself? It's not for all tastes, but how can you not give it up for the sheer, glorious insanity that is Frankenstein/Wagner/Hitler? I couldn't have come up with that one even if I were savagely dosed-up on tequila and cheap, Mexican cough syrup, and that's saying something!

Next you'll have to do LET MY PUPPETS COME (I have a copy if you need)...

Liztomania, like Zardoz, is truly a relic of the early 1970s. In no way would a major studio ever put money behind something this utterly lunatic, sexually explicit and dementedly perverse again. I thought it was one of the funniest movies I've ever seen, and applaud it for its sheer drug-addled audacity. Thanks for sharing this lost masterpiece with the tribe! :)

Giant cock, ok. Hitler villain, fine. Pipe organ-spaceship, sure. But how is it that Daltry's old lovers are in the princess vagina? For that matter, how does the princess get into her own vagina? I'm kidding. It all makes perfect sense in Ringo-Pope world.