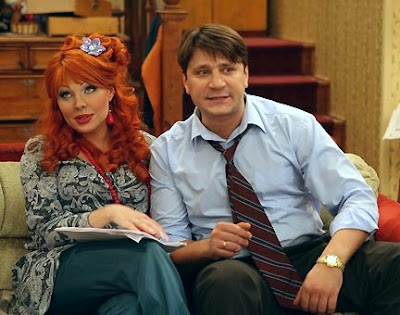 I turned on NY1 News this morning for the weather forecast and found myself transported to a mirror universe. There, in the "In the Papers" segment read by laid0back and snarky Canadian expatriate Pat Kiernan, was a photo from an article in today's New York Times of two characters who were obviously Peg and Al Bundy of TV's late, lamented MARRIED WITH CHILDREN (1987-1997), but just as obviously not embodied by Katey Sagal and Ed O'Neill. It turned out to be a shot from “Schastlivy Vmeste (Счастливы вместе)"” or “Happy Together,” the authorized Russian remake of the classic Fox sitcom, one of the cornerstones upon which was built what became the fourth American televison network.

Having greatly enjoyed the original for its looney humor and refreshing avalanche of bad taste, I was intrigued to see this, of all American TV shows, get a Russian makeover. According to the Times there are also Russkie re-do's of WHO THE BOSS? and THE NANNY, but fuck those shows in the ear; they were both fairly innocuous and therefore no threat to anyone, but the idea of the Bundys taking the Russian airwaves by storm, with the program's content virtually unchanged, is nothing short of amazing to me, a guy who was a kid during the tail-end of the Cold War and was lead to believe the Russians were stone-faced, humorless drones in a society where everyone waited on line for three weeks to get four sheets of corrugated cardboard for use as toilet paper, shifts at the local salt mine lasted for twenty-two hours per day, Adam West's Batman had been declared a glorification of a fascist murderer by PRAVDA — I shit you not — listening to the Beatles could get you executed while your female relatives of all ages were sold to the field brothels of the Siberian front, and happiness was outlawed for all save bloated, vodka-swilling beaurocrats who had names like Nikita and Leonid. Shit, the only Russians Americans trusted were STAR TREK's Pavel Chekov, 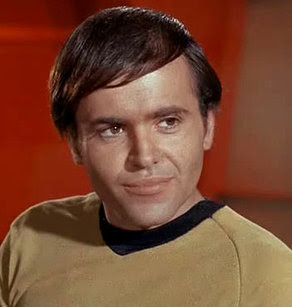 and the blonde half of the Men From U.N.C.L.E., Ilya Kuryakin, 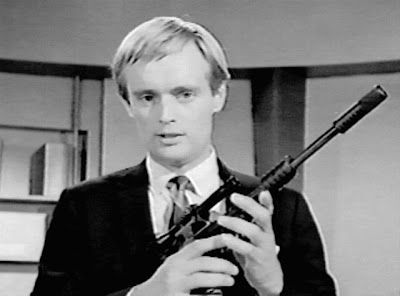 both of whom were fictional characters created by Americans.

But now our former enemies are no longer so strange and foreboding to us, and it was only a matter of time before good old Yankee cultural influences could run rampant and corrupt the living shit out of the people of Mother Russia without the threat of a bullet through the fur cap. But who could have possibly foreseen a knock-off of MARRIED WITH CHILDREN becoming the top show on Russian tellevison? Not me, that's for damned sure.

From what I've read Счастливы вместе is the same show as the original, only with the Chicago setting relocated to a town called Yekaterinburg, and all of the main characters from the show's first four years are present. Kelly and Bud are now Sveta and Roma, respectively, 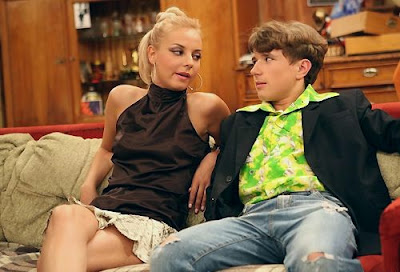 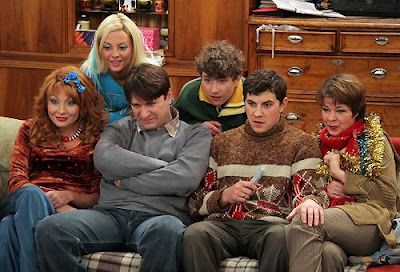 I would love to see a couple of episodes of Счастливы вместе, especially when they get around to remaking the infamous story with the camping trip where all of the women are having their periods, a state that wreaks havoc on the menfolk, particularly Al, thanks to Peggy's already amped-up (and long-neglected) sexual needs going through the roof. 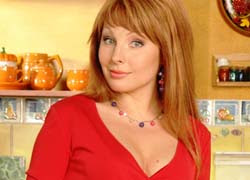 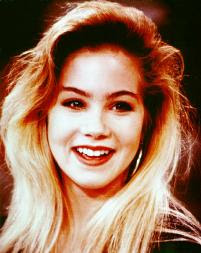 Kelly "Pumpkin" Bundy, sweetly cute in spite of herself.

Darbya Sagalova's Sveta, on the other hand, looks fantastically sleazy and jaded, just like the girl you remember from high school who always looked hungover and well-used, complete with questionable stains on her denim jacket. 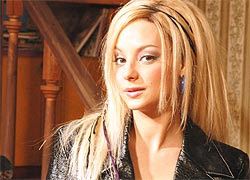 You can't tell me that this version of the character doesn't look like she's about two beers away from shooting an amateur tenderloin video on a dingy matress in somebody's basement, maybe even with a Great Dane involved.

So send an email to the Fox Network requesting an hour-long special showcasing Счастливы вместе, possibly hosted by the cast of MARRIED WITH CHILDREN. It would be fun to see, and it would hopefully pre-empt another episode of the unwatchable THE WAR AT HOME, 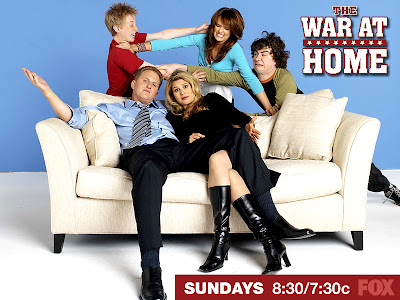 or the almost as bad 'TIL DEATH, 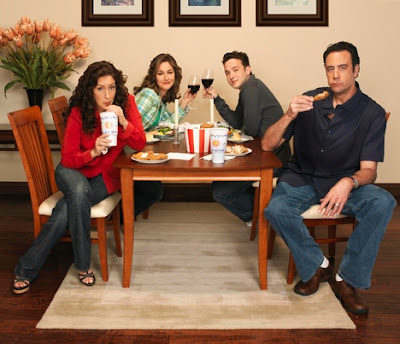 both shows that would never exist if MARRIED WITH CHILDREN hadn't set the template for humorous familial dysfunction two decades ago and had the common decency to actually be funny.
Posted by Bunche (pop culture ronin) at Monday, September 10, 2007

Trouble is, the FOX Network that aired Married With Children, The X-Files, The Simpsons, In Living Color and other subversive comedies is not the Fox Network that now exists. That network was bought out by Rupert Murdoch, the right-wing scumbag who turned Fox News into the neocon vomitfest is is today - the network that very well may have set Firefly up to fail because of its distinctly subversive politics. That network continues to air The Simpsons because it depends on that show for a huge chunk of revenue. These days, though, Fox is a gutless right-wing shitshop dedicated to maintaining, not upending, The Good 'Ol American Way.

Right, I was going to say that I'd write to FOX if I were willing to admit they exist. Shitshop, hee.

Well, I'm russian. I'm also a fan of the original series. And I have to say: that remake is no good in comparison. Sure, it has some jokes. But the overall tone is so much different - I didn't bother to see any more than a few episodes. For instance, the running gag about Al's avoiding sex with the wife as much as possible is skipped altogether. I don't even want to elaborate - the show's a bad remake imho. Kinda dull.

On the other hand, with The Nanny situation seems to be exactly reversed. I've never heard anything particularly good about the original (albeit I've never seen an episode, so I'm not judging), the remake is quite good (not good good, but a cheap laugh good:) and very popular.

Here's some ratings for comparison (not sure about the date):
Lost 13.2
Моя прекрасная няня (The Nanny remake) 7.0
Счастливы вместе (MwC remake) 2.0