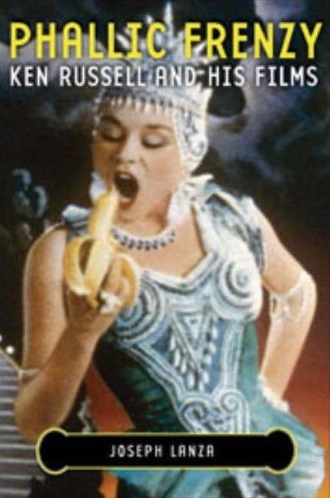 Those of you who know me as a real-life entity and not just a disembodied Internet blogger loon would probably think that my favorite film director of all time would be the late Akira Kurosawa, crafter of such masterpieces as THRONE OF BLOOD (1957), IKIRU (1952), RED BEARD (1965), and SEVEN SAMURAI (1954), a film that many consider to be the single best movie ever made anywhere by anyone. Well, I do love me some Kurosawa and happen to think he's perhaps the finest all-around filmmaker ever to set foot behind the camera, but he is not the director whose particular signature vision I hold most dear. That honor goes to Britain's Ken Russell, an artist whose work polarizes viewers into two camps of thought: either you really love the guy's fevered forays into celluloid excess, or you hate his work with a passion usually reserved for child molesters and rapists. 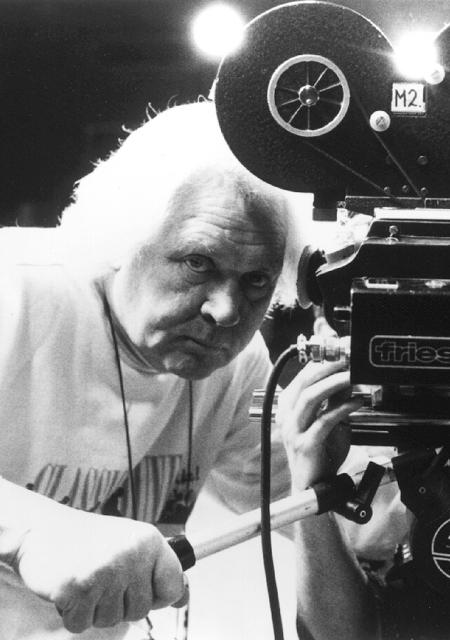 My own first exposure to his body of work occurred in 1975 during the waning days of my parents' marriage, when I begged them to take me to see the film version of the Who's seminal rock opera TOMMY (ironically a story driven by family dysfunction and emotional torment that turned out to be the last movie we saw together as a family). 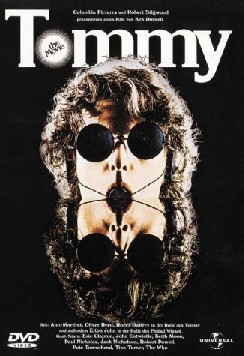 I knew nothing of Russell's already infamous status in the film biz as a creator who allowed an unbridled id to run rampant across the screen, I was just a kid who liked the Who and was hooked by the colorful TV commercials for the film, so I was in no way prepared for the visual assault that befell me and my gobsmacked parents when we saw TOMMY at downtown Westport's now-defunct Fine Arts theater. An aggressive and cacophonous hallucination put on film, TOMMY spewed forth garish colors and sets — to say nothing of the baked beans, liquid chocolate, and detergent suds that inundate Ann-Margret as she writhes about on the floor at one point — 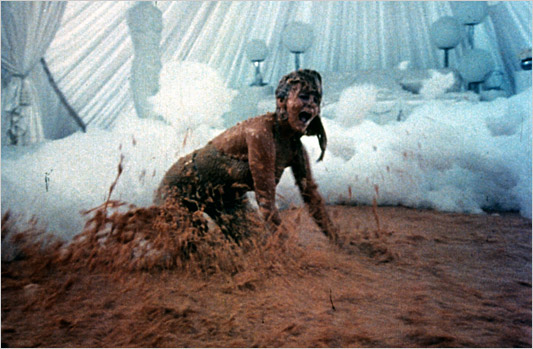 My parents and I left the theater shell-shocked, and while mom and dad complained bitterly about having to sit through “that mess,” I was enthralled with the thought that a major motion picture could be so fucking balls-out bizarre. TOMMY was beautifully shot and colorful as a motherfucker, sort of like an MGM musical from the late 1940’s with a lysergic edge, and it reminded me of a live-action animated cartoon. At that point in my life I had only recently twigged to films having directors and not just being rolled out whole from a studio, and I decided to keep an eye out for any subsequent films from this “Ken Russell.” Sadly, my mom refused to take me to see the R-rated LISZTOMANIA (also from 1975) since it bore the dreaded "No one under seventeen admitted without parent or guardian" age restriction and also had an ad campaign that announced it was from the same director as TOMMY, a statement that to my mother may as well have said, “Free punch in the face with every admission.” As a result I didn’t see another Russell film until ALTERED STATES (1980), by which time he still packed a visual punch but his legendary madness-as-cinema was considerably neutered by the oppressive and contractually-guaranteed script approvals of screenwriter Paddy (NETWORK) Chayefsky, as well as being hampered by working within the Hollywood system, an anti-creativity maelstrom if ever there was one.

Over the years I have seen many of Russell’s movies and count two of them among my top fifty favorites of all time — namely THE DEVILS (1971), with it’s fantastically blasphemous and recently restored “rape of Christ” sequence, and the aforementioned LISZTOMANIA, which pretty much everyone else who's seen it absolutely fucking despises — and have for a long time sought to get my hands on a decent book on Russell that combines biography with a fair critical overview of his frequently misunderstood output. I’m glad to say that Joseph Lanza’s PHALLIC FRENZY: KEN RUSSELL AND HIS FILMS is exactly what I was looking for, and it strikes the perfect balance between a scholarly film tome and a thoroughly entertaining, warts-and-all look at an artist consumed by high culture, religious fanaticism — Russell, a crazed Catholic? What a shock! — an overwhelming need to shock the living shit out of the oh-so-staid British and anyone else within range, and a lifelong obsession with huge, serpentine dicks. 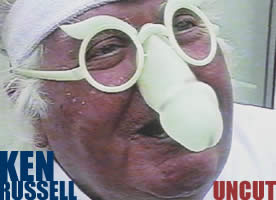 PHALLIC FRENZY covers Russell’s entire life and career to date, revealing a cultured vulgarian whose often garish, offensive, and ostentatious cinematic landscape sweated, thrashed, bled, cursed, and ejaculated like the conceptual offspring of Breughel and H.R. Giger after a tequila-and-psilocybin-gorged weekend with Willy Wonka. His visual playing field is crammed with in-jokes, heavy-handed symbolism, social satire, and all manner of beautifully framed non sequiturs, a style memorably lampooned on MONTY PYTHON’S FLYING CIRCUS in an alleged film clip from “Ken Russell’s GARDENING CLUB (1958),” in which, for no apparent reason… well, maybe I’d better let the sketch speak for itself:


Strange though it is, that bit is a fair approximation of a typical Ken Russell moment, only shot on a budget of about $200 bucks that went entirely toward the pantomime goose outfit and a couple of Viking helmets.

So if you have any interest in Russell and his rise, fall, stroke, and subsequent shot-on-camera opuses — such as HOT PANTS: 3 SEXY SHORTS (2006) which includes THE REVENGE OF THE ELEPHANT MAN, and THE FALL OF THE LOUSE OF USHER (2001), in which a rainbow-colored Slinky is “a penis attached to the ancient Egyptian god Osiris, who has been summoned in a séance to help solve Edgar Allen Poe Mysteries” (no, I did not make that up) — then I urge you to check out PHALLIC FRENZY.

However, my one complaint about the book is that its photos are too small and in black & white, and as anyone who’s ever seen a Ken Russell movie will tell you, the shit should been seen as large as possible, with every chrome-plated, candy-hued composition in thoroughly unnatural color. But fuck that. Read the bastard anyway. 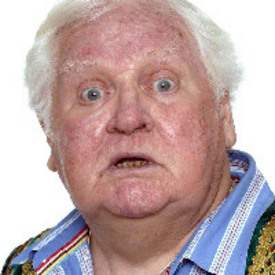 Excellent article. Russell is also my favorite director. He's my Kubrick. He's a genius and completely misunderstood. The book is invaluable, if anything because it is the only up-to-date work on him since 1984. That picture of him at the end has got to go though... There are certainly more flattering pictures of him.