When MYSTERY SCIENCE THEATER 3000 was cancelled some eight years ago, it left a void in the realm of genuinely funny television and broke the hearts of bad movie fans everywhere who tuned in each week to see a guy and two wise-assed (and incredibly phony) robots talk through and lambaste whatever wretched hunk of celluloid detritus was foisted upon them by the evil mad scientists who sought to wear them down via endless doses of outright crap.

Created by and originally starring Joel Hodgson as the lone human stranded on a space station — "the Satellite of Love," or more appropriately the "S.O.L." ("Shit Outta Luck") — the series swiftly amassed a huge cult following for its merciless wit, rapid fire commentary, and the truly terrible movies it rescued from the forgotten depths of cinematic obscurity. Aided and abetted by Crow T. Robot, Tom Servo — perhaps the gayest robot in science fiction history — and sometimes the borderline-retarded Gypsy, Joel (and later Michael J. Nelson) shared the misery and influenced a generation to talk back to the screen, a phenomenon once the trademark of inner city blacks and Hispanics, now disseminated to the easily corrupted youth of suburbia. 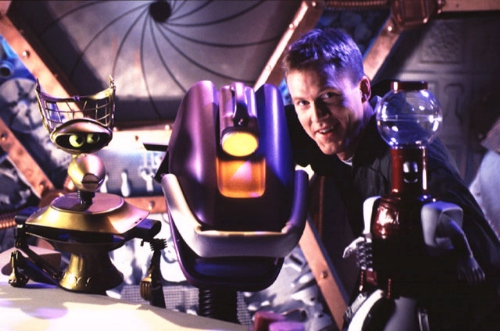 The crew of the S.O.L. during the Mike Nelson years. L to R: Crow, Gypsy, Mike and the incomparable Tom Servo.

MST3K was also the first place that many novice bad movie-watchers encountered such atrocities as TIME CHASERS, an unintentionally hilarious no-budget Canadian sci-fi flick about a time traveling prop plane, OPERATION DOUBLE 007, the most shameless James Bond ripoff ever made thanks to it featuring many of the regulars from the actual 007 franchise and starring Sean Connery's talent-free younger brother Neil, K. Gordon Murray's south-of-the-border kiddie flick nightmare SANTA CLAUS, and the infamous MANOS: THE HANDS OF FATE, considered by many who've seen it to be the single worst film ever made, so when the show left the air where was the rabid fan base supposed to go for their fix, an addiction that had been fed, on one network or another, for the next ten years?

The reruns on the Sci-Fi channel only lasted for a short time and did not include the seasons that ran on Comedy Central, but eventually MST3K was made available on VHS and DVD by Rhino, a happy happenstance that is now up to its eleventh boxed set. But what are the minds behind the show doing lately, you may ask? Well, kiddiewinkies, lemme tell ya about THE FILM CREW.

Comprised of Mike Nelson, Kevin Murphy — the second and best voice of Tom Servo, as well as playing Professor Bobo the gorilla — and Bill Corbett — second voice of Crow and the actor responsible for Observer, aka "Brain Guy" — The Film Crew is virtually the same concept and format as MST3K, only minus the outer space setting, silhouettes of theater seats and the (literally) captive audience, a wise move that adheres to the old adage "if it ain't broke, don't fix it." Instead of the S.O.L., the setting is a studio where the guys are employed to record audio commentary for the worst films ever made, and the lack of any attempt at a plot other than the riffing is a welcome retooling, although there are two minor quibbles: on MST3K the non-movie segments featured skits and musical numbers that were sometimes funny as hell, but were more often than not would-be-clever filler until the movie and heckling resumed, and the offerings found on the Film Crew DVD's are examples of the filler sketch at its most laugh-free. That's a disappointment since the people involved prove themselves to be geniuses of off the cuff rejoinders, but their scripted material is best skipped. Also the new material has more of a raunchy slant that moves the show toward the far borders of "family friendly," and while the original didn't shy away from the occasional phallic gag or mildly smutty wordplay, the risque content found here lacks any form of subtlety.

As for the movies themselves, I've only seen the first two in the series, namely HOLLYWOOD AFTER MIDNIGHT, and KILLERS FROM SPACE, but both were exactly what I expected from a thinly disguised MST3K. 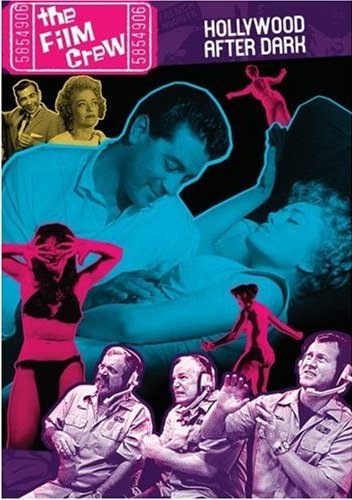 Originally released as WALK THE ANGRY BEACH — what the fuck kind of title is that??? — HOLLYWOOD AFTER DARK is listed on the Internet Movie database as being from 1968, but I find that hard to swallow since it's in black and white and looks for all the world like it was shot sometime around 1961 or 1962, it's pre-Beatles soundtrack of sleazy burlesque music being a dead giveaway. The paltry exploitation flick revolves around a junkyard owner whose military skills at "underwater demolition" are blackmailed into the service of a local mobster/burlesque club owner, and while under the thumb of the mobster the sap falls in love with a none-too-savvy stripper who came to Hollywood to make it in the movies, and therein lies the sole reason why this film has not remained buried in the mists of bad movie limbo. The stripper is played by a relatively young Rue McClanahan, best known to TV watchers as Blanche from the 1985-1992 NBC sitcom THE GOLDEN GIRLS, and she looked pretty long in the tooth even back then, so any titillation that may have been intended savagely misfires, a point repeatedly driven home by the commentary. Violence, crime, gratuitous and tedious burlesque performances, and a confusing rape scene send this flick straight down the bowl and into the motion picture septic tank.

Up next is KILLERS FROM SPACE, a sci-fi train wreck from 1954 that also happens to be one of the very first films I remember seeing as a five or six-year-old. 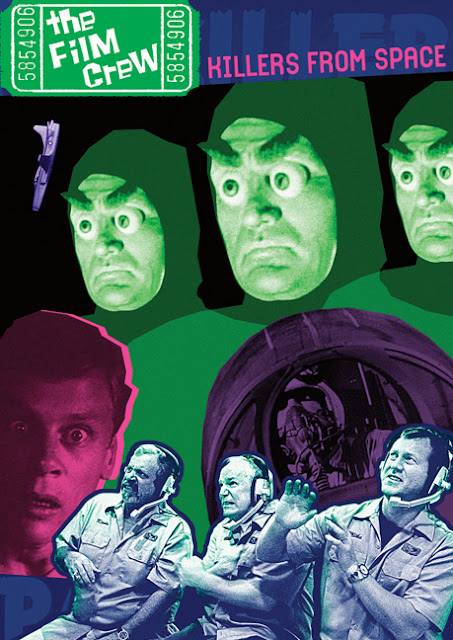 It's a really bad, zero budget turdstorm about invaders from another planet who want to wipe out all life on Earth so they can move in once they leave their dying home planet. There's no suspense, no special effects to speak of — unless you bother to consider the use of optically enlarged and thoroughly unconvincing tarantulas, assorted lizards, and cockroaches — 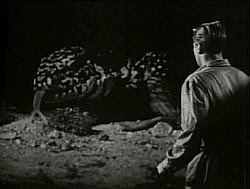 and there's also the turgid presence of a pre-MISSION: IMPOSSIBLE Peter Graves to be endured, but the thing that cemented the movie's place in the memory of bad movie-lovers is the look of the extraterrestrials. I mean, check this shit out: 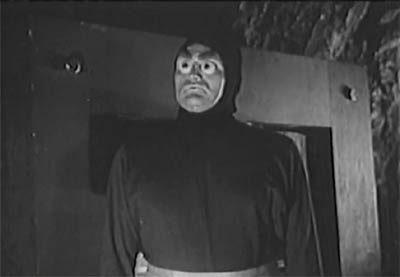 Did anyone actually find those Cookie Monster eyeballs scary? I guess somebody must have, because they were featured prominently in the film's original ad campaign: 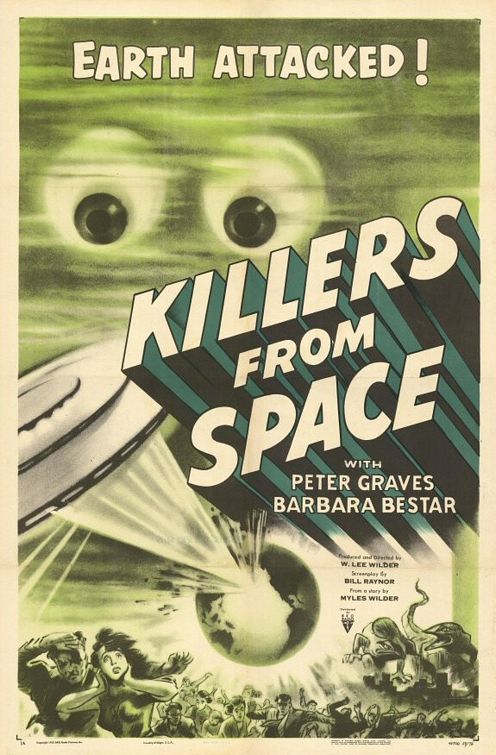 Slow-moving, stupid beyond all reason, wall-to-wall with atrocious acting and dialogue, and featuring one of the most feeble endings on record, KILLERS FROM SPACE is balls-out lousy, but it must be seen to be disbelieved. It's amusing enough on its own, but in the capable hands of The Film Crew it's elevated to a new level of idiocy.

I very much enjoyed the first two outings in THE FILM CREW and have already ordered the next installment, WILD WOMEN OF WONGO, based on how entertained I was by the sort-of return of MYSTERY SCIENCE THEATER 3000. If you loved the original you'll get a kick out of the next generation, and I have faith that we'll soon see it reach the heights (or is that depths?) of such classics as the gang's savaging of THE MAGIC SWORD, SANTA CLAUS CONQUERS THE MARTIANS, and the immortal MITCHELL.

"Houston. Houston. How do you copy?"
"On a Xerox machine. How about you?"