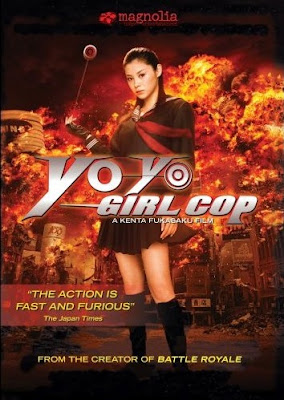 The Japanese have yet again rebooted a classic superhero franchise and I'm glad to say that for once the reboot doesn't suck ass.

YO-YO GIRL COP is the latest incarnation of SUKEBAN DEKA (basically "Delinquent Girl Cop"), a series that began as a manga — no surprise there — in 1976, running for six years and originally collected in twenty-two volumes. 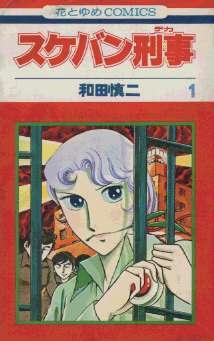 The manga that got the ball — or yo-yo, if you will — rolling.

From there it made the leap to live-action TV in 1985 where it became the archetype of the badass schoolgirl genre for that generation.

The concept is pretty simple: a badass delinquent schoolgirl in one of those pedophile's dream sailor suits/school uniforms gets press-ganged into service as an undercover agent for the government, is issued a metal yo-yo equipped with blades and a string of seemingly limitless length, is insinuated into the school system with the fabricated identity of "Saki Asamiya," and turned loose to kick motherfucking ass on other high school delinquents and assorted menaces to Japanese society. Sure it sounds totally fucking stupid to send a teenager to face armed felons and martial-arts-proficient sociopaths, and it is, but would you expect some demure-looking little schoolie to split your head in half with a razor-edged children's toy while you attempted to mastermind a schoolyard heroin ring? That's some fucked-up logic that you just can't argue with, Jack!

The original Saki Asamiya was played by Yuki Saito in the first SUKEBAN DEKA TV series, and once she departed the character's name was passed on to subsequent badasses in series two and three, sort of like a Dread Pirate Roberts in a dress. 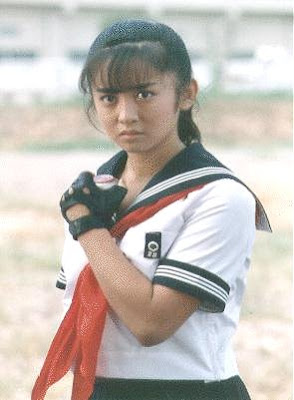 Despite a considerable interest in Japanese action madness, even back in those days, I never heard of the whole SUKEBAN DEKA thing until SUKEBAN DEKA II came out and received saturation advertising during episodes of FIST OF THE NORTH STAR when that series originally aired; while in college I obtained brand new untranslated TV shows taped off the Japanese airwaves for two years from a place called Tokyo Video in Manhattan, and since these tapes contained four half hour installments of any given show it was a certainty to see the same ads repeated in the same space with each weekly chapter. So when my equally stoned pals and I would blaze up the bong and check out these brand new and ludicrously violent shows, we had no fucking clue as to what much of the shows being advertised were about. Even promos for American films that we'd already seen were rendered incomprehensible by bizarre editing and the hyperactive histrionics of the various announcers, so when we saw the teasers for the then-upcoming SUKEBAN DEKA II we were absolutely gobsmacked by the weirdness.

As Kenshiro put his foot through some post-apocalyptic bad guy's head — literally — and FIST OF THE NORTH STAR would go to a commercial break, the screen was suddenly filled with a strange live-action shot of a high school girl in full uniform standing atop a cliff as the ocean waves crashed at her feet. Then a female voice would shout, "Sukeban Deka Two!!!," which was blurted out with such rapidity that it sounded like one word, kind of like, "skubbondeckatoo." Then the camera would zoom in on the girl's head at breakneck speed, revealing her to be wearing a full-head iron mask that was then split in half by a big-assed yo-yo to display part of her face. 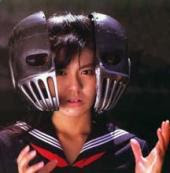 I have no idea what the fuck that was all about, but as this ad became familiar to me and the rest of the stoner crew we supplied our own English-language voice-overs, the most common of which was, "Tonight! On IRON MASK FACE!!!"

But it wasn't until the early 1990's that I actually got to see one of the actual SUKEBAN DEKA shows and the first feature film based on it, and I thoroughly enjoyed the show's manic and downright nutso energy, while the film kind of plodded along, being memorable only for a scene where the heroine took down a full-armed assault helicopter with her trusty yo-yo. And after that there was a truly sub-par straight-to-home-video animated version that completely sucked, so the less said about that the better. But now, after an absence of some sixteen years, SUKEBAN DEKA is back and better than it has been since the original TV show. 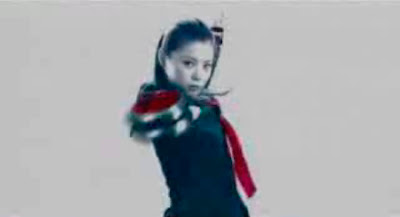 The new film is a direct sequel to the first series insomuch as the new Saki Asamiya is the seventeen-year-old daughter of the original — Yuki Saito even shows up for a cameo as the character — and is very bit the bad motherfucker that her mom was. But it seems that after her glory days as a high school superheroine the original Saki strayed from the path of righteousness and descended into a booze-drenched life of violence and poor choices in men, a lifestyle that lands her on death row after fleeing Japan for New York City. There she raised her daughter as a (presumably) single mother in a dump of an apartment — the most realistic thing in the entire film — while her kid runs around the streets at night getting into fights and developing hardcore martial skills as a by-product.

Meanwhile, in Japan, disenfranchised high school students have been blowing themselves up in public places with clusters of dynamite for reasons that remain obscure to the authorities — are the kids terrorists? — so when all looks hopeless they decide to revive the Sukeban Deka branch and haul our young heroine from New York back to Japan where she's given the Saki Asamiya cover — complete with a hot new garter belt holster for her yo-yo —

and three days to figure out just what the fuck is going on; the cops know that something big is going to happen at the end of the seventy-two hour period and they seek to stop it before more innocent lives are lost, and Saki must solve the mystery within that time frame or her mother will be executed back in New York.

What follows is the usual "new girl in school" story where the loner is given a lot of shit by the popular girl (gee, could she be a yo-yo-toting badass who works for the bad guys?) and befriends the school's number one misfit, but it's handled a lot better than most other entries in this genre, with frequent outbreaks of martial arts ass-whuppin' thrown in for good measure. 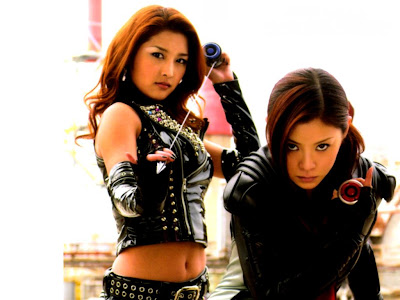 Evil popular girl, and the new kid in town.
The script's pretty good too, actually giving us insight into Saki's anger and what drives her delinquency while not boring us in the process. But don't kid yourself; this ain't Dostoyevsky and it's pretty family-friendly, maybe a slightly strong PG, or a decent PG-13...that is unless you watch it with the subtitles. You get the option to watch it in Japanese with subs or in a decent American dub, but the dialogue in the dub is very tame while the subtitles have Saki cursing like a longshoreman, even dropping "motherfucker" a few times. I don't speak Japanese, so I can't tell you if the subtitles accurately reflect what's being said.

As is common for this kind of flick these days — AZUMI (2003) and CUTEY HONEY (2004) being two prime examples — a hot pop star was cast in the film's lead, in this case the cute-as-a-bug's ear Aya Matsuura, one of the looooooooooong line of J-Pop idols who are mostly indistinguishable from one another. 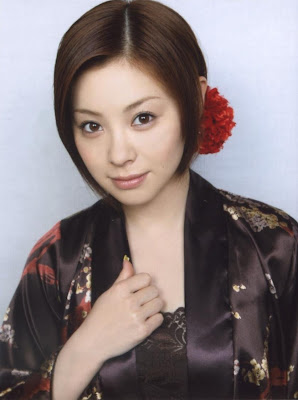 I can't speak for her singing talent since I've never heard any of her recordings, but I can tell you that she's a better than competent superhero, infusing her performance with a cold and hard-edged way of carrying herself that belies her pixie-like adorableness. I totally believed her in the role and would like to see her return for an even more violent sequel.

So, yeah, I'm recommending this bit of celluloid cotton candy. It's fun for fans of the genre, and I very much suggest that you let your daughters see it since there have been very few examples of womanly badassery since Xena rode off into the sunset (yeah, I know she got horribly killed, but I don't like t think about that). Definitely worth the rental price.