COLLECTED EDITION OF THE YEAR: THE COMPLETE TERRY AND THE PIRATES VOL. 1 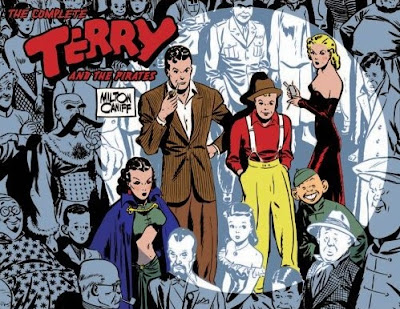 This seminal yarn of far-Eastern piracy, hot babes, and ass-whuppin' got off to an uncertain start in October of 1934 and within a year found its footing, after which it set the template for serialized tales of globe-trotting soldiers of fortune. And it's finally, FUCKING FINALLY, being put out in six volumes that collect the entirety of Caniff's run before he fucked off in 1946 (over wanting more creative control over the syndicate-owned strip) to craft the creator-owned STEVE CANYON.

The titular character, Terry Lee, is an American boy of around eleven who sets off to China in search of an abandoned, treasure-laden mine with a map left to him by his grandfather. Accompanying him is Pat Ryan, perhaps the most archetypal daily comics tough guy this side of Roy Crane's Captain Easy and a certified chick magnet of the highest order. 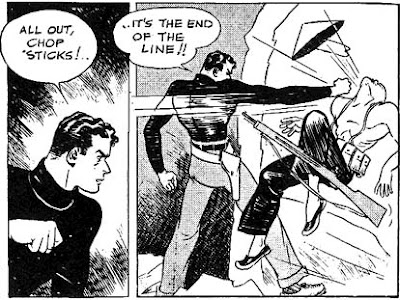 Both are extremely likable and textbook examples of the old school-style expatriate Yankee heroes who gave back to their foreign adversaries as good as they got, with Terry being the rarest of the rare in this genre: a tweener star who isn't the least bit irritating. Young Terry gets right into the thick of the action, a pint-sized bruiser with never-say-die moxie and the near-suicidal fearlessness of a Chihuahua. Terry takes it to the opposition.

As was standard for many of the comics at the time, TERRY AND THE PIRATES included an ethnic character for comedy relief — this despite the two leads being pretty good with the snarky one-liners themselves — who also served as the boys' interpreter. George Webster Confucius, better known as Connie, began as something of an embarrassing chink stereotype, and while his malapropisms, fortune cookie philosophizing, and occasional outright cowardice initially made him the Chinese answer to Stepin Fetchit, Connie in no time evolved into a full-fledged third musketeer and indispensable member of the cast.

Perhaps no other character of color in popular entertainment back in those days, especially one who was ostensibly a servant, had the kind of relationship Connie had with his employers — well, maybe Rochester on THE JACK BENNY PROGRAM, a black manservant who was only prevented from comedically telling his boss to go fuck himself by the convenient existence of the Federal Communications Commission — so when you read this stuff keep in mind that it was a product of its time, and what Caniff did with Connie was quietly revolutionary in its own way; whether the boys got into a tough scrape or basked in the lap of luxury — during the approximately three minutes they'd get to enjoy the royal treatment before having to once more put foot to some miscreant's ass — Connie was with them as a more or less equal partner.

The adventures shared by the three soldiers of fortune carried them all over what was then the "mysterious and exotic" Orient, always involving much seafaring and running afoul of then-modern-day pirates of many larcenous and murderous stripes, and often somehow managing to find hot chicks for Pat, and much later Terry, to be seduced by.

Yeah, TERRY AND THE PIRATES pretty much introduced to the comics page a hot-blooded and sexy element that was every bit as humid as its locales, and Caniff's illustrative chops allowed him to breathe life into a bevy of two-dimensional sirens and femmes fatale during his twelve-year tenure on the series. In the first volume alone we meet blonde Dale Scott, captain of a tramp steamer who's on board for the first story arc, rich-bitch heiress Normandie Drake — a character so lacking in common sense that I wanted to see her dismembered and fed piece by piece to sharks so we'd be sure she was dead — who falls hard for Pat's charms while waffling back and forth between the slap-worthy and obnoxious snottiness of the privileged to the gushing puppy love of an adolescent (she's described as not quite being "of age," so I guess she's supposed to be just shy of eighteen; anyone know the legal rules on that as they applied back in the mid-1930's?) — and the two women who forever changed the comics' interpretation of strong female characters, namely sultry white chick Burma — who's so wet for Pat it's almost hilarious — and the justly-famous she-pirate/warlord Lai Choi San, better known to comics-fans and civilians alike as the Dragon Lady.

That inscrutable sexpot and scourge of the China seas, the Dragon Lady.

The less said about the latter two, the better; read the book and discover for yourself why they totally rocked, but it's fair to say that much like Betty and Veronica in the myriad of Archie comics, you're certain to fall in love with one or the other. As a kid, during my limited exposure to TERRY AND THE PIRATES, I leaned toward the Dragon Lady — I can hear Jared screaming, "There's a shock!" — both Caniff's original and Wally Wood's borderline-pornographic parody version, the Dragging Lady from the early MAD's "Teddy and the Pirates," but now that I'm older I may be swinging toward Burma... (When you've read this stuff, please write in and let me know which way you find yourself leaning.) 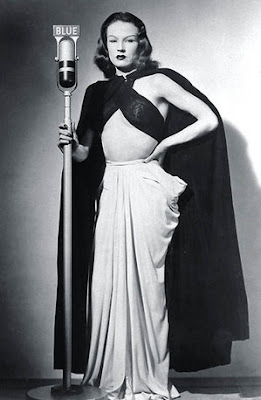 Marion Sweet, the voice of the Dragon lady on radio. 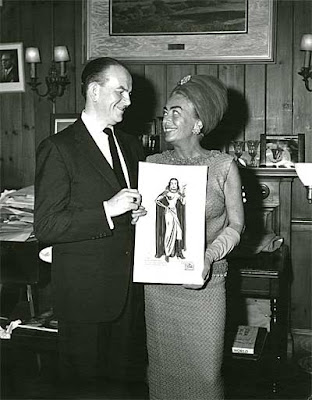 Creator Milton Caniff with the inspiration for the Dragon Lady, — I shit you not — Joan Crawford.

This first hardcover volume, published by IDW, is 370 pages long, chock full of sheer entertainment in which we see Caniff evolve as both a storyteller and illustrator — whose style was immeasurably influential and was shamelessly ripped off for decades — along with an in-depth look at Caniff's pre-TERRY work, and is a bargain at roughly fifty bucks (you can get it much cheaper at Amazon.com, but it's so good it doesn't feel like you've paid even two cents). I can't wait to read the more of this stuff, an epic that is arguably the Rosetta Stone of the pre-WWII adventure serial, paving the way for its descendants, most notably RAIDERS OF THE LOST ARK and Indiana Jones, a character in whom I see more than a little bit of Pat Ryan. Simply put, this one gets my vote as the collected edition of the year. HIGHEST RECOMMENDATION!!! 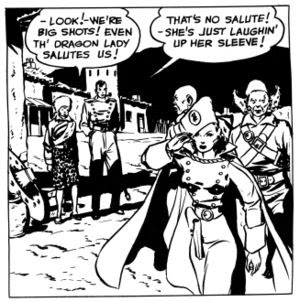