For the past few days I had been weighing an option faced by many middle-aged men, and after getting a second opinion from a person whom I respect, I have taken what could be a permanent course of action. In four months I will be forty-six years old and I still haven't quite wrapped my head around the fact that I'm really that old, but the natural aging process reminds me almost daily that the bloom of youth is fading and that certain changes must be addressed and applied. Fortunately the situation I was mulling over was in no way threatening to my well-being, but rather a case of personal aesthetics.

My formative years took place during the era of "black is beautiful," a theoretically excellent period in which American black folks were encouraged to embrace our own awesomeness and differences from the rest of the melting pot. Not at all a bad idea, and one of the things we encouraged ourselves to do was the embracing of our famously kinky hair and grow it out into a "natural" that eschewed ages of wearing it close-cropped or straightened via "the Process" in a presumed attempt at denying our ethnic roots (translation: "trying to look white"). During the decade spanning the late 1960's through roughly the late 1970's, the "natural" Afro was everywhere and the more ginormous and spherical, the better. Notables like Angela Davis rocked 'fros that looked like they had spongy, ebony Death Stars organically sprouting from their skulls and it was not only visually impressive, it was downright fucking majestic. They were a powerful visual symbol of freedom and soul, and its like has not been seen or felt since. Those examples of cranial topiary made their hippie-era wearers resemble proud lions or some grand creature from ancient myth, and no rocker of the Afro style had a greater impact on me than Jim Kelly, the super-cool black co-star alongside Bruce Lee in ENTER THE DRAGON (1973). 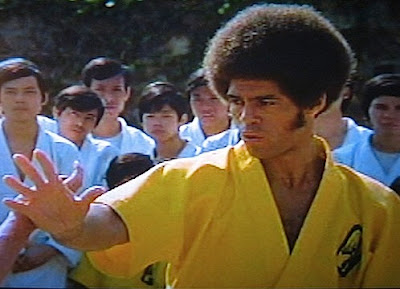 Jim Kelly, my Afro role model, as seen in the classic ENTER THE DRAGON (1973).
I didn't see ENTER THE DRAGON until I was fifteen but I was quite familiar with the visual of Jim Kelly, thanks to his ubiquity in the era's numerous martial arts magazines. Even mere static pictures of the guy gave off a near-palpable aura of refined martial cool, in essence making him a sepia analog to Bruce Lee, and upon reaching that point in adolescence where one seeks to in some way glean a measure of cool from their pop culture idols, I claimed Jim Kelly's awesome warrior 'do as my own follicular template. Once I was finally allowed full autonomy over how I wore my hair, I went for the Jim Kelly look with a vengeance and it took me nearly two full years of letting it grow wild before it reached the desired sphericality. Once it was more or less where I wanted it to be, I swear that shrubbery-like coiffure fueled my young man's piss-and-vinegar attitude and served as part of what made me visually unusual and an individual in my hometown (as though simply being a Negro in that locale was not enough to accomplish that) and on the campus of my university. A surprisingly erudite wildman a la the post-Shamhat Enkidu, if you will. 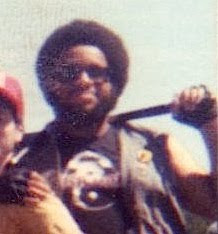 The young, sword-wielding Bunche during the late summer of 1986: rockin' the 'Fro and living as a free-spirited, merrily-stoned, aspiring warrior-artiste.

But, as with many things we admired and aspired to until we gained wisdom and fully understood them, the "natural" was anything but what our ancestors in the Motherland wore. The simple reality of the situation that Africa is hot. Really, really fucking hot, and maintaining a basketball-sized head of thick, woolly hair is not only potentially unhygienic, it's also hot and uncomfortable as a motherfucker. Hence native Africans since Day One having the good sense to either keep their hair cropped super-close or non-existent altogether. The shit I and other black kids of my generation grew up seeing depicted on a plethora of cheesy black light posters — comic book-style images of proud Nubian men and women with idealized physiques, sporting faux "African" garb and planet-sized hair, while herds of zebra ran across an idyllic veldt; images less realistic than those seen in the Black Panther's Wakanda — was therefore complete and total bullshit, and even if our parents knew that, they kept mum in order to instill in us a sense of pride that was lacking for many of them as they grew up under segregation during the dire pre-Civil Rights days. I can get behind the intent, but no one told us that the perfect 'Fro was largely a fantasy, and a fleeting one at best, and discovering that is a good hard kick in the skull to those of us who put in the time and effort to cultivate and care for one. 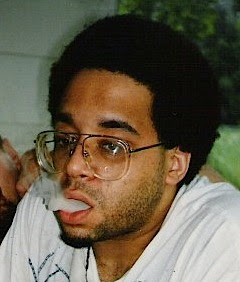 Yer Bunche in the late 1990's: hair so thick, you could have dragged me by it behind a tow truck and it would have remained attached.

As I entered into my late twenties and early thirties, I grew weary of maintaining my full-on 'Fro and I began to experiment with either shaving it outright — my first attempt at which I achieved by shaving my head smooth with a couple of those cheap plastic disposable razors, resulting in my friend Jared correctly observing "You look like you got into a fight with a cat and lost" — or wearing it in the occasional "'Frohawk" style.

The "'Frohawk," circa Halloween 1997: note the height and thickness as seen when not obstructed by having hair on the sides of my head.
Then — I'm not exactly sure when — I realized it was much easier and far more comfortable to simply shear it all off with a buzzer and render my skull completely smooth with a razor in the shower. I felt cool with that because I was no longer a kid trying to figure out how to be a man, and black men happen to look pretty good bald. Plus my hair still grew back with considerable zeal, so if I wanted to return to the full wool, why not?

Then came a summer afternoon two years ago, when my mom came into the city and we wandered about lower Manhattan, eventually stopping for a rest in Washington Square Park. As we sat in the sun, I ran my hand through my hair and noticed how thin it was in some areas. I remarked upon this to my mother and after a moment she said she'd noticed that my once-luxuriant mop showed through down to the scalp here and there, but she had been loath to say anything. Following that I went home and snapped a shot of the back of my head so I could have a look-see and judge for myself. What I saw confirmed what I'd feared, specifically that some of my hair had reached the consistency of cotton candy and that while it was not falling out in hunks, areas of it simply did not grow past a certain point anymore. Thus it was that I began either shaving my head bare or steadily keeping it buzzed very close.

I let it grow in in full starting in early October in anticipation of winter, but again I felt the area of sparseness and contemplated just lopping it off again. I kicked it around and around, again photographing the back of my head for visual reference, and finally I asked my dear friend Sukihoshi for her opinion when she came over the other night. 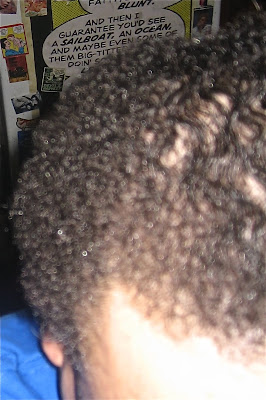 Late on Sunday afternoon: my amazing see-through 'Fro.
She appraised my noggin and blithely said, "Aah, just cut it off." I took that to heart and waited until early yesterday afternoon to hit my skull with the buzzer and then hit the shower with my Gillette Mach-3 razor in hand, and now my cranium is once again as smooth as a boiled egg, shorn for what just may be the last batch of hair that I allow to grow there for more than a month. 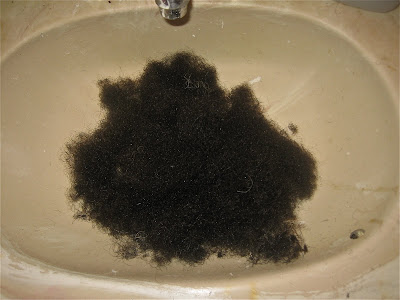 My just-buzzed-off hair in my bathroom's sink. 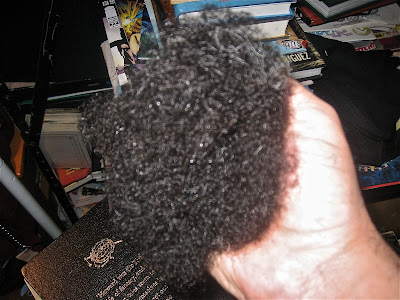 What may be my final batch of shorn longish hair, looking for all the world like a Tribble as played by Clarence Williams III. 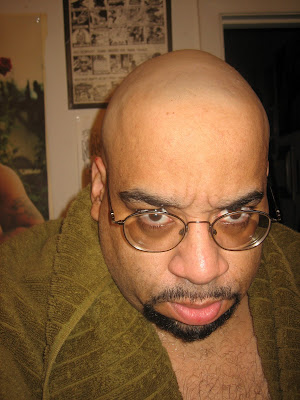 The return of the "smoothie"-style Bunche.
My bushy hair and I certainly had our fun over the years, so really I don't regret ridding myself of it, but doing so is kind of an admission of defeat at the hands of the turning of the years. Oh, well. At least I did once get to have my hair at a good enough length to wear a Devo energy dome during one of the band's shows on a very humid summer day a few years back, and the humidity and the plastic helm's shape teemed up to effortlessly shape my Afro into a naturally-occurring new wave ziggurat. A good memory, and here are the photos to preserve it. 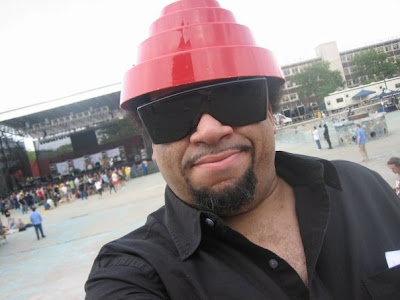 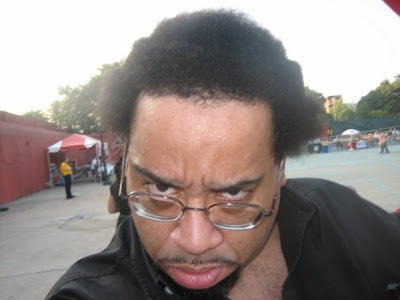 I can't believe you lost the iconic fro. I don't know how I feel about that but now you look like a Shakespearean actor now.

Fuck it, just embrace the Hemsley.

*laughs* I would say I can't believe you just made that pickup truck joke, but this is YOU we're talking about here. :)

For my vote, I like the baldian Bunche look. It's kinda badass.

Looks much better this way. Receding hairline and gray hair ruins an afro