THE NY TIMES REPORTS ON CHANGES TO BE MADE TO SPIDER-MAN: TURN OFF THE DARK 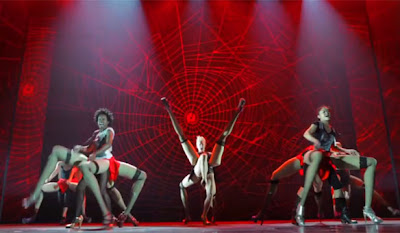 "Deeply Furious," aka the infamous "shoe chop" number, is wisely being cut from the show.

The NEW YORK TIMES has an article posted that outlines some of the changes being made to SPIDER-MAN: TURN OFF THE DARK in the wake of the justly-disastrous near-universal panning the show received from theater critics (and gobsmacked bloggers like Yours Truly), and all of the tweaks sound like wisely-chosen improvements. Chief among them is the reported excision of the fucking ludicrous "Deeply Furious," what I refer to as the infamous "shoe chop" number, and while I think that choice is by far the smartest creative decision yet made on this show (next to the ousting of director Julie Taymor), I hope to the gods of theater that someone recorded it on video for posterity. No lie, it was hands down the absolute worst professionally-executed musical number I've ever witnessed during nearly a lifetime of seeing Broadway shows (I've been at it since I was nine). Anyway, go here for the details.
Posted by Bunche (pop culture ronin) at Friday, March 11, 2011

Say it use to be infamously bad? Damn... then it's a universal right to be seen, and if it does exist and someone did taped it then -mark my words- it'll become a cult thing to see it, that and a must for aspiring directors who want to now what not to do. hehe