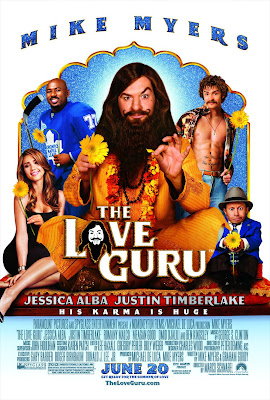 There are bad movies, and then there are BAD movies. THE LOVE GURU falls into the latter category with the presence and implacable authority of a vast black hole, only this particular singularity sucks up comedy into some other realm that is anywhere other than onscreen. Truly, there is nothing more pitiful in all of cinema than an unfunny comedy. At least with a bad movie in any other genre, there's the possibility that you might gather some unintentional laughs from the cinematic grunt biscuit in question, but an unfunny comedy is a failure at its own raison d'être and just lays there onscreen like a dead cat on the side of the road. That said, I watched the universally-reviled Mike Myers vehicle THE LOVE GURU and it is simply one of the very worst alleged comedies ever purported to have been made by humans. In fact, it's so abysmally godawful that I actively recommend it so you can see with your own eyes that such a thing exists.

THE LOVE GURU was apparently intended to be Myers' next franchisable creation in the wake of his Austin Powers success, but it's a very lazy rehash of many of that series' tropes that were played out to death in those films in the first place, so dressing them up in the guise of a piece about a stereotypical platitude-spouting India-raised guru-type fooled no one and led to a swift box office death. The story relates the adventures of the guru Maurice Pitka (Myers), one of those fluffy maharishi-style hucksters who dispense dime store "wisdom" to eager Western audiences who hang on their every utterance as though it came straight from the mouth of the goddess Saraswati herself, a supposedly enlightened holy man who proves himself to be full of shit by desiring to be a bigger exponent of Eastern wisdom than Deepak Chopra. Pitka is hired by Jane Bullard (Jessica Alba), the corporate bigwig behind the Toronto Maple Leafs hockey team, to counsel star player Darren Roanoke (Romany Malco) through his serious relationship issues with his nubile girlfriend (Meagan Good) and restore his winning chops in time for his team to win the Stanley Cup. 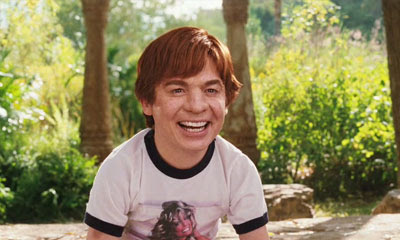 The disturbing visual of the twelve-year-old Pitka as seen during the sequence explaining his origin. It's clearly supposed to be funny, but it's just plain creepy.

The incongruous fusion of sports gags and spiritual counseling humor does not work in any way and the viewer does not care one whit for the hockey star's predicament, the fate of the team, or Pitka's attraction to Jennifer. There's nothing here that engages the audience, and what we do get is just a seemingly endless regurgitation of wordplay, innuendo and sight gags that were already run into the ground in the Austin Powers movies. To reinforce the Powers connection, the former Mini-Me, Verne Troyer, is on hand as the Maple Leafs' coach, and his presence guaranteed an avalanche of tied and very predictable dwarf-related "jokes." If the goal there was to get us to understand how sick Troyer must be of such jibes after a lifetime as a little person, then the filmmakers succeeded in spades.

There are endless fart jokes, dick-and-balls jokes, turd gags, urine bits, and god knows what all else, plus the admittedly original sight of two Indian elephants fucking during a crucial Stanley Cup hockey game in order to cause a distraction, and not one bit of it is funny in the least (although the elephant bit gets points for coming from out of nowhere). There are also two appallingly unfunny, self-indulgent and overlong musical numbers in which Myers (as Pitka) performs the title song from 9 TO 5 and Steve Miller's "The Joker" with sitar in hand, and the latter number is staged as a full-fledged Bollywood-style musical number featuring several of the main cast. It was like attending a supposedly-fun party where everyone else knew each other for ages and were all in on some over-arcing private joke, with you left on the outside with no explanation. See for yourself:

Sadly, during the entirety of the film there were only two things that genuinely made me laugh out loud:

I've seen a lot of Indian films, dating from the 1940's through the present, so I'm very familiar with them and I find the more over-the-top examples of the form to be lysergically insane and fun, and this bit nailed that aesthetic perfectly. Unfortunately, hilarious though it is, that sequence lasts for around a minute, maybe a tad less.


So, for me anyway, THE LOVE GURU amounted to a grand total of under two minutes of legitimate laughs out of a running time of eighty-six. I recommend this only for bad cinema completists, masochists, or insomniacs. And I can honestly say that even the most rabid and sophomoric of Mike Myers' fans will be disappointed by this one. I hope his next film — if he ever makes another one — will be informed by the mistakes made and lessons hopefully learned with this unmitigated disaster.
Posted by Bunche (pop culture ronin) at Friday, March 18, 2011

Watched the remake of I Spit on Your Grave this weekend. You were right. Quite well-made, a quantum improvement over the original, and seriously hard to watch.

Thanks for the recommendation... I think.

I got, oh, 40 minutes into this movie, just dumbstruck at the endless parade of dick jokes and puns.

I think the scene that really summed up the movie was Mariska Hargitay's cameo. Now, normally, with a gag like everyone saying "Mariska Hargitay" like some profound thing, you want to keep the inevitable payoff toward the END of the movie, so it's funnier after building for 90 minutes. But no, Hargitary's there in the first 15, having no issue with everyone saying her name and willing to kiss the ass of Guru Pitka like everyone else.