HOW TO MISCONSTRUE A FILM TITLE 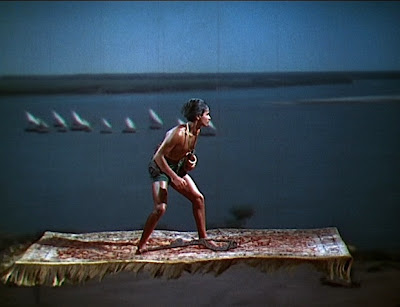 Sabu as the titular Thief of Bagdad...Or is he?
I recently received the visually incredible Criterion edition of the excellent live-action fantasy classic, THE THIEF OF BAGDAD (1940) — which I very strongly suggest that you purchase before it goes out of print and becomes a pricey collector's item — and it made me ponder something.

If you live virtually anywhere in the continental United States and have ever gone to the movies, you have likely encountered my fellow Negroes — and if truth be told, sometimes me — offering blurted-out and sometimes hilarious commentary on whatever film you may be seeing in the theater. I'm wondering if, seventy-one years ago when THE THIEF OF BAGDAD first opened, some dissatisfied black dude exclaimed aloud as the words "THE END" appeared onscreen, "Man, that muthafukka didn't steal no Bagdad! That's some bullshit right there, Jack!"

I can also see a similar scenario taking place at the conclusion of the recent WINTER'S BONE.
Posted by Bunche (pop culture ronin) at Monday, March 07, 2011