TAKE THAT, SPIDER-MAN: TURN OFF THE DARK — THE ZERO-BUDGET SPIDEY PROJECT JUST MADE YOU ITS BITCH 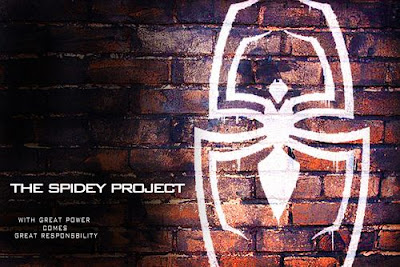 And so it was that improv performer/playwright Justin Moran and co-writer Jon Roufaeal's $0-budgeted "guerilla theater" musical THE SPIDEY PROJECT: WITH GREAT POWER COMES GREAT RESPONSIBILITY had its scheduled two-performance run, going from conception to opening in just over a month while its bloated counterpart missed its last announced opening date and has been pushed back until mid-June. I was wowed by the colossal elephant balls of such a concept and was even more blown away by the fact that this little musical, seemingly pulled from out of nowhere and fashioned together from baling wire and chewing gum, was in just about every way superior to the much-hyped, ever-in-the-headlines disaster currently stinking up the place at the Foxwoods Theater. I wish I had acted quickly enough to snag tickets for the show but I didn't hear about the free tickets being made available online until it was too late, so that was that. Thankfully, the show was captured on video for posterity and posted on the Internet, so here it is in its entirety.

THE SPIDEY PROJECT: WITH GREAT POWER COMES GREAT RESPONSIBILITY is galaxies better than the Taymor/Bono fiasco, costing quite literally cost zero to make (as opposed to the $65 mil and counting thrown into the other one) and featuring a cast of a mere nine performers. Every element that was missing from the money-pit would-be blockbuster is here in a far humbler and infinitely more genuine and entertaining form. In fact, the only thing — the ONLY thing!!! — the big Broadway monument to excess has over this David to its Goliath is impressive sets and legitimate costumes. I can think of no better critique of SPIDER-MAN: TURN OFF THE DARK than to have a pack of zero-budget upstarts take it to school by reminding us all of what live theater is really all about: heart.

Here's the whole thing in four parts. It's only around an hour in length and I heartily urge you to watch it. And to all involved in bringing this to life, you have my deepest thanks and respect for essentially kicking an over-inflated "titan" square in the batch. I know you did not mean to rip Taymor a new one, but this meager-yet-excellent work serves as a reminder that hubris is usually one's own worst enemy. Bravo!

Funny, catchy tunes, clever staging. Everything that the other Spiderman show wishes it were. Too bad it only ran a single weekend.

I rather liked that. Thank you for sharing Lord Bunche. I still want to see the disaster that is "Spider-Man Turn Off The Dark" but no way will I pay the full price. I don't think it will remain open long when it finally "premiers".