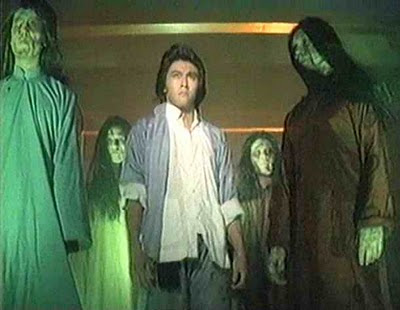 I first heard of this one while watching the fight scene highlights videotape THIS IS KUNG FU with a bunch of equally-stoned friends back in 1989, and we simply could not fucking believe what we saw when the tape opened with the literally jaw-dropping trailer for this flick. Along with all manner of bizarro Chinese mythology-specific creatures and weirdness, the trailer featured tag lines that mangled the English language to an alarming degree (example:"Ghost seeking revenge evils are deadly scared!" and "Human heart annoying both spirits and human!), and my friends and I watched the trailer over and over in disbelief, vowing to someday find and watch this surefire classic of lysergic chopsocky madness. 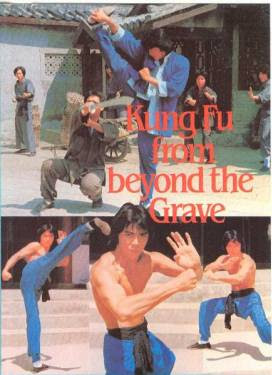 Packaging art for the Ocean Shores VHS release from the '80's, a tape that took me two years to track down.

I finally found the movie about two years later in a cheesy hole-in-the-wall video store that was going out of business, a victim of the Disneyfication of Times Square and it cost me around ten bucks (about five bucks too much for a beat-up used copy), but I finally had the object of my relentless quest. The wait was worth it, because the martial arts were pretty good and the script is a ludicrous dialogue fan's wet dream.

Starring Indonesian martial arts cult figure Billy Chong — who starred in the rather similar, though way more coherent, KUNG FU ZOMBIE (also 1982) — the film chronicles the young hero's quest for vengeance against the rat bastard who murdered his father, a quest instigated by the pissed-off ghost of the hero's dad. The murderous rat bastard is played by none other than Lo Lieh, star of the film that kicked off the 1970's kung fu movie boom, the classic FIVE FINGERS OF DEATH (1971, released in the U.S. in 1972), but here he's playing one of his many, many outright villains and it's always a pleasure to see him be just plain unabashedly evil. Realizing that the son may come after him and hand him a well-earned ass-kicking, the bad guy hires an evil kung fu priest/sorcerer to handle things for him, and the evil sorcerer gets up to a shitload of black magic and suchlike over the course of the film, including one of the most memorable (to say nothing of ludicrous) moments in the entire history of cinema. The prize goes to a scene wherein the villainous sorcerer realizes he's about to get his ass kicked, so he throws some spells into the air and screams "Count Dracula! Come to my aid!" The second he says this, the sky turns to night, the full moon pops up, a wolf howls and then from out of nowhere fucking Count Dracula himself — the only white guy in the entire film — swoops from out of the sky screaming "I'M COMING!!! HAHAHAHAHAH!!!"

The justly infamous Count Dracula sequence.
And don't ask how the hero and the eerie aides he gathers finally defeat the sorcerer (hint: it involves the aid of a bunch of prostitutes who are experiencing "monthly women's concerns"). To say more would give away shit that you just won't believe, so I leave you to rent this and discover its ultra-bizarro wonders for yourself. Illegal smokables and alcoholic beverages are recommended for maximizing the fun, and it's a real crowd-pleaser/baffler when shown to a roomful of willing attendees. A unique cinematic experience, TRUST YER BUNCHE and snag this one as soon as possible. 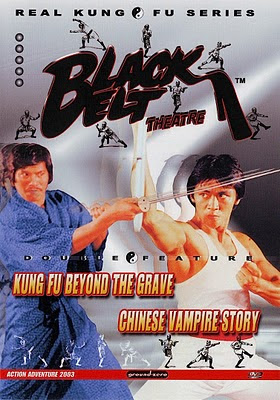 Packaging art for the most recent DVD release. You'll note they got the title wrong.
Posted by Bunche (pop culture ronin) at Tuesday, March 08, 2011