A BRUSH WITH GREATNESS: THE DAY I MET GG ALLIN 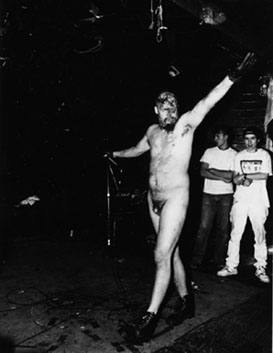 No, that isn't a Skittle. It's his dick.

Some called him a visionary rebel, out to save rock 'n' roll from the pussified product that it has become, a righteous firebrand who sought to restore danger to the form. Then there are those of us who thought he was a sociopathic idiot whose beyond-offensive musical stylings and on-and-offstage antics were downright hilarious. Yes, I am talking about the late, "great" GG Allin. And who the fuck, you may ask, was GG Allin? His story is too bizarre and involved to go into here, so I refer you to Allmusic for a very much to the point bio on the guy. I mean, you're pretty much doomed to be a fucking freak when your religious fanatic dad actually names you Jesus Christ Allin... 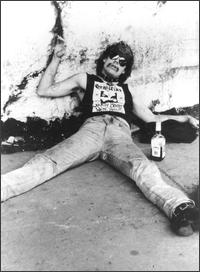 I first came across GG's recordings in the summer of 1987 during a trip to New Haven, Connecticut's Rhymes Records, a now defunct establishment that housed one of the best vinyl selections on the East Coast. Ever on a quest for the most offensive music I can find, I stumbled upon a "greatest hits" collection entitled "Dirty Love Songs," and was simply gobsmacked by the content; the album opened with "I Wanna Fuck Myself" (a heartfelt ode to jacking off) and continued to astonish with such anti-hits as "I Wanna Rape You" — a very strong contender for the "honor" of being the most offensive song of all time — , "I Wanna Piss On You," "Needle Up My Cock" — a cautionary ditty about the dangers of venereal disease — , "I Fuck the Dead," and many, many others. And on top of all that filth, the album opened up into a big poster of Allin onstage, shouting into a microphone while apparently attempting to rip off his own peanut-sized dick. How could I not add such a treasure to my collection?

In short order I went on to collect pretty much the entirety of the guy's output — a staggering waste of money or a bargain, depending on your point of view — and found other music deviants who enjoyed Allin's work for the same reasons I did (huge shout-outs to Smokey and Tanya!!!), while simultaneously nauseating many of my friends in the process. As the years passed I followed Allin's "career," marveling at his idiotic boasts of how he would one day kill himself onstage as a sacrifice to rock 'n' roll, taking as many of his fans with him as possible, and wondering what would become of him after he was released from a prison term for torturing one of the aforementioned worshippers.

Then, in 1993 filmmaker Todd Phillips released HATED, a must-see (or not) documentary on GG Allin. Several of my friends and I decided to attend the Manhattan premiere of the film at the Lower East Side's Anthology Film Works, and girded ourselves for the event with several rounds at our oft-frequented haunt, Nightbirds. As we drank, only my friend Smokey and I were flat-out determined to go to the film, the rest of our crew opting to hang out at the bar instead, so he and I sauntered over to the movie house where both of us were shocked as a motherfucker to find that GG himself was there, greeting his fans in the lobby. 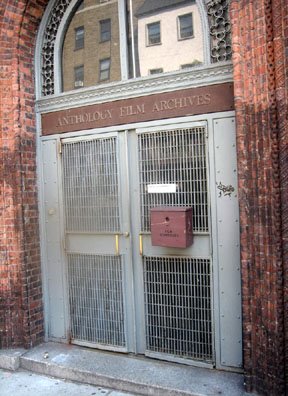 The site of my brush with the artiste.

GG's notorious lack of any kind of personal hygiene was immediately self-evident because the guy smelled like a piss factory, but I was surprised to find that despite his unpredictable, animalistic nature the guy was really friendly. Maybe it had something to do with the fact that he was clearly out of his mind on God knows what? I dunno...

Anyway, I asked GG to autograph my sketchbook. He cheerfully took it from me, and as he wastedly scrawled all over the page he announced, "This is how it was in the past. Here's how it is in the present, and here's how it's gonna be IN THE FUTURE!!!" With that he thrust the sketchbook and pen back to me, and shakily wobbled into the auditorium to watch his own chronicle unspool on the pitiful screen. The documentary was a lot of fun, and I highly recommend it to those brave enough to witness its myriad horrors.

Afterward, Smokey and I raced back to Nightbirds and told our friends what they had missed. Needless to say, they were kicking themselves for the rest of the evening.

Then, a little over a month later on the day after my twenty-eight birthday, GG Allin, the man who would supposedly off himself in the name of rock, died from a heroin overdose following a performance the night before. Say what you want about the guy, but the irony of his demise being that of the common, garden variety rock star douchebag was pretty fucking pathetic, and perhaps the only appropriate coda for rock 'n' roll's most outrageous professional, literally shit-eating asshole.
Posted by Bunche (pop culture ronin) at Tuesday, August 01, 2006

Gg allin was a queer , pervert , sissy , afraid of everyone , loved eating shit , nasty should have been shot on stage by 10 people with guns while he ranted